Beginner friendly way to get a cheap army, that can support your goal of becoming a Lord and gain fiefs and recognition in the land of Calradia.

The Army of Freemen

But why you say?

Because the game at the moment is not hard, the AI leaves a lot to be desired and if you spent a little time trading you can buy the best army and even buy Towns and be the Overlord of all Calradia. continued at the bottom for those who want to know more.

Do the first tutorial, you will learn how to fight with all the weapons and make sure you become proficient with them and not just see how they work.

Then go out and do the first quest with chasing the raiders and attacking their hideout, you will need the lessons learned here for later, when you make taking down hideouts part of your strategy.

In the end you will have gathered all your troops for free and can keep the ones you like and dismiss the ones you don’t like or don’t want to pay their wages. 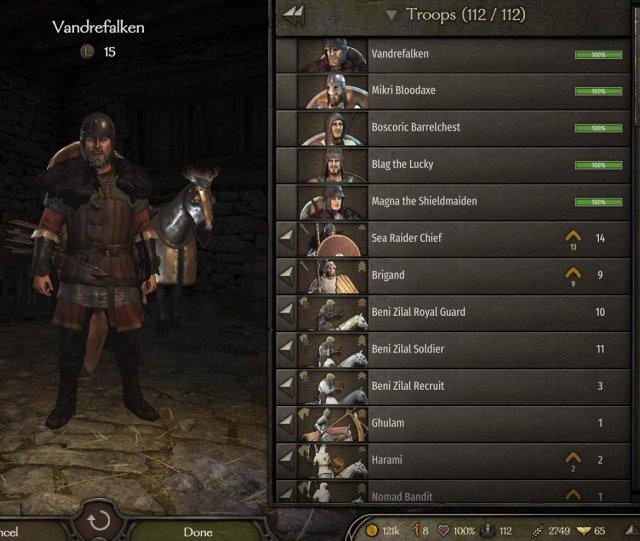 Now for the early game you can make money trading and there are several really good guides for this, so I will skip that. You can also make money from winning Tournaments if you are good at that kind of fighting.

Here I will give you tips to gather a cheap army, just for the fun of it.

When you travel to trade look out for looters and when you see small groups that you can solo take them down, this gives nice boost of exp and a bit of loot. Keep the looters taken prisoner in your train. Don’t sell them for cheap, you will use them when they want to work for you but no sooner than you meet a large enough group of looters that you can not solo, now just before engaging them hire all the looters that wants to fight for you from the prison train. Soon you will be able to take out roaming bandits. 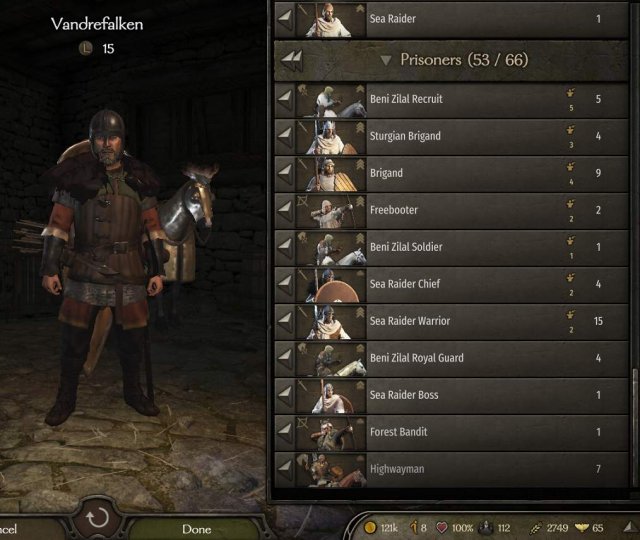 When you come by hideouts, first make sure it is doable and if they have captured peasants or soldiers, if not leave them alone and keep trading. On your travels hunt roaming looters that cross your path, for the exp and a bit of loot and its a big bonus if they had captured some peasants. Keep the peasants.

Keep checking up on the hideouts during travels and take them down if they got captured peasants or soldiers, and if they are to many then come back later when some might have left the hideout. The newly freed will join you for free and while you have to pay any soldier you get this way a living wage, peasants you get will work for food only.

Lets take a look on the peasant as a soldier!

Enemies will usually split all missiles towards you, its safer for you and your higher tiered troops to have some fast moving targets out there dodging and sometimes catching missiles. Surprisingly you are the only target that enemy AI will hit consistently but never the peasants or other fast moving foot soldiers.

Seems we are always the slowest and therefore will catch most of the missiles.

Bandits what are they good for and do we need them.

Bandits you get from the ones taken prisoner, and later on when catch up with the bandits, sometimes they will rather join you than fight. Bandits make for fine soldiers and you never need to upgrade them even when you can, unless its the Hillmen you should either upgrade him if you need more soldiers or dismiss him if you don’t need extra men.

The Mountain Bandits have javelins and the Highway Men have horses and javelins both soldiers are very deadly, just make sure you throw the javelins at early fight when enemies are still bunched up in formations. Its a kill spam if the enemy is holding in a circle formation.

The Forest Bandits are really good archers not much else to say about them, Archers are the bane of everyone in Bannerlord, when its not javelins killing you its arrows to the face..no not the knee.

The Desert Bandits are also very good javelin infantry and javelin horsemen, equals to the Mountain Bandits and the Highway Men.

The Seafarer Bandits are not so good early on because even at tier 3 they lack shields but they are deadly with their javelins and its best to keep them in a second line behind the other javelin men. At tier 4 they do get a large shield and become very good 1vs1 infantry.

The Steppe Bandits are the hardest to fight, so make sure you only go into the hideouts that you can take out, but once you get some of them into your army you become close to invincible.

Now you have an army made up of tier 0 Peasants, tier 3-4 Bandits and tier 5 Hideout Bosses or an even cheaper army that work for food only, yes a full army of Peasants. I would advise against taking a Peasants Army anywhere without being part of a Field Army. That way you get the protection needed, you fight in the Sieges and you will one day get a fief without ever having spent a single gold on hiring a soldier or paying wages if you chose the Peasant Army.

Hideout tactics, you can use Z to crouch and sneak closer

All the different hideouts have a simple way to take them down, you can watch some really good videos on YouTube. They are a bit cheesy tactics involved but then again I currently consider the hideouts to be broken. I cant choose the 9 men that has to go with me on this life or death mission..but why? So cheesy or not, I do the hideouts my way.

But why? Continued from top.

I did my first play through without buying any armour or weapons for the longest time, just relying on the loot and it was fun to see if I got something good this time. In all of the battles I got like one so and so helmet and one so and so weapon.. really a big let down!

In contrast Towns are full of weapons and armour and will make the game seem done in no time, if you buy items.

I didn’t spend so much time trading and had over 600.000 gold at one point, like why I get so much money from mostly really crappy battle loot. I would rather have some good armour and weapon drops.

I got two Towns and one Castle without doing much else than showing up for the Field Army exercises, most fights where very one sided, the few that could go either way, you can change by being one of the Commanders controlling the Field Army Cavalry and just stomping everything. Cavalry cant really be stopped by AI infantry or Archers. So when they are done you can hunt down the last enemy Cavalry.

Mount & Blade II: Bannerlord – How to Get The First Lord to Join Your Kingdom