This is newbie Rakshasa guide.

Rakshasa is a very fluid, mobile class with almost too many iframes. It is capable of doing top tier damage and the only weakness is subpar grouping.

It’s my opinion that Rakshasa is one of the most difficult classes to both learn and master, given her unique and rather unintuitive mechanics. This guide thus serves the purpose of providing you a general idea of how the class works and how to better play it.

This is the first of three main damage skills. A low cooldown combined with rather absurd damage makes it a must have for any valk that wants to efficiently do damage.

In Violate Stance charging this skill will put you in the air.

In Voluptuous Figure the skill has decent range.

In Violate stance this skill sends you forward a good distance. It can also be used in midair and is decent for grouping.

In Voluptuous Figure you swing in a circle, so it’s a good skill for hitting enemies that aren’t in front of you.

It’s a good filler skill in both stances though in Violate Stance it can unintentionally push enemies if used while midair.

In Violate Stance it’s not much good as a filler. Instead it has decent mobility and can bring you behind an enemy.

In Voluptuous Figure it’s much better suited as a filler skill since it’s faster, turns enemies around, and groups in a small area.

One of the skills that makes Rakshasa so special.

Upon casting this skill, all cooldowns except Stay! are reduced by 15 seconds (Prime 4 can boost this to 20 seconds), and you receive a 20 second buff that increases attack speed, critical rate, and, as mentioned above, boosts Wake Up!

The way this skill works is as follows:

Send You to Heaven

In Violate Stance this skill is decent mobility and can be used while in the air. You can either left click or right click after using this skill. Left click will send you down and take any enemies that you hit with you. Right click will put you behind enemies and lift you up slightly.

In Voluptuous Figure the skill does more damage and is one of the best fillers. It also has decent range, so don’t be fooled.

In Violate Stance this skill is an iframe, hits behind enemies, and can bring you behind. Usually this is the skill to use if you want to get behind an enemy.

In Voluptuous figure it’s slower, but ultra-breaks and also pulls any enemy behind you to the front.

The second of Rakshasa’s main damage skills. The damage comes from its usage in Voluptuous Figure.

In Violate Stance this skill is an ultrabreak and iframe. I’d advise against using it in this stance since this skill does so much damage in Voluptuous Figure. But it can be used in Violate Stance in some scenarios. It also has a lock on feature, so aim carefully or else you may end up missing and wasting the skill.

In Voluptuous Figure you unleash a barrage of slashes in a small field in front of you. Repeatedly pressing LMB after using this skill will extend the duration of the barrage. I recommend always spamming LMB when using this skill.

Voluptuous Figure does about 2.5x as much damage as Violate Stance if you spam LMB.

The main use of this skill will be to group enemies in Voluptuous Figure.

In Violate Stance never use this skill unless you have no other iframes available and have an enemy that can be hit. Its damage output compared to casting time is pitiful, and the iframe also does not cover the full animation.

In Voluptuous Figure this skill swings in a circle to catch enemies around you and slam them down in front. This is your best grouping skill.

You may sometimes use this skill in Voluptuous Figure as a filler, though it has a relatively long animation and doesn’t do much damage.

Unlike Make you Crazy, this skill has less grouping potential but a much better iframe.

In Violate Stance this skill will move you through the enemy while also turning them. (If you’re behind them then you’ll still be behind after).

In Voluptuous Figure your scythe gets sent out in a small line, catching any enemy that it hits and bringing them closer to you.

It’s a long iframe in both stances, but it only really groups in Voluptuous Figure. You can use awakening points to increase its damage and grouping capability.

As with Make you Crazy, this can be used as a filler in rare cases.

The third main damage skill. This is Rakshasa’s strongest skill.

In Violate Stance you latch on to an enemy and hit them three times. Sometimes the last hit may glitch and not register.

In Voluptuous Figure the skill does about 25% more damage. In most cases you want to use it in this stance. It’s also decent grouping since it’s a small aoe.

Depending on what imprints you run, this skill is potentially your largest damage contributor.

In both stances the skill will stun.

This is Getting Exciting!

This is what gives the “dancing” to Rakshasa stances.

Every Rakshasa skill you use in one stance will provide one charge to the other stance. Each stance can hold a maximum of three charges. Using a skill will consume a charge from the stance you’re in if available and cause an explosion that deals decent damage.

The idea is to change stances frequently to alternate charge stacking and charge consumption.

By nature of this skill, you will always have a 15% critical damage buff up once you use at least three skills.

If you use bottom row imprints, this skill will be a larger portion of your damage. Otherwise, it is still a good chunk, but not enough to really compete with the main damage dealers. Not yet, at least.

This skill is a long iframe, and it momentarily freezes enemies as soon as you cast it. Also has a cool animation.

Don’t use this in Voluptuous Figure, it’s a waste of EX and weaker than normal Execution. 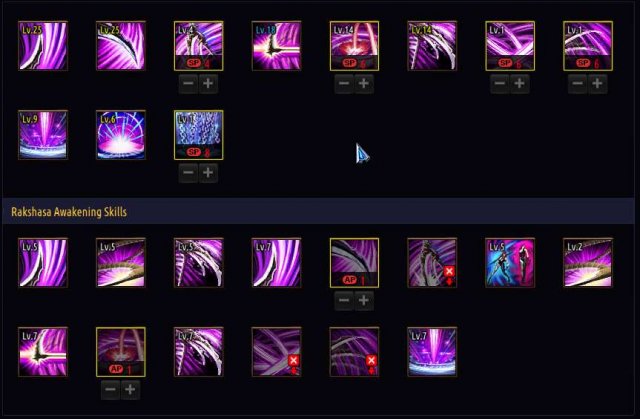 The only skills that are required to max are Wake Up!, Execution!, Get Down!, and This is Getting Exciting!. I personally max Send you to Heaven as well because it’s currently one of the best fillers.

For Awakening points, put at least one point into the stance swapping passive. Max Wake Up!, Execution!, and Get Down!. Other points are up to you. I personally like to have the Play for You awakening because it provides a lingering iframe after using the skill.

The four main skills to prioritize above all others are shown below in terms of highest to lowest priority from left to right:

*Play for You may be prioritized less than Wake Up! If you are not using middle row imprints.

Wake Up! Is unique in that it has the cooldown of a filler skill, but it does enough damage to make it a top priority.

You will notice here that Get Down! And Execution! are a higher priority than Play for You. These are the main exceptions I was talking about in Play for You’s skill breakdown. Generally if the two skills are off cooldown or almost off cooldown (1-2 seconds), then you want to hold Play for You if it’s available.

Other skills are relatively low damage filler mainly used to stack Play for You and This is Getting Exciting. What filler gets used depends on the situation and what stance you are in. There is no easy way to explain filler rotations, as they are fluid and best played by intuition.

You have a few options:

Ideally you don’t want to wait and do nothing, and Send you to Heaven is a rather poor option as well. Typically the best option is to use Lay Down if Wake Up! Was your first skill in violate stance, but sometimes you may have to just stance swap.

Alternatively you can just use Wake Up! Without charging it, though it may end up doing less damage overall since other skills can’t make up for the extra DPS a charged Wake Up! has.

The imprint descriptions are almost entirely wrong because Kritika Reboot launched with Rakshasa rework, but for whatever reason didn’t fix the translations.

When you cast (Play for You), a buff (Maximum Destruction]) is applied for 12 seconds with the following effects:

Gain has the most damage potential, but it’s not too newbie friendly. Pain is much easier to use if you’re new.

There is already a general gear guide, so I’m only going to briefly go over some of the gear interactions with Rakshasa.

Spiritual Liberation will give a reset to Send you to Heaven (and Execution! if you use the weapon). It’s otherwise a decent set since it gives Master Skill and damage type bonus.

Elemental Tuner is a viable option for Rakshasa since she has lots of passive stat buffs already.

The rest of the sets are pretty mediocre, especially so for Rakshasa since she doesn’t have many multihits, so only go for them if you like memes.

The best weapon to use is the Mythic if you can get it.

This guide will go over strictly the PvE aspect of assassin, pvp has changed in a way where i’m not comfortable telling people how to pvp with sin as i’m […]

A mandatory skeleton for the Void Monk skill build while also providing my own preferred build. And after that I’ll clarify the reasons why I chose this approach to Void […]