This guide will go over strictly the PvE aspect of assassin, pvp has changed in a way where i’m not comfortable telling people how to pvp with sin as i’m probably going to wait for 2nd awakening to do so. However this will go over recommended skill builds and what to prioritize, how bleed stacking works and what over bleeding means and how it relates to the bleeding DoT and the damage increase you get from your skills that increases as your stacks increases.

What is assassin in kritika? assassin is a burst class with a very strong DoT, arguably the strongest DoT in the game currently due to it being a percent based DoT. it’s a very hard class to pick up so keep in mind that all this information might not be easy to pick up. and by no means am i the best assassin and i will justify my skill build with all the testing i have gathered through playing this version and the eme version.

Next, with i will go over the pros and cons of assassin.

Pros: Bleeding makes it so you can basically kill almost any boss given the right time limit and survivability, very quick and easy accessibility to back attacks, very high burst dmg if the target is overbleeding.

Cons: Not very party friendly due to shadow clones can move targets, and the whirlwind shuriken also can move the boss. very high skill floor due to poor translations and bleeding mechanic isn’t very self explanatory. the sudden thrust build makes the class a very high skill ceiling because the skill does a lot of damage but you can easily lose more damage than you gain if used at the wrong time.

This section will be going over each of assassin skills and the images will display my skill points and i will also explain why i put the amount of points that is listed in the images. Skills are translated weird so the names will be based on the eme version until translation patch

these skills are mainly for bleed stacking so other than quick jab the other two should be at lower levels because its used as utility skills. you can keep quick jab at level 17 honestly to unlock the awakening for it and the awakening increases the range that u can cover with that skill.

keeping shuriken at lvl 2 allows for an additional combo and stacks one bleed per shuriken combo and using your right click allows for an animation cancel for the combo and also stacks poison on the target but the poison isn’t anything noteworthy so its just for utility.

Poison blast isn’t crazy strong but is just an additional DoT for the more beefy bosses and it lowers the target movement speed which allows more uptime for back hits. Cyclone Blade scales pretty high and is very good at controlling the boss due to its rapid hits. make sure you are maxing this skill. Storm shuriken should ONLY be use during stealth due to the stealth reset it gives you and a 2 second iframe to help you finish out your opener

Four winds during ghost assassin teleport you behind the target which allows for back hits, it is an iframe when used when your not using ghost assassin. Backslash teleports you behind the target with a slash attack and is mainly used to get behind the target. Ghost assassin is a really good skill because at max lvl it gives you 95% more dmg from back attacks and if you use the skill again while still in stealth you summon a log in place of your current position which does 10K skill dmg at skill lvl 19. imprints makes it so you summon 3 instead of one and each log has 10K skill dmg so it becomes a very strong skill.

This skill should always be cast before you engage the boss due to its cast time and most bosses end game will have timers so having as much time as you can is important. the most important part about your clones is that you should not use poison blast during it because they will move the boss out of the poison and back in which is a dps loss because they are not taking the DoT from it. at the very end of the duration all the clones will turn into logs and explode. making sure the boss stay in place the whole duration is important so that all clones will explode on the boss 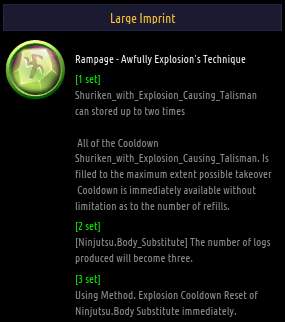 Since translations are pretty hard to read right now i will go over each set.

Overbleed – Shadow charge enables a debuff called overbleed on the target once they have 10 stacks of bleed on them. over bleeding makes the target take heavy bleeding damage overtime and it equals 22 stacks of bleed and it gains an additional 2 stacks per skill level, at level 6 it ends up being about 32 stacks of bleeds which is 22 more stacks than you can normally do. this allows for your skills that scale based off bleed stacks to do massive damage to the target.

Kill thrust – kill thrust is only for assassins that understand the basics because using this skill uses your bleed stacks and it will also end the overbleed duration on use. so being able to manipulate bleed stacks without losing uptime on overbleeding is very important when using this skill. Kill thrust does 15% more damage for each bleed stack and it also gets 100% more back hit damage when its awakened. 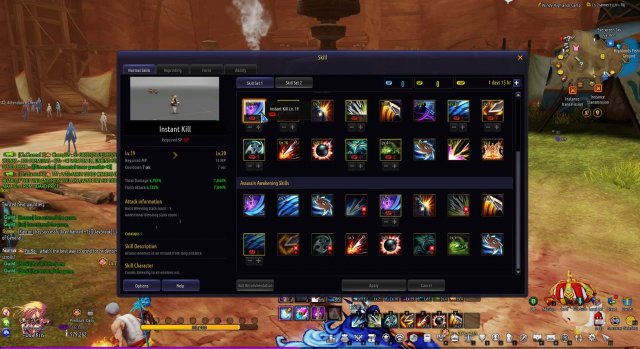 If Kill thrust is too complicated and you would like to spec out of it you can put more points into quick jab instead and also put points into four winds.

This is a lot of info to process and this is only the 2nd guide i have written so if you have any questions feel free to add/pm me at DualKris in game and i will be happy to help and if you are a sin main that take issue with anything i have said in this guide constructive criticism is welcome because i am also looking to be a better player myself. i hope this guide is helpful for people, and if its useful i can update this guide for 2nd awakening skills when it comes out.

This is newbie Rakshasa guide. Guide ContentsIntroductionSkill BreakdownSkill BuildsSkill PriorityImprintsGear Introduction Rakshasa is a very fluid, mobile class with almost too many iframes. It is capable of doing top tier […]

A mandatory skeleton for the Void Monk skill build while also providing my own preferred build. And after that I’ll clarify the reasons why I chose this approach to Void […]