Want to stomp on that butterfly dead? Come on down and read this here guide, Shenobi! Note: This could actually be cheesing the boss, so word of warning if you dont like that.

So you probably already know why you’ve clicked on this here guide, so I wont make this introduction long.
Simply put, I wanted you to know that this is (kinda?) a cheese for the boss known as Lady butterfly, found in the Hirata estate, just following the checkpoint at the audience chamber.

I have (accidentally) found a way to force lady butterfly into a stun-lock using a combat skill, in which i was able to damage posture and, most importantly, damage. How did i find this? Rage, of course, how else?

Before we get started please note that, while this is humongously helpful, you arent invincible. She can still get herself out of the stun-lock fairly easily so while you can dish out tonnes of damage to her in one sitting she still has the capabilities to kill you instantly, especially during the seccond phase.

Also, since I didnt have ANY reccording devices on during the fight, there was no footage of me doing this — so you will have to take some reference photos as my attempt to explain this as best I can.

Before we get started, we need to get to know the shift key.

We also need a certain combat skill, which is called ‘Nightjar Slash’ which is essentially… 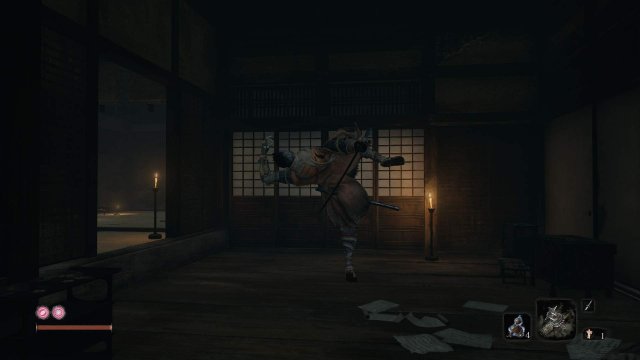 …That. I think you know how the boss is going to turn out.

If you are continuing this i’m gonna assume you beat him. Once you get the mechanical barrel go back to the sculptor and give it to him. You will then be able to use prosthetic arts. Now its time for a bunch of grinding. This shouldn’t take long however. 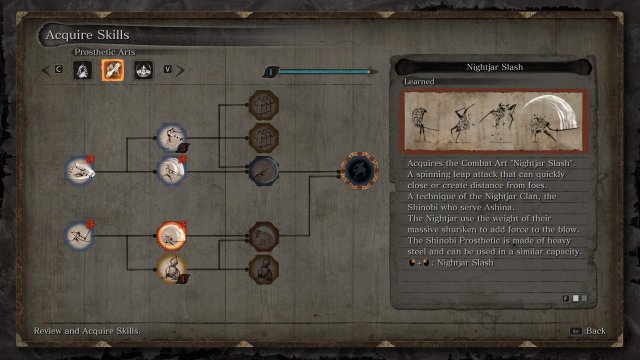 (The one that is highlighted is the thing you need)

Once you get that, you’re officially ready to face lady butterfly!

Right, so I will get into how you can get started.

As it begins, she may do a sweeping attack following throwing some shirukens towards you, this is perfect to get the spamming started. Simply hold right click (or block) and spam left click (attack) repeatedly. This not only damages her posture, but as she begins to attack you, you will hit her — stunning here and damaging her vitality.

However there are chances she can break out of this stun-lock.

If she performs a parry/perfect block (As seen in the image below) She may follow-up with an attack, which can be devastating. She can also however, jump up in the air. If she does this, take no chances, back away and wait for that dreaded danger sign. This means she is going to grapple you. Shift-dodge out of the way and then follow-up with a continuation of right and left click spam. Keep your healing items ready because you may need them, however i advise you keep their use to a minimum until the seccond phase. There, they will be most needed. 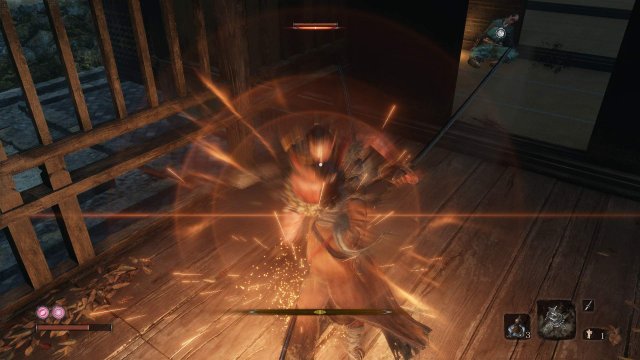 If you notice a danger sign, but she is not in the air, immedeately jump away. She is preparing a slash attack which can totally devestate your health early-game. It is pretty easy to continue stun-locking her afterwards.

After stabbing her *ahem* fatally, she will vanish. Is it over? Nope. Now the real fight begins.
Uh i dont have a picture for that so… 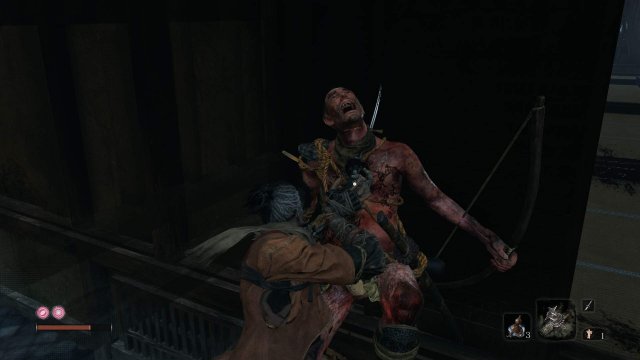 So we made it. Prepare to die mostly on this phase.

As she says something like “Impressive boy” Move up to the statue. There you can catch her off guard as she jumps down it and continue doing a stun-lock.

Soon after however, she will click her fingers. this means ignore her and run away. Illusions will begin appearing. Ignore them, run around them in a circle. Make sure they are in the middle of the arena.
Sometimes lady butterfly will join the fray, sometimes she stays up in the air throwing crap at you, either way keep running.

She will click her fingers together again, go to one of the pillers. Take cover and attempt to make the projectiles hit the pillar instead of you.

Speaking of which, as far as i know, they are unblockable. So theres that.

This is why i said to keep healing item use to a minimum. This is where you will most need them.
Continue stun-locking her. At times these projectiles will attack you. If you feel as though you are heavily damaged, shift-run away, and heal yourself and then initiate the attack again.

After a while she will click her fingers again, this time the pillars are on fire. This changes nothing, hide behind them once the illusions are gone. the slash attack and grab attack are still present in this fight so watch out.

Eventually with some good dodging and cold-hard luck, you will beat her and stab her twice for a
Shinobi Execution.

If so, congrats! You win!

Sekiro Online (Mod Adding Joly Cooperation & PvP) There’s a mod that adds online multiplayer to the game allowing you to invade other player’s worlds or host an invasion. Also […]

A guide to fixing controller issues after you’ve tried all the most commons fixes, this was my last attempt after trying everything I had read online. Fix Check your PC […]