I wanted to introduce you to the magnificient world of Pistols in my all-time favourite game: Resident Evil 4 HD Remastered. Hope you all enjoy it. Notice: that I only present you the pistols you can require during the first run on normal difficulty.

The Handgun is the starting base-weapon for Leon in Resident Evil 4 but it can be bought later for 8000 PTAS. It is the cheapest pistol to upgrade, costing about 198.000 PTAS and the exclusive upgrade multiplying the ciritical hit chance by 5. Once fully upgraded it has a firepower of 2.0, a firespeed of 0.3 seconds, a reloading speed of 0.87 seconds and capacity of 25 bullets. I can feel very fast with an average of 3 to 4 shots per ganado (“zombies” of this game) on normal difficulty. Also worth mentioning that this pistol is the most inaccurate of all the pistols. 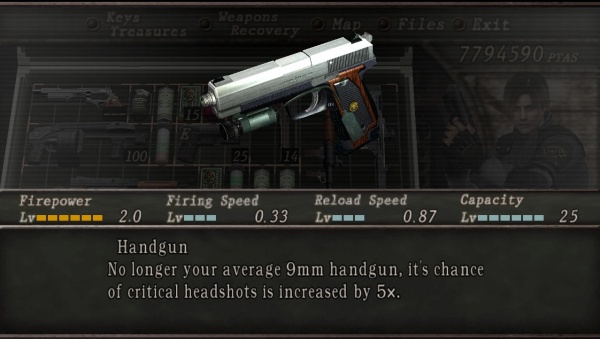 The Red 9 comes available to purchase in chapter 2-2 and the starting price is 14.000 PTAS. The total cost to upgrade this pistol 331.000 PTAS. Also there is a stock that you can buy that will cost you 4.000 PTAS. Once fully upgraded you could buy the exclusive which increases the firepower to 6.5. When its upgraded completely you have a firing speed of 0.40 seconds, a reloading speed of 1.6 seconds and a capacity of 22 bullets. The Red9 is the most powerful handgun in the game and you easily take down ganados with very few shots. 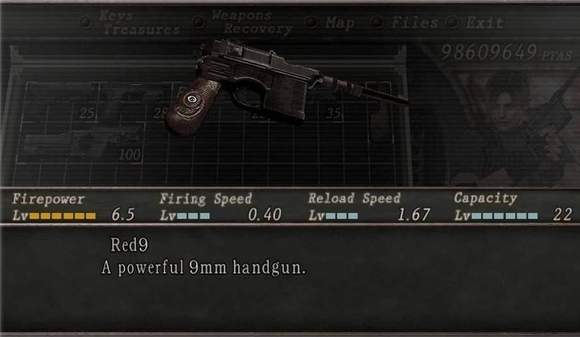 The Punisher has the ability to penetrate through 2 enemies with one shot and it can be bought from the merchant for 20.000 PTAS. But the best way to obtain this wepaon is by shooting the blue medallions and you will get it for free. Fully upgraded the Punisher has a firepower of 1.9, a firing speed of 0.33 seconds, a reloading speed of 0.83 seconds and a capacity of 28 bullets. The exclusive upgrade allows you to penetrate through five enemies with one shot. The Punisher requires 296.000 PTAS to fully upgrade but can be cheaper if all the medaillons are shot. 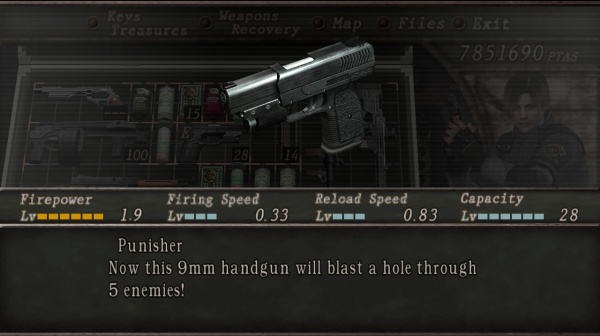 The Blacktail is available to purchase at chapter 3-1 for 24.000 PTAS. Its a real monster under all these pistols because it comes along with a very high firepower, high capacity and very steady handling. In total the upgrades will cost you 360.000 PTAS. The exclusive upgrade increases the firepower to 4.5. Fully upgraded the pistol has a firingspeed of 0.27 seconds, a reloading speed of 0.83 seconds and a capacity to 35 bullets. 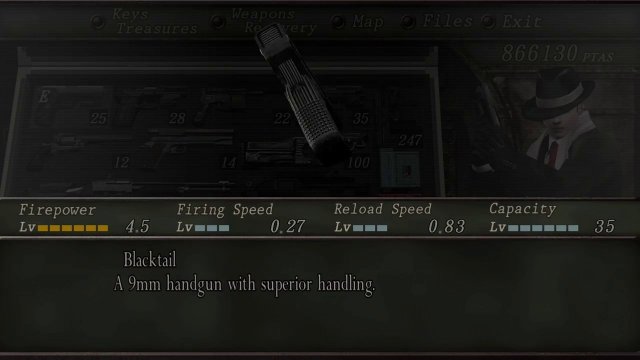