Many players think that bringing your legendary lord to lvl 40 is extremely difficult, but this guide will show you the opposite. On top of that, I will show you some strategies to quickly level up to get all that tasty skill points.

How to Quickly Max Out Your Hero

So first we’ll be going over the best strategies to max out your legendary lord both in vortex and mortal empires campain. The most of these are pretty simple so you wont have to be a pro to do this.

This is my first steam guide so I would appriciate some feedback from the readers of this guide.

Your legendary lord is the leader of the faction you choose and is your mightiest frontline fighter or mage. And of course you’d like him to be even stronger. To make him stronger you have to invest skill points in his skill tree. To aquire those points, you have to get a certain amount of xp, which increases if you have a higher level. 1 point for 1 level. And level 40 is max. So 40 points to invest. You may think that this takes ages, but luckily the game has some strategies to easily farm large amounts of xp in a short time. These will be the next points.

If you see that a rebellion is about to happen, move your lord (and his army) into the capital of the trouble province. DO NOT move your army in a minor settlement. The rebels will ALWAYS spawn in front of the capital of the province. They start with 5 units and start building up their forces. After 5 turns they will have a full stack ready to attack. But do not wait for them sieging your city even though you will probably beat them with your garrison reenforcing. Attack them straight away. But always look at the units they have first. One time, as tomb kings, there was a rebellion and they had a freaking Hierotitan. I managed to kill him before he reached my front line thanks to my archer spam, but without them, he would have shreded my infantry.

A second tipp is that you can raid in your own lands to speed up rebellion. Dont wait the 5 turns. 2 are enough. Then attack their 11 unit stack with your army. If you have a 20 unit stack, you are going to destroy them. You can even auto-resolve if the battle is mostly in your favour. This is a really nice strategy to farm xp to make your lords powerful fighters.

Lords can quickly level up while just sitting somewhere and recruiting new units. This is strategy for players who do not want to fight battles constantly. This is relevant if you are raising a new army.

A lord can easily gain 4-5 levels only by recruiting new units. 4-5 levels may not seam much, but these first levels make the difference between a fresh newbie lord and a war machine ready for slaughter (I exagerated a bit.) This method doesn’t give you loads of xp, so we’re going to move on to the next farming strategy. 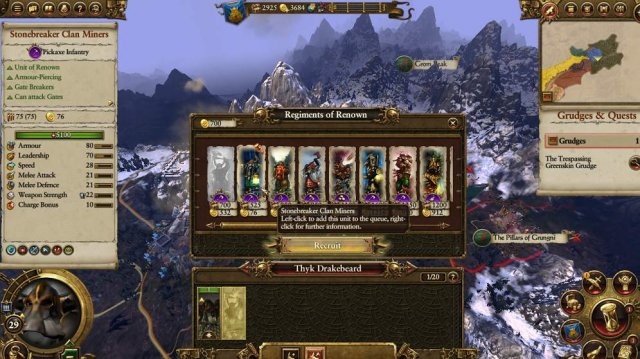 After completing a quest battle for a unique item, your legendary lord will be rewarded with a ton a xp and of course the unique item (otherwise you wont be doing this) Of course lords like Malekith have a huge advantage compared to other lords, because he has three quest battles.This is another tipp for players which plan on playing him in the next time. Some times quest battles can be really challenging but the`re really worth it. So do them ASAP. 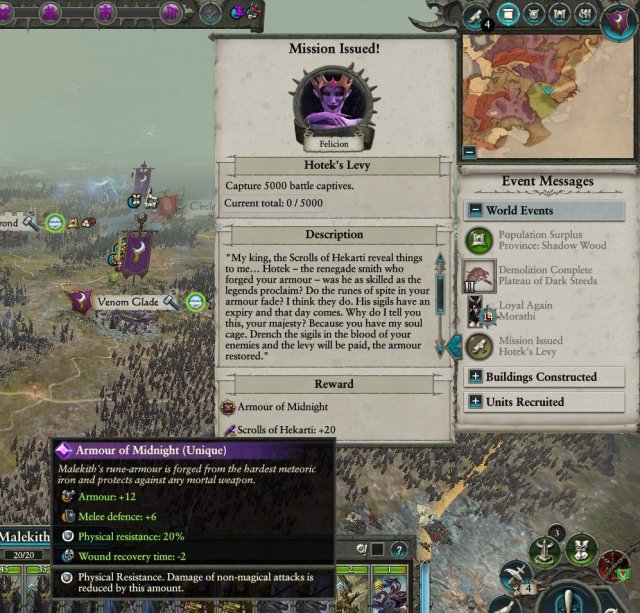 Obviously, your legendary lord is your overall strongest fighter, in melee or magic. So use him. Dont let him go moldy in your back lines because you’re afraid to lose him. Get him there where he belongs- INTO BATTLE- dying with his fellow soldiers (ok, I exagerated again) But seriously- After all this game is called total war, not total chilling at the coutry club with Malekith and Archaon the Everchosen. For example lets take Tyrion. He has several of the best sayings of the game. “BRING ME BATTLE!!” or “SUNFANG HUNGERS!!!” And he certainly correct about his skill in battle. All we can say Tyrion is a beast in melee only on place 2 behind Archaon. And then look at his brother Teclis. He is a mightiest wizard with Mazdamundi and can shatter enemy formations with only one of his spells. But all we can say is that he is SO BAD in melee. He would probably lose to a bunch of zombies. So keep him and other wizards out of melee combat. As last example lets take Mazdamundi- an obese lizard sitting on a flying throne. Same advise as with Teclis. But as he gets his fellow ancient Stegedon- Tzlaaq, he turns into an absolute beast in both melee and magic.

On top of that your lord gets a trait through the campain if he personaly interfeared in battles.

I’ll cover every single thing I can think of that will help you achieve world domination as Bretonnia. How to Play Bretonnia in Campaign When playing as Bretonnia you have […]

Total War: Warhammer II – How to Play the Greenskins

Every single thing you need to know about the Greenskins from Battle to Campaign and everything inbetween. How to Play the Greenskins in Campaign Disclaimer: This guide is based on […]

A Series of Guides covering the very basics of Total War. Each guide will focus on a single part of the game in as much detail as possible. Basics of […]