This is a guide for newcomers and veterans alike who would like to optimize their experience of playing Streets of Rage 4. From basic beat ’em up theory to advanced SOR4 specific strategies, this guide is designed to explore a lot of what the game doesn’t tell you.

Like a good brawler, SOR4 can be as deep or as shallow as you want it to be. For easier difficulties, you can get by with button mashing and not much thinking if you’d like, but for Hard, Hardest, and Mania it will require some actual strategizing and Streets Smarts to survive the raging within the streets.

In this guide we will explore several strategies that will help you achieve high scores and complete the harder difficulties, or at the least make easier modes even easier as you pummel your enemies to a pulp with flash and style. 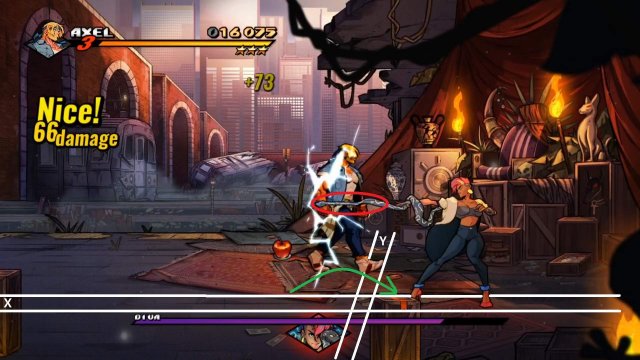 For those who are new to the 2D sidescrolling brawler genre, here is a basic rundown on how these games function. Each screen allows for Horizontal Movement as marked by the X axis, and Vertical Movement (marked by the Y axis). The goal is to move along each axis as safely as possible while defeating all enemies on the screen.

In the screenshot above, Diva is using her long range attack which you cannot counter if you were standing on the same lane as her in the X axis. What you can do is maybe go in for a jump attack, but the attack has several active frames that will damage you and prevent you from getting a proper drop on her.

Instead, you’ll want to curve around Diva from above or below her by sliding up or down the Y axis, and getting in close enough to start landing any of your standard attacks on her to initiate a stagger and combo.

So you’ve managed to punch your enemy in the face and initiate a possible combo set up. Each character has a basic 4 or 5 hit combo that can be done by simply standing still and pressing the attack button that many times. Some enemies can be defeated with these basic combo strings, but for the tougher ones, you’ll want to take advantage of the Staggering System.

For every character, the first two hits of their standard combo stagger the enemy* and you’ll want to take a moment to pause restart the combo while the enemy is staggered so that you can dish out the maximal amount of damage in the end.

You’ll typically want to take enemies out within a combo as opposed to knocking them down, only to let them get back and continue to pose a threat to you, especially enemies who have more threatening attacks than others. While it’s not always possible to take out high health enemies in one go, always do your best to damage them as much as you can so that they do not disrupt your ability to take out the weaker goons.

Air Staggers are incredibly useful for dropping in on enemies from a distance and staggering them to set up a combo. They have been a series staple since the beginning and every good Streets of Rage player utilizes this attack to bridge the gap between theirselves and enemies that are out of reach from their current position. Assuming the enemy you jump on does not have an Anti-Air Attack or luckily just doesn’t use it when you decide to drop an Air Stagger on them, this attack is not only great for combo set ups, but also jumping over an enemy’s attack so you can regain priority in the altercation.

Every character is equipped with various special attacks:

Specials are higher damaging and higher priority attacks that help finish, and sometimes extend, your combos with devastating impact. They often have better range, better damage, and more priority than your regular attacks, but they temporarily drain your health, so use them wisely.

Thankfully, a new mechanic introduced in Streets of Rage 4 is the ability to regain your health after a special attack, provided that you do not get hit and that you land enough regular attacks to regain it.

While it is tempting to spam your specials to pull off beautiful flashy combos, they are often better saved for situations where you know you can finish a huge cluster of enemies off and when you can recover your health safely, which brings us to our next topic.

The best policy, of course, is to avoid damage as much as possible, even if you do have extra lives and have health pick ups every few screens in a level. But if you do happen to take damage it is best to re-asses every situation and re-position yourself so that you can safely take on foes without the threat of having one of your lives taken away.

In Story Mode you start each level with only 1 life and whatever extra lives you gain are tied for that level only. In return you get infinite continues, along with the options to choose from a variety of assists that lower your score in exchange for more lives and Star Specials. Here you can save your progress and continue where you left off later.

In Arcade Mode you only have one continue, and while it takes a lot more points to gain extra lives, they at least carry into each progressing level. There are no assists here and once you lose all your lives, you lose all of your progress. You only get one shot to beat the entire campaign so this is where life and health management becomes even more important.

Though, I would argue that no matter what mode you play, not to mention difficulty, that you treat your first life as your one and only life. I say this at the risk of sounding philosophical or new agey, but even starting at Normal Story or Arcade mode the game gets noticeably more difficult with each progressing level to the point where mere button mashing will no longer work.

If you’re looking to survive a Mania run, it’s important to build the good habit of treating your first life as if it’s your only life so that you can mitigate the reliance on continues and slaving over points to get new lives, though collecting sweet combo points to go toward new lives wouldn’t hurt either–just for contingency sake.

Either way, conserve your health and don’t take too many huge risks with Special Attacks and crazy combos that leave you in vulnerable positions unless you are more sure than unsure of whether it will help you clear the screen of enemies and get you safely to the next screen.