In this guide, I will tell you how the original Fallout works and how to start playing it.

Its better you create your own character than playing as a preset character. So. First, you set all S.P.E.C.I.A.L. skills on one and pick the “Gifted” Trait. That puts all your S.P.E.C.I.A.L. points up by one. Always put Strenght, Charisma and Inteligence up the most. Other things are on your choice. Then its on you. If your character is going to be a melee character, go for it! If you wanna be a melee character use the Unarmed and Melee . If you wanna be a Gun character, use the Big Guns and Small Guns or Energy Weapons. The Age doesnt matter. And Gender doesnt matter too.

When i played the game for the first time, i tried to get into Vault 15 and i stumbled upon Shady Sands. There you go to the first building on the right. There you find a guy in a black jacket. Thats Ian. If you talk to him long enough, you can say if he wont travel with you. His service costs 100 CAPS but you can just say if he wont go just for the exchange of the loot and action. He agrees. And he always helps you to fight with anyone you attack. In the expections of someone in Shady Sands.
So now you got a companion to help you.

If you talk to Ian then for locations of other places, you get the location of the town Junktown. When you get there, go to the hospital, equip your pistol and kill Coughar and Flash. Ian will help you. They have shotguns and ammo, but with Ian you can kill them. Take their armor, CAPS shotgun and ammo. Dont equip it, because weapons are banned in Junktown. But self defence is approved. Then you can go to Doc Morbid’s lab and kill him and Gretch. Thats how you get a SMG pistol and a few medical supplies. You can then go buy some things from the Darkwater store if you want, but if you just do all of this, you can go out to the wasteland with better equipment.

If you have Luck on more than 6 points in your character’s S.P.E.C.I.A.L. stats, there is a big chance you find random encounters. When you walk, then the dot you see that represents you, changes to a marker. Not the lightning bolt icon but the marker on a location you marked. You can find more items, more lore and that. 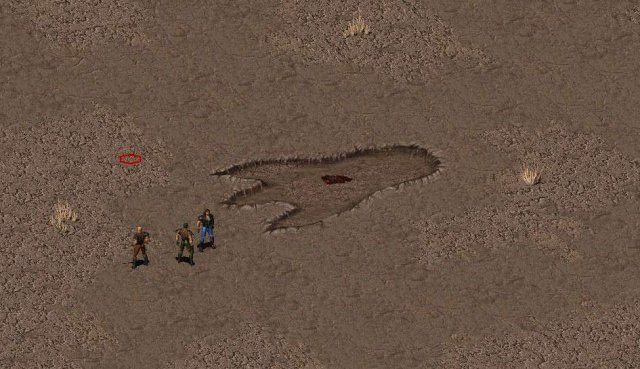