This guide takes you through the steps to complete the tasks using only 4 cities. I re-played this mission as I didn’t get the ‘build a university in San Fransisco’ achievement when I originally played it. This run through was done after I had completed all the North America scenarios. That meant I was a lot more experienced than when I first played it.

Yep – Buy out both competitors!

I hate the competitors tracks getting in my way. You can actually buy out both right from the start, even before you’ve built a single mile of track!

Note: You will need to take out a loan to achieve this. After buying out the first competitor sell everything when you merge so that money can then be used to buy the next. Again, sell everything.

Connect 4 cities. I did Sacremento, San Fransisco and then went to Los Angeles as it’s part of an optional express route task (more on that shortly). Fourth city was San Diego as it was the closest unconnected city !! All I did was run 1 passenger train between Los Angeles and San Diego. No rural farms connected to either city !!

Time to get the Express route task ticked off. Yep, before even worrying about supplying Sacramento and San Fransisco I got the express line.

It was just a single track connection between San Fransisco and Los Angeles. After all, I was only running one train and limited it to just 5 carriages each direction. No train personal used as this is still in the first month of play so none available yet. Yep, get this done early, using the only train type available. A ‘quick’ trip there and back and the express rating triggered first time.

Concentrate on building up supplies in Sacramento and San Fransisco.

Having got the express task complete I could now use that existing track to grab the corn and sugar resources on the coast. The express rating was in the bag so it didn’t matter if that route was now compromised by slower freight trains on the line. I added double track from San Fransisco to just beyond the sugar connection.

Then connect meat, veg and apples. The veg and apples can be connected with a single medium sized station. I tend to use the smallest size station on rural connections unless/until it’s used as a passthrough station.

The grain and wood comes from Hall Forest and Lee Farm located above Redding.

When a business slot opened up in Sacremento I went for the silk business so connected the cotton farm just beyond the veg/apple station. This gave me the 8th rural business for that task.

Keep An Eye On Fulfilment Levels

Just tick everything along. We need to keep Sacramento and San Fransisco growing. The game will usually throw you a couple of Promoter or Town Crier people to help the cities grow so keep an eye out for them.

Once Sacremento hits 60,000 then build a museum for the 10% fulfilment bonus.

Add the university to San Fransisco when it reaches 60,000.

A Waiting Game, Then Haul The Passengers

You have to wait for the game to open up the east side of the map so you’re just keep an eye on the 60% fulfilment level, adding more engines as needed, and just carry on collecting money needed for the very long route to Promontory Point. You can pay off the loans and take out bigger ones. I did this with still 50 weeks left on the original loans. I think I gained maybe 500,000 by doing this. Also look out for any connection bonuses. I got a further 100,000 this way.

This route cost me approx 2.3million to build after careful navigation to minimise tunnels and bridges.
Again, this was built as a single track. But you will also need 3 or 4 passing places and a couple of supply towers along the route.

By now I had the Consolidation B engine available. It was not the fastest train I had, but it had the best traction rating (119%) as the route had some big slopes to cope with through the mountains. I set them to only take passengers (not even mail). I used 5 engines and set them off about 12 days apart. Each train only picked up 1 carriage of passengers. However, the task triggered on the arrival of the 4 engine. 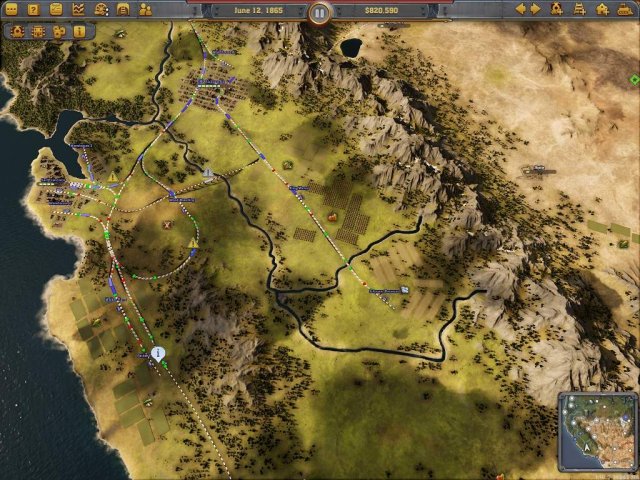