Mushroomancer is an ability that lets you consume raw Mushrooms as opposed to using them to craft items, or using items that give each mushroom’s consumed effects. It doesn’t do anything better than the regular items, but they’re so easy to find and pick up that abundance becomes the name of the game. This is a skill that lets you keep going, and going, and going, without needing to stop every couple of hunts to gather items to craft the items you need, and by proxy allowing you to stockpile on the items you’d replace to use on other items to complement your loadouts. All you need to do then is add a couple more skills, detailed inside, and you’ll have a build that puts any other supporting build (and weapon, Hunting Horn), to shame with how many buffs and heals you dish out. Satisfaction not guaranteed because I don’t know how you operate.

This guide is made in mind that the person following it has beaten the Main Story Quests of the base game of World, and are either starting Iceborne content, in the middle of it, or have reached the end of the game and can farm the monsters and resources needed.

For everything before then, just barrel through the story and any optional quests beforehand with Defender Weapons and Defender/Guardian armor. My only recommendations for you are as follows:

[Mushroomancer] Otherwise, Why Are You Here? 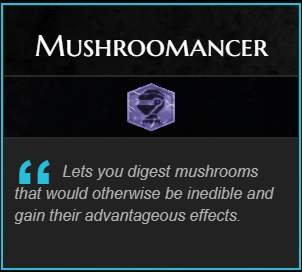 Mushroomancer, first and foremost, can be considered the most essential skill in any Mushroomancer build because without it you’d just be a regular Joe who can’t digest mushrooms because they’ll “poison me” and “draw the life out of me”. Fortunately, you’re not an average Joe because you have this skill. With this skill at Rank 3, you can eat the following Mushrooms for the following effects: 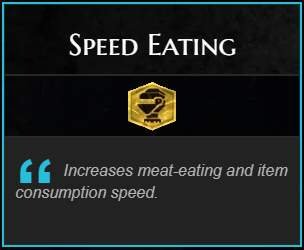 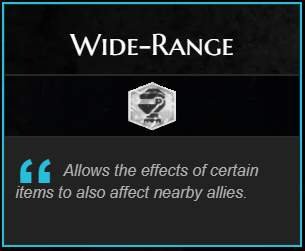 These two skills are the only ones I’d absolutely 100% say are essential to the Mushroomancer playstyle. Every other one I detail are strongly recommended on top of these, but if for some reason you just want to half-♥♥♥ it and just take what’s essential, these are what I always say to pick up. 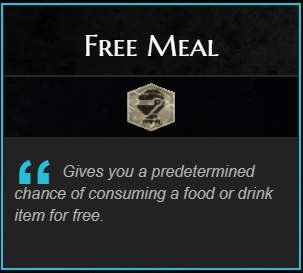 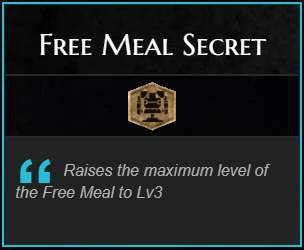 Technically, this makes two skills, but really there’s only one skill I can give my full support to as something I wouldn’t be caught without, and that’s Free Meal. 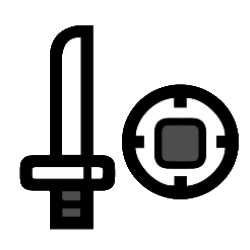 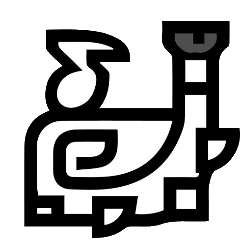 There are only two weapons I could really endorse with this kind of power, and I’m pretty sure you know their names well enough for they fit a support build like a glove.

In the next section, I detail the weapons I like to bring to hunts, but don’t think that means these are the only weapons you should bring. For Sword & Shield, I’d say collect a few with different Status Ailments/Elements and keep an eye on weaknesses for each hunt. For Hunting Horn, maybe you prefer a different set of melodies. Or maybe you want to use a whole different class of weapon because it’s what you can play well. Just pick the ones you like, and everything should shake out fine. 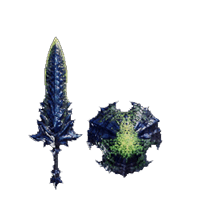 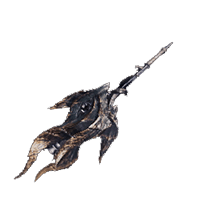 Ideally, the weapon and charms should be the most flexible parts of this build. Since that is the case, your options of weapons are pretty wide as long as you can pick up a charm to match with it. These are just my personal favorites that I’ve found in Sword & Shield and Hunting Horn, in case you just want something to look at or work toward. 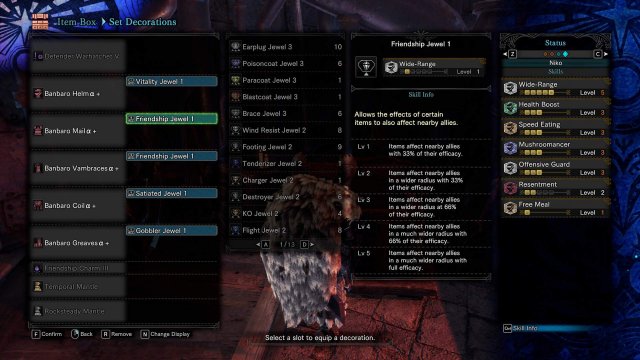 Not even three monsters in and you already have access to a fresh new set of armor that complements your choice of skills. All the main skills are here, and you have access to slightly more damage potential than the Defender/Guardian sets. Of course, choose a weapon as you see fit, I’m just using Defender Warhatchet V as a baseline. 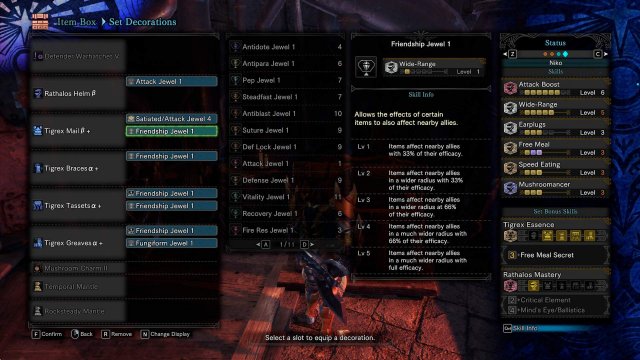 So you’ve slain your first Tigrex, and I know you’re looking at that Free Meal Secret and you want it more than anything. Well, this should sate your endless appetite for the time being until you dig a little deeper.

At this point, you’ve also taken care of Nargacuga and now should have access to the Nargacuga Special Arena Quest. With Black Belt Coins and Nargacuga Coins, you’re able to create a Black Belt Mail Alpha+ which comes with Mushroomancer 2 and Wide-Range 1. Use this if you can get it by this point, and mix and match Tigrex gear as you can get it to free up your charm slot to get some more offensive skills in, like the second build you’ll find here for this point. 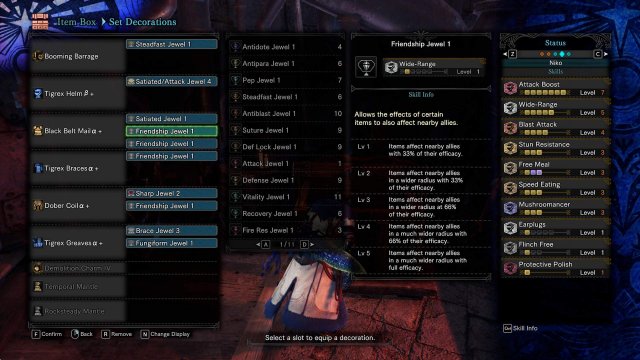 Now here’s where we enter the realm of our budding offensive strategy! With the Black Belt Mail Alpha+, we’re able to free up our charm slot and switch out our belt to give us some better skills.

From right here, you’ve basically perfected the build. You have your support and offensive skills, and you even have some room for utility to keep your modest damage on the board. You’re pretty much able to stop here if you want and have this to go through the Guiding Lands and any endgame content you see fit. But, Brute Tigrex exists, and his gear is the apex of the artform that is Free Meal Secret.

I don’t have a proper build image for this just yet, but for now I do have this for you to look at: 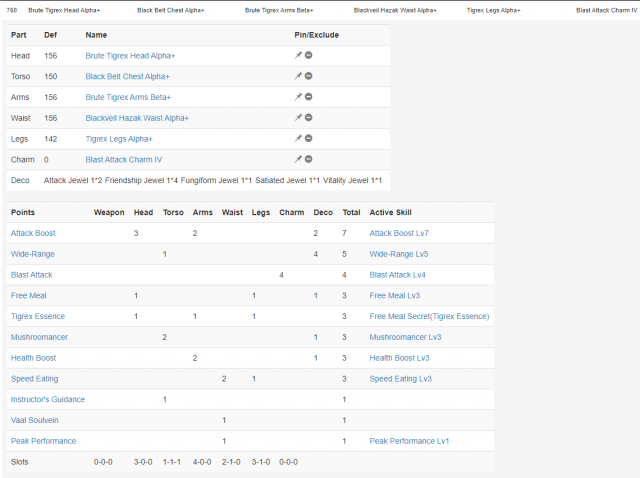 And here we are, one of many final setups that include Brute Tigrex gear. The core is pretty much the same between variations:

From here, swap between regular Tigrex Belt and Legs to finish your 3-piece set, and your belt/legs of choice with skills or deco slots that you want. It really makes no meaningful difference, but Blackveil Vaal Hazak’s belt gives Peak Performance 1, which is pretty much your best bet in terms of eking out a tiny amount of damage. Brute Tigrex Arms gives you back your precious Health Boost into the build, making its mighty return giving you a health bar larger than most folk. Survival is important so you’re not eating all the carts when you’re the one keeping everyone alive after all.

Currently not out for PC yet, but Rajang can give you Resentment 2 back instead of Peak Performance 1, for a nice little nostalgia trip back to the days of Banbaro: 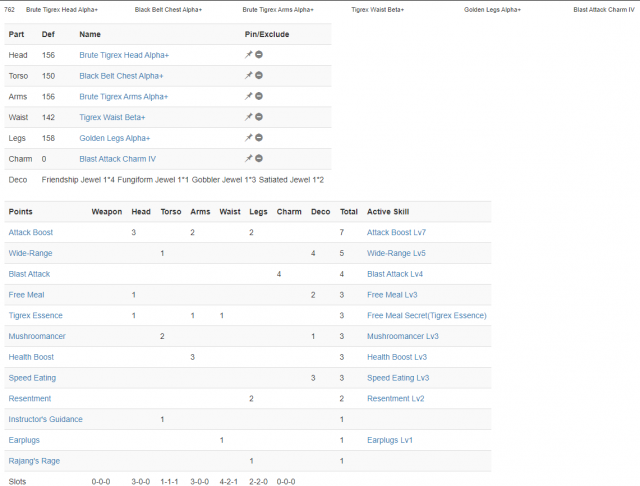 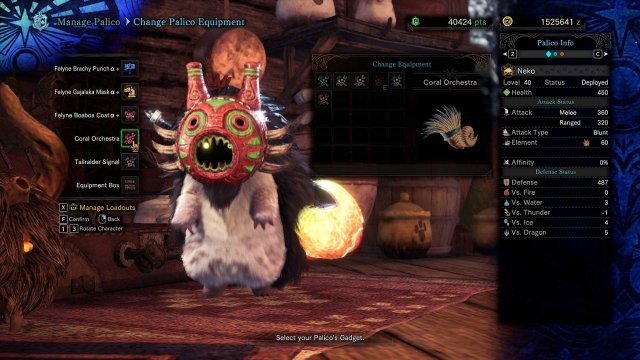 For Solo/Duo play, your Palico is a definitive boon to your hunts. This goes without saying, but if you’re one to bring your furry friends along, then this is what I can tell you:

[Item Loadout] What You Bring To The Table 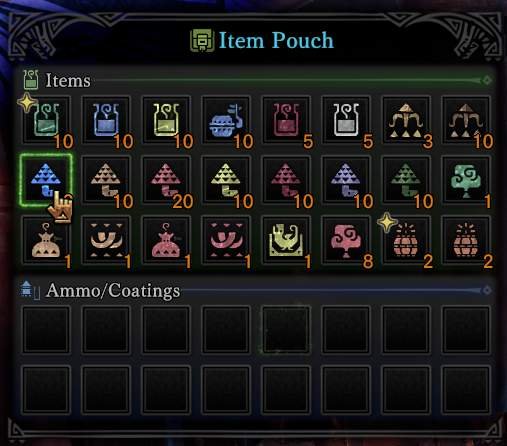 Speaking of variation, your item loadout can go through a lot of iterations before you find what you like. This is just what I like and can recommend you bring to your hunts for a general catch-all loadout.

Of course, if you like, you can bring Demon Powders, Might Seeds, and Might Pills with all the extra Might Seeds you’re saving to help your group output even more damage, but unless you’re doing 20 Minute Investigations, I don’t see a need.

If you’ve gotten this far in the game, I can assume you know how to swing around whatever weapon you see fit, so I can’t tell you what you don’t already know about that. However, if you’ve never stepped foot into support builds I can sure tell you what I know: 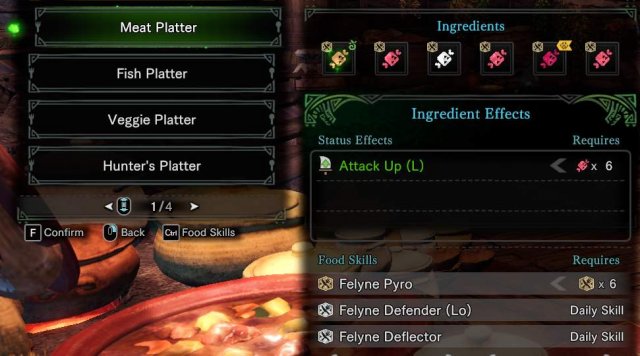 The Chef’s Choice Platter is always a well and good option if you’re lazy, but you’re carrying around 10+ Max Potions and Dash Juices, so there’s no reason you’re not already at Maximum Health and Stamina. In that case, you might as well pile on some extra damage, which means you want to get some Meat on your bones with the Meat Platter.

If you’re one to make their own custom meals, I can recommend you two or three things: As a miscellaneous benefit to opting for a Mushroomancer build, you can stop using your Botanical Research Center as a pure Honey farm, and opt instead to farm Mushrooms that you’ll definitely want to create a stockpile of. Especially early on when you don’t have as much or even any Free Meal at all. More likely than not, you’ll be munching Blue Mushrooms, Mandragoras, Devil’s Blight, and Toadstools, so keep a healthy amount of those, and remember to swap in Nitroshrooms and Parashrooms every once in a while.

Just as well, you may also find yourself running low on items that you just can’t buy from the Stockpile Vendor or get sustainably from the Steamworks, such as Mega Barrel Bombs, Shock Traps, Farcasters, etc. You can swap out Mushrooms for things like Smokenuts and Exciteshrooms, Thunderbugs, Devil’s Blight, etc. Or just go on a good old fashioned Gathering run in your preferred zone of choice.

This is less of a dedicated guide to a specific build path and playstyle and more of a documentation of any builds that I’ve played around with and found, if […]

The damage for elemental Charge Blades is set, making it easy to figure out effective elements on a monster. Elemental damage is absolutely necessary to defeat Alatreon, solo or with […]

Quit using Meal platters and chefs special platters. To be able to maximize custom builds for certain match-ups. You’ll be needing this. At least the basics. I’ve included my saved […]