The biggest differentiation (in my humble opinion) of pickups in Planetary Dustoff are the following:

Since I just started playing this game, I haven’t discovered all the items yet (or I wasn’t keeping track… sorry) – so this is a work in progress. Here are some of the useful items you’ll find along the way:

First of all, I should address the obvious question: “If these items are “bad” (and/or harmful), why should I even consider picking them up?”

Great question! It’s true – these items can absolutely ruin a potentially great run. However, they can also be a great benefit, because (if you defeat the boss) you can trade your anti-items for good items! After you defeat a boss, you’ll notice the NPC in the picture below: 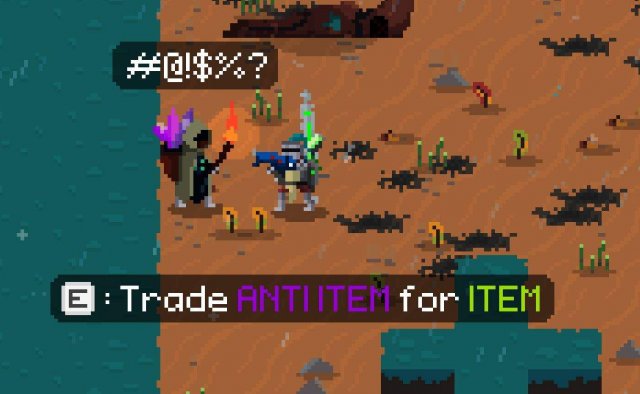 You can trade as many Anti-Items as you have (no limit) – so if you pick up 3 during your run (god help you), you can trade them to the vendor (that appears when the boss dies) for 3 random, good items.

However… some Anti-items are FAR worse than others, and depending on what you’re trying to do, may make your run a nightmare. See below for some of them:

Some items you’ll find are “Active” items (i.e. you have to activate them by hitting the “Q” key). I’ve had 4 at a time (so far), and you can just hit “tab” to cycle between them.

Here are a few: