Are you new to Crusader Kings 2 and don’t know where to start? You probably encountred the tip to start from Ireland for the begging but the game is still slow and/or confusing? Fear not for this guide will show you how to create a kingdom in one character!

Chapter 0: Before We Start

Before we start let’s clear something out that can be confusing for new players:

Cassus Beli is a reason for war. Without it you can’t fight. You can wage war against someone who has lands you or one of your courtiers have claim on and few other reasons, but for the sake of this guide we will need just Claim and De jure.

De jure means “by law”. Every duchy consists of counties, every kingdom is made of duchies and so on. If you have duchy title, but not all of it’s de jure lands belong in your realm, you can wage war against outside holders. Winning De jure war always results in realm coming to your realm (but if you are the king it’s not always for you, I will describe it later).

Claim is “legal” right for the land. Legal is in quotation marks since they can be fabricated (important!). Pressing a claim means wage a war in a name of person having the claim agains person holding the title. Winning the war not always result in land coming to your realm! If you are not claimant there are two conditions that must be met to get a land through Claim war:

For example, if ou are a duke and you press claim on a duchy for someone else, that person will be independant. But if you are king and press a claim on duchy for your vassal duke, then duke will have two duchies and you still are his liege.

That should be enough to get you starting.

For begginers, Ireland with a starting date of 1066 is a good choice for couple of reasons. Most rulers are count-tier which means they have up to 3 counties which is low. That gives you early advantage since you can easly gain more lands and be the most powerful person in the land.

For the sake of simplicity, the rest of the guide will be made as if ua Brian was chosen to play.

Step 2: Council. First thing you do is checking your council.

If any of your council members has their stats below 15 here is a quick way to change it: 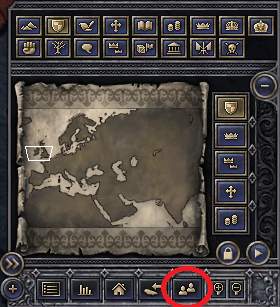 Set join court on yes and search all (remember that only men can be in council, exception is rulers wife who can be spymaster). 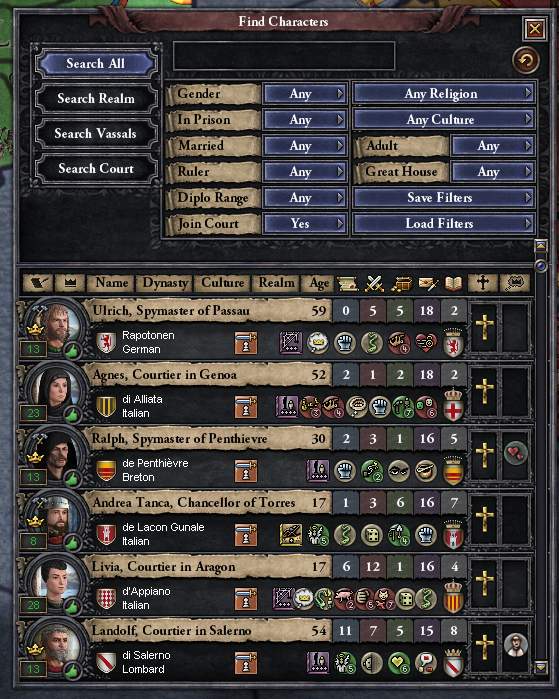 Filter them by what ability you need and invite those with best. Profit!

Having done that let’s go to the next step, which is…

Yes you read that right. You are going to cause a civil war to get the counties your vassals have. We are doing it because if you control the county, you get all the troops, if it’s your vassal, it’s 40% at best. How do you do that though? There are 2 ways: the way of tyrant and the way of intrigue.
The way of tyrant is simpler one, but crippling your opinion. Just revoke the titles one by one and crush them. Be careful though, this impose tyranny (-40 opinion, ouch).
The way of intrigue takes longer but doesn’t impose tyranny:

To succeed you need 80% plot power and at least 1 backer (that’s why your chaplain works on improving relations). If you meet the requirements, there is decision to revoke the county. By revoking them in this way vassals usualy rebel, which means you have to apply good old way of crushing them to bits. You should have more troops from your one county and vassal so it’s no worry.

When you hold all counties in your realm you can get to next chapter.

Chapter 2: Conquest and Creating the Kingdom

So you have your realm stabilized. Good. Next step after winning the civil wars is more wars.

Step 0: Press your de jure claim on any counties that are outside of your realm and proceed to do with them what you did in chapter 2. If you are over your demense limit, raise the centralization law

Step 1: Fabricate Claim.
This is the reason most people don’t play as Ireland when they learn to play. Other countries can gain lands by pressing other claims, but Irish usually have to do without it at the beginning, which is bit tedious.
If you managed to fabricate the claim, just press it and win war and proceed to next step.

Step 2: Foregin Climants.
If you didn’t or you don’t want to wait for Fabricate to work then find a county you want to conquer. Click on it’s shiled and it will take you to the realm page. There is a button named “Claimants”. If it’s grey then though luck, try elswehere. If it’s blue, then let’s get to party. Clicking the button shows you the list containing all people with claims to that realm. If beside their portrait is green thumb up, then you hit a jackpot and can invite him to court. You can now press his claim in war, BUT DON’T DO THAT YET! If he doesn’t have land in your realm, he will just become new independent ruler, so first you have to give him something (even a barony will suffice). Then press the claim and win the war. If you are short on counties to give (leave at least as much as your most powerful vassal have to yourself), then just chapter 2 someone. Repeat this step until you have 10 counties in your realm, and then…

Step 3: Long live the king!
You can create a kingdom now, but don’t be so hasty, there is one last thing to do before making kingdom! Your deflaut succesion law is Gavelkind which means all your sons get some of your lands when you die. You want to change that to ethier Tanistry or Primogeniture.

When I wrote Tanistry, I felt the fanbase howl in hatred at me, but please just listen.
Both succesion laws make it so all your ladns go to your heir after your death. Difference is that in Primogeniture your heir is always your eldest child (usually son) and in Tanistry your heir is Tanist.
Tanist is chosen by you and your vassals from your dynasty (they tend to favor the elders). So you ask why the hell would I want that. Answer is simple: usually you don’t, but there are two exceptions:

For the rest of the land, ethier conquer them with de jure claim or offer them vassalization. Many accept if you haven’t waged war on them.

When you become the king, you should already have a knack on this game, so ethier go play someone else, or become emperor of Britannia.

To become emperor, just do what you did earlier on dukes instead of counts. Best order of conquering the British isles is Wales, Scotland and England. Wales are just a bunch of dukes, like Ireland was before you happend, but it has less land than Ireland, so it’s not a best start. Scotland is already a kingdom, and it can kick your ♥♥♥ quick if you don’t watch it, but getting it piece by piece is quite easy. England is trickier due to it’s size, but doable if you have Wales or Scotland under your thumb.