This guide describes what hats are available in the game, what they do, when they can be gotten and various tips and tricks regarding their use.

When starting the game, the player is only in possession of the Kid’s Hat, and all other hats must be unlocked by stitching them. In order to stitch a hat, the player must have the required amount of yarn for the hat in question, and they must have found at least one yarn belonging to that specific hat. Different types of yarn can be found across all areas of the game, and each one that is picked up adds one yarn to the reserve used for stitching. Any combination of different yarns can be used to make any hat, and there are far more yarns available than are needed to make every hat, meaning that the player never needs to worry about permanently making hats unobtainable.

This is a list of terminology that will be used in this guide, for the sake of avoiding confusion.

“Activation button”: This refers to the button the player must press to activate a hat’s effect. By default, this is LT on an Xbox controller, L2 on a Playstation controller and left Shift on a keyboard. For some hats, simply hitting the button toggles the effect on or off, while others require the button to be held down for as long as the player wants to use it.

“Bonk”: A bonk is when you dive into a wall or object and ‘bonk’ your head into it. This will knock Hat Kid backwards and prevent any action from being taken until she has hit the ground. Bonks are a surefire way of losing climbing progress, taking fall damage or plummeting into environmental hazards, and should thus be avoided at all times.

“Recovery”: A recovery is performed by jumping after a dive. This cancels the dive, and functions as a tiny hop, preventing both fall damage and bonks. As a side note, if a recovery is performed just as Hat Kid hits the ground, she will be launched forward, allowing her to quickly traverse long distances through continously diving and recovering.

The Kid’s Hat is the purple tophat worn by Hat Kid from the start of the game. Its function is simple, acting as a way for the player to be pointed in the right direction if they’re not sure about where to go. 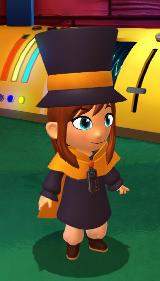 When activated, the camera will turn towards the current Act’s Time Piece, assuming it has been revealed. A crosshair will also encircle the exact location of it, but this only shows the straight path to the target, ignoring potential walls and other obstacles that makes it impossible to take said route. The activation button must be held down to use this effect, but it has no cooldown or duration, meaning it can be used as often and for as long as the player wants. If there is no Time Piece nearby, the hat will float above Hat Kid’s head and a message will briefly appear, informing the player of the absence of Time Pieces.

Due to the nature of the hat, no badges affect it in any way. Additionally, it is not required for anything in the game, meaning there’s little reason to have it on outside of looks or if the player gets lost.

Example of the Kid’s Hat in use. Currently pointing towards the Mafia Town telescope. 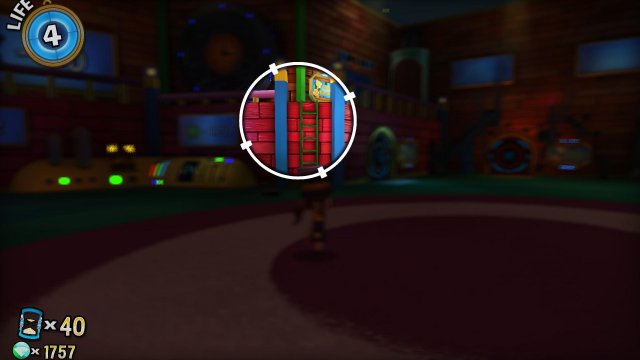 The Sprint Hat is the first unlockable hat in the game and requires two yarns to stitch. It can be obtained from the start of the game, as Sprint Yarns are readily available in Mafia Town. As the name suggests, it allows Hat Kid to sprint. 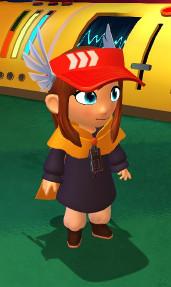 Along with drastically increasing movement speed, sprinting also changes the normal jump to a longer one, at the cost of losing all air control and the double jump. However, one can still dive and recover to prevent fall damage, although this still doesn’t allow for much air control. Additionally, sprinting increases Hat Kid’s turn radius, meaning sharp corners can become harder to deal with.

The Sprint Hat is unique in that it is the only hat in the game that has a badge that affects it alone. The badge in question is the Scooter Badge, which completely changes how the Sprint Hat behaves. The scooter is toggled, rather than held, and moves faster while allowing for better ground control, as well as double jumping. However, it is not possible to dive from a jump with the scooter, meaning it covers a much shorter distance per jump than the normal sprint. This means that both variants have different uses, and neither should be considered a straight upgrade to the other.

The Sprint Hat has no special interactions with any badges aside from the Scooter Badge. However, the Hookshot can be paired with the Sprint Hat to quickly traverse levels without risk of fall damage. The No Bonk Badge is also useful when sprinting, as diving into a wall climb will compensate for the lost double jump and prevent accidental bonks due to poor air control.

The hat’s shortcomings can be compensated for by simply ending the effect briefly to perform tricky jumps or make sharp turns before reactivating it again. This applies to both the sprint and the scooter.

As an added bonus, pressing the crouch/dive button (RT on Xbox, R2 on Playstation and left Ctrl on keyboard) while the scooter is active will make Hat Kid honk the horn. This has no actual impact on gameplay, and is purely aesthetic. 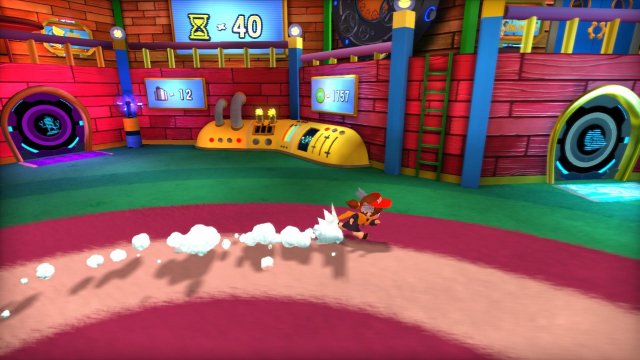 The scooter that appears when the Scooter Badge is equipped. 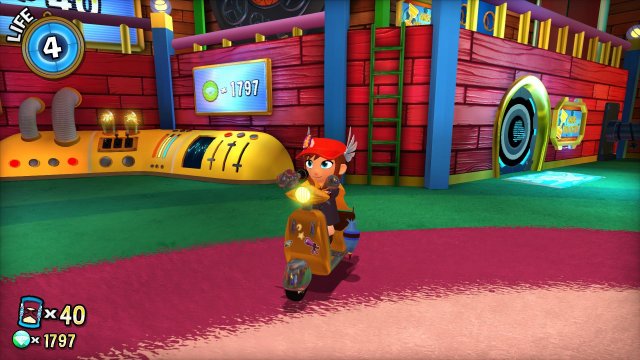 The Brewing Hat is the second unlockable hat, requiring four yarns to stitch. It is the second hat that can be acquired in Mafia Town. It allows Hat Kid to brew explosive potions that can be thrown to break certain objects and damage enemies. After throwing, a cooldown of one second must pass before a new potion can be prepared. This cooldown is reduced to 0.5 seconds with the Fast Hatter Badge. 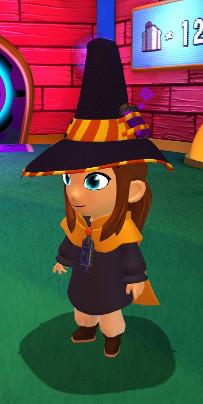 When activated, Hat Kid shakes a bottle, charging up the explosive as the button is held down. After one second, the bottle is ready to be thrown, which is done by releasing the activation button. The resulting explosion causes minor damage to enemies, but more importantly break glowing objects, releasing collectibles. These items are most often pons and health, making rigorous use of the hat a good way of speeding up the acquisition of badges. The potion can be cancelled without being thrown by releasing the button before the potion is ready, or by diving. Double jumping can still be done without cancelling the charge. The explosion does not harm Hat Kid in any way.

Although the Brewing Hat can be used in conjunction with the Fast Hatter badge, it isn’t too helpful due to the inherently low cooldown of the hat.

The resulting explosion from throwing a potion. 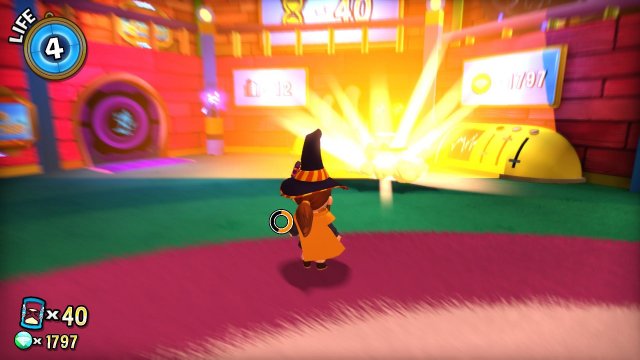 Objects with a golden glow must be broken with the Brewing Hat’s explosives. 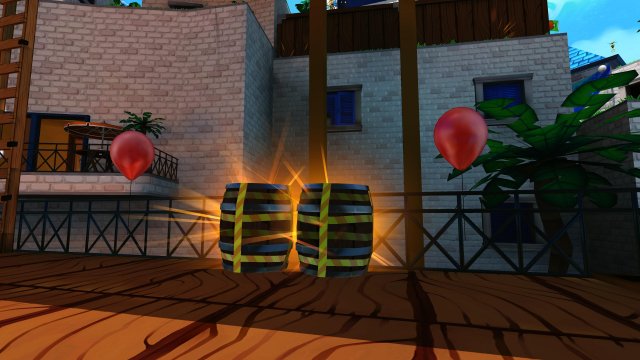 The Ice Hat is the third unlockable hat in the game. It requires eight yarns to stitch and the first yarn can be found in Act 1 of Battle of the Birds. It allows Hat Kid to turn into an ice sculpture. 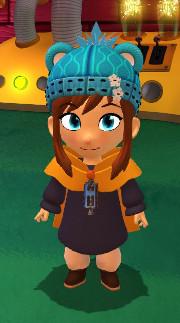 Turning into an ice sculpture makes Hat Kid heavy, allowing her to sink in water as well as interact with the blue springboards found throughout most levels. Activating the Ice Hat on top of a springboard will launch Hat Kid to a predetermined location, which often has a springboard that returns them to the original location. It also increases fall speed while preventing fall damage, meaning it can be used to quickly descend from high altitudes with little to no risk. It also has a short cooldown, but unlike the other hats with cooldowns, the Ice Hat functions indefinitely, meaning Hat Kid remains an ice sculpture until the activation button is released.

The Ice Hat is affected by the Fast Hatter Badge, allowing rapid, subsequent transformations. However, this is ultimately not that helpful, as puzzles with the Ice Hat never require precise timing or rapid deployment. However, the significant cooldown reduction can be useful to reduce time loss due to mistakes, such as if the player misses a springboard due to being misaligned. One of the many springboards the Ice Hat is used for. The Dweller Mask is the fourth unlockable hat. It requires twelve yarns to stitch and the earliest yarn can be found in Subcon Forest. It creates a temporary field around the player that fade dark purple and green objects in and out of existence. 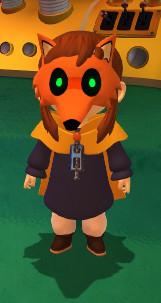 When activated, the Dweller Mask projects a bubble around Hat Kid that solidifies special green objects. It also makes it possible to travel through the more uncommon dark purple blocks. This effect automatically cancels after about three seconds, but can be cancelled prematurely by pressing the activation button again. After being cancelled, it is put on a cooldown of about 1.5 seconds. This is reduced to 0.5 seconds with the Fast Hatter Badge.

It is possible to keep the mask perpetually active by jumping just as the effect is cancelled and staying in the air until it is recharged. This technique is made significantly easier to perform by using the Fast Hatter Badge, but is still possible without it.

The Fast Hatter Badge is extremely useful with this mask, as it saves a lot of time if one fails at completing a puzzle in time while also making the aforementioned technique to keep the mask active at all times easier to perform.

The Dweller Mask in effect. The white line shows where the bubble collides with world objects. 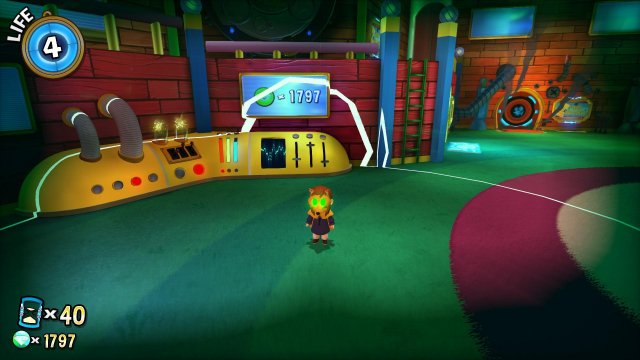 Comparision of a green object before and after activation. 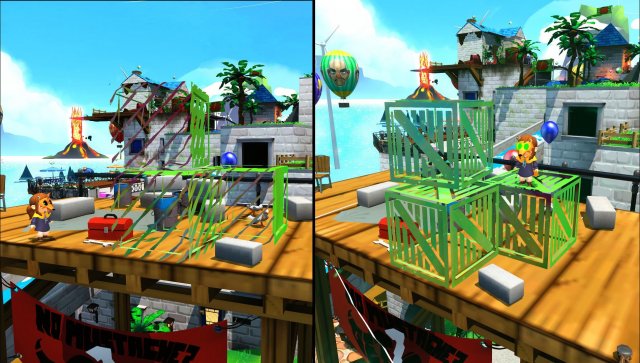 Comparision of a purple object before and after activation. 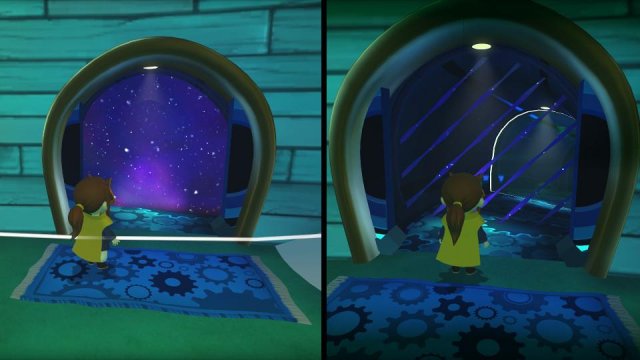 The Time Stop Hat is the fifth and final unlockable hat. It requires 24 yarns to stitch and yarns can only be obtained in the Alpine Skyline. It significantly slows down time when activated. 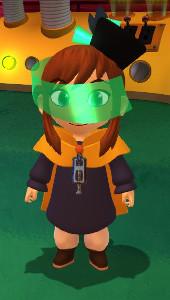 When activated, the Time Stop Hat slows down the world around Hat Kid by 75% while leaving her at her normal speed. This effect lasts for four second, meaning every activation lasts one second in the game world. After being deactivated, it has a five second cooldown. This is reduced to two seconds with the Fast Hatter Badge.

Despite the simplicity of the effect, the Time Hat is still extremely useful in specific scenarios. Most notably, it will make speed-based acts like Train Rush and Cheating the Race laughably easy, as well as make timing puzzles easier, assuming they don’t require another hat to be performed. It also makes bosses easier to deal with, as one will have more time to react to their attacks. However, the hat is only actually required for a few puzzles in the Alpine Skyline.

Due to its long cooldown and the usefulness of consequtive activations, the Fast Hatter is quite potent with this hat. However, a single activation is enough to solve any of the Alpine Skyline puzzles that the Time Stop Hat is required for. 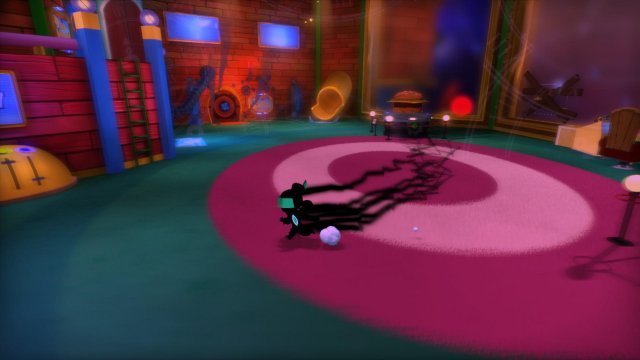 A Hat in Time – Pon Farming

A Hat in Time – Personally I Prefer the Air Achievement