This is full tutorial for Grimm Troupe DLC for Hollow Knight which will cover new bosses, achievements, endings and charms in this DLC.

To start we need to go to Howling Cliffs. You need to destroy breakable wall placed on the right, next to the bug corpse with wanderer journal. You’ll see empty room, you need to walk all the way trough and then there is secret room with big corpse of the bug, use dream nail on it. Then go back to the first room, and you’ll notice changes. There’s firepit in the middle. Hit it couple of times and red flames shall light up. You have activated the DLC. 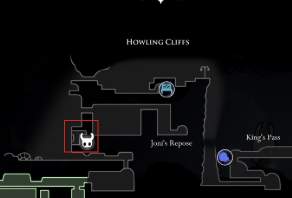 The Ritual and Its Endings

Now there are 2 tents in Dirtmouth. One belonging to Grimm and other (smaller one) to Devine (more on her in Charms section)

In which location showed on the map there’s an enemy, Grimm’s minion, which you have to defeat in order to acquire flame. Collect 3 and then head back to Grimm’s tent. He’ll take Grimmchild from you and upgrade it. Then he’ll order you to seek more flames, with more powerful foes protecting them. Repeat the process and go back to Grimm. He’ll take away Grimmchild yet again and then boss fight will start. After defeating him, Grimmchild will come back upgraded again and you’ll get achievement “Grand Performance”. Grimm will order you to seek three last flames again, and now there are two possible choices, endings for the player, one ending per save!

Grimmkins – enemies protecting the flames: (depending on your nail level their hp is different)

Banishment – you can end the ritual instead of continuing it. Go the Distant Village in Deepnest and enter the smaller cocoon: 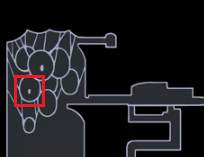 Brumm is waiting for you there (the NPC who earlier played music in Grimm’s tent, you can notice his absence after first fight with Grimm). He’ll give you one flame and tell you that you can either continue or end the ritual. After this dialogue, he’ll go to Howling Cliffs, to the place where Ritual started, with his help you can banish Grimm Troupe from Hallownest. You’ll lose Grimmchild charm then and tents in Dirtmouth will dissappear, but Brumm is going to stay in Dirtmouth with new name – Nymm – talk with him to get new charm – Carefree Melody, doing so and then sitting on the bench will grant you the “Banishment” achievement.

Ritual – we can continue the ritual and search for last 3 flames (or collect two, if you took one from Brumm in Distant Village) and then go back to Grimm. You will see that now there is another part of a tent available – another long corridor and at the end of it, Grimm sleeping like a bat. Use Dream Nail on him (with Grimm Child charm equiped) and you’ll fight Nightmare King Grimm, harder version of previous boss fight. Defeating him will end the ritual and give you upgraded Grimmchild charm as well as “Ritual” achievement. Grimm’s tent will be gone but Devine’s won’t.

Grimmchild – given to Knight by Grimm, summons small creature looking like Grimm which will attack enemies. It has 4 phases. Each has different damage, and design.

Carefree Melody – given to Knight by Nymm, prevents damage, block change increases with each hit taken. Overall it negates damage on 22.4% of hits taken.

Weaversong – can be found in Deepnest, summons three small weaverlings which attack enemies (3 damage per hit) and collect soul. 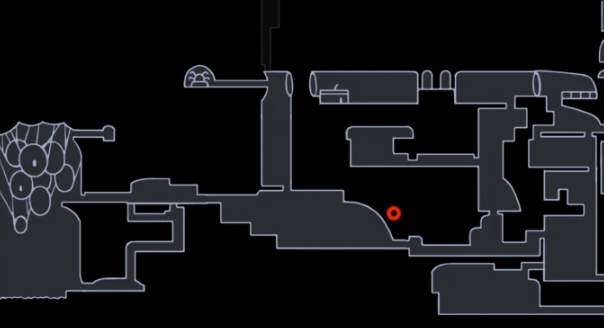 Sprintmaster – increases running speed by ~20%, can be bought from Sly in Dirtmouth after giving him Shopkeeper’s key.

Dreamshield – adds shield that slowly rotates around Knight and protects it, in contact with the enemy it deals 1x nail damage and has to break and reform after few seconds. 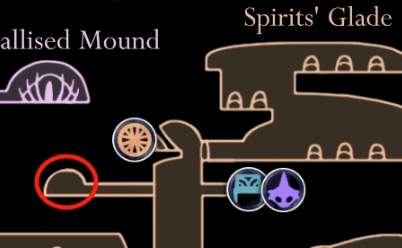 Thanks to new NPC – Devine we can now upgrade fragile charms to unbreakable ones, which means they won’t break upon death. Fragile charms can be bought from Leg Eater in Fungal Wastes and then be upgraded in Devine tent. We need to equip them and then go to her.

Nightmare King Grimm is very hard boss, some may say he is one of the hardest, but here are some tactics and useful tips based on my personal experience.

Nightmare King Grimm has 1500 HP and deals two masks of damage per hit.

Dodging his attacks and counterattacking

When Grimm attacks with bats, you can ignore first one, jump over second one, then dash and use Monarch Wings to dodge last one. You can also jump over first one and try to dash through next ones and jump over last one. Try both options. If you successfully dodged them try to attack him with nail or Shade Soul.

Grimm also attacks with pillars of fire, very useful choice is to slowly move and let them spawn close to each other instead of running and letting them cover all area, you should use this chance to slowly approach Grimm and when last pillar strikes, try to attack Grimm using nail or Abyss Shriek.

Grimm dash attack leaves fire behind so you need to be careful, wise choice is to dash in the opposite direction and when he dashes again, double jump and dash over him, you shouldn’t try to attack him during this time. There is second dash attack, but after first dash he jumps and spawns 5 fireballs, you should dodge his dash by jumping or dashing in the opposite direction, after he spawns fireballs you should dash to the opposite direction of your first dash or stand still and closely watch where fireballs are gonna hit. He also has a phase when he takes form of the pufferfish it means he had aleady lost 25% of his HP, in this form he spawns small fireballs, just stay calm and dodge them.

Grimm can disperse into the swarm of bats for 2 seconds. You should use this chance for healing or try to attack him, but I think healing might be a better option.

You should definitely use Shaman Stone and Spell Twister for increased and less expensive soul attacks. You should also consider using Flukenest, because you can sometimes miss your shot, and if you use it, then flukes will lie on the ground for a while so there is a chance Grimm will spawn there and take damage. If you want to go for more defensive combination then try using Quick Focus and Deep Focus or Unbreakable Health. You can also add Grubsong to each of those combinations to get soul after getting hit.

Even if he already at 25% of his HP, don’t get cocky and don’t rush, stay calm and focused. That’s it for this tutorial, if you want I can make one for Godmaster DLC. Hope it’ll help someone.

Basic tips and tricks for the Speedrun 1, Speedrun 2, and Speed Completion achievements! Note: this is not a walkthrough or a route, just ideas that you can apply to […]

Hollow Knight – How to Defeat the Grimm

Hollow Knight – How to Defeat the Pure Vessel