My thoughts on how to modify a scout cutter for any type of peaceful mission and how to crew her.

This is what you start out with. 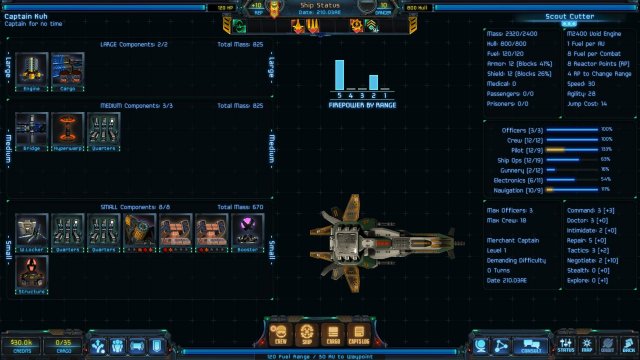 This is where we’re going. 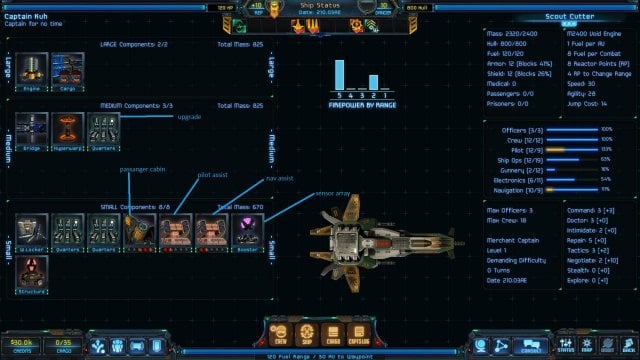 You may notice that 3 of my 5 upgrades are defensive electronics suites. I use this same arrangement regardless of the type of mission I’m doing. If I won’t need a passanger cabin, I’ll swap it out for a prison cell or a cabin for EVA suits. But this ship’s first priority should be to not get hit. A triple scanner doesn’t do that.

It would be an excellent idea to prioritize developing contacts who will sell you weapons and armor. Buy enough to equip your combat team and a few extras. Then take off your weapons locker. Now, you can spy with EVA suits and a triple scanner! But if you want to live, you’ll put on Armored Bulkheads.

If you don’t know about firing your original officers and promoting talented crewmen, please read the officers section of my guide “The Philosophy of Trading.” There are five essential skills you need your officers to cover:

Tactics is much less important than the others because navigators contribute to it and can take automatic skill check passes, so with a five officer crew I only worry about the first four. But with only three officers, things get tricky.

Crewmen are sometimes multi-skilled. I’ve definitely seen some with 6’s in two skills. You could reload the game a few times looking for a starting crew with two characters who have high skill bonuses in all four of the skills between them (i.e. a doctor/engineer with doctor and repair and a pirate/military officer [or a commander if you’re a military officer, but someone should get Stiff Salute] with intimidate and command), but thinking you’re going to find two people with those four skills is asking a whole lot of the universe.

Consider making your character part of the ship. I call the template The Scout Cutter. 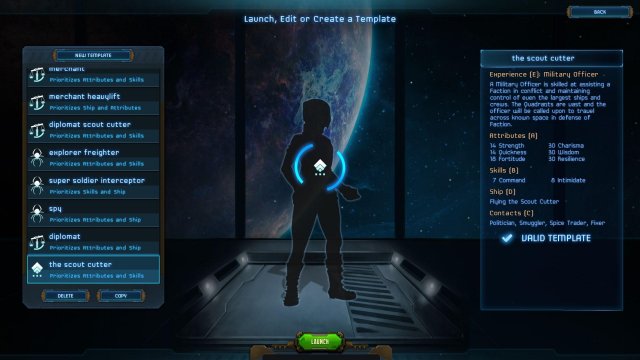 He starts with a level of military officer, but that’s just for Stiff Salute (and the starting traits are much better). Put most of his levels into pirate. (At least 8. We’re going for Menacing Demeanor, so he can do missions and not get his reputation hit so hard.) Then get smuggler.

Then you just need to find a doctor and an engineer for your officers. Ordinarily, my doctor and engineer get one level of another class (combat medic and mechanic) just to get another automatic skill success. But this time give the engineer a level of commander to get Discerning Glance and Aura of Command and give your doctor a level of quartermaster to get Contract Bargain and Perceptive Boss.

Obviously, this build limits your options for missions, but you could do escorts and small cargo drops. You’ll need to get specialists for your crew. I suggest a spy and a diplomat.

With the template I created, you’ll start out with a little extra cash. I recommend upgrading the barracks immediately and hiring a navigator, a pilot, and an e-tech or even two. That will leave open three (or two) slots for a spy, a diplomat, and a smuggler. When you can recruit an explorer, you might want to fire one of your crew dogs. A merchant would be a really good pick too.

Keep an eye on those ship skill bars on the status screen. When one department gets over 200%, you should fire someone with those skills unless you want their talents. They aren’t contributing to the ship with their skills. 100% is adequately staffed. 200% is fully staffed. Keep in my mind that when you upgrade this equipment, it will cost more skill points to manage. So plan for the future.

I always fire my pistoleer and get another swordsman. One of them will get fired as soon as a combat medic becomes available. You might consider replacing your soldiers with two exo-scouts, and your swordsman with a zealot. Go crazy and make one a military officer. Then they would have skills and could pick talents that would benefit the ship, but they wouldn’t be a very good fighting team. The expression “lambs to the slaughter” comes to mind. Two soldiers with a combat medic and a swordsman. Then you can handle crew combat.

The Spy class is a challenging one and this guide should help you become better at it. Guide ContentsThings to Consider Before You BeginCreating Your CaptainAssembling Your CrewAssembling Your ShipChoosing […]