Some tips for fighting tanks whether it be as infantry or as another tanker.

Since the introduction of components to tanks that could be individually damaged, I’ve noticed a lack of proper aiming whether it be from an AT rocket Rambo or a tanker. Simply hitting a target is not enough as the components in the enemy tank must be destroyed in order to effectively dispatch the tank. Here, I’ll give some pointers on where to aim when you’ve set up an ambush or are being ambushed.

Let’s suppose that you’ve managed to pick a good spot from which to ambush enemy tanks. Generally speaking, setting ambushes shouldn’t be done with light tanks as they are better suited for close quarters tank combat.

Now assuming that you’re engaging within about 100-200 meters with a relatively large caliber cannon (50 mm or larger), the first thing to do is to identify the type of tank that you are engaging with. As a rule of thumb, if you are engaging with fast moving tanks (i.e. almost all light tanks and all American tank destroyers) you want to take out their mobility. This can be done by aiming at the tracks of the enemy tank (assuming that the enemy tanks have their sides turned towards you). I would recommend switching to HE rounds to do this as they are more effective at destroying exterior components such as tracks than regular AP or APCR. This should not take more than 1-2 shots. Optionally, if the enemy tank is heading away from you, you may choose to take a shot at their engine with AP or APCR rounds. If they are heading straight towards you, you have two choices to make. You can either try and take out their track (it’ll be much harder since the amount of track visible to you is just a narrow strip) or, if you have the ability to penetrate a lot of armor, take a shot through their front armor and try to hit either their engine or transmission.

Now that the enemy tank is slowed, you may try to take out their turret ring to prevent them from acquiring you in their sights. After that, you can really just hammer them with shots so long as you aim at the chassis, not the turret, because the turret is one of the better armored components of the tank.

If you are engaging with medium tanks or heavier tanks, it’s imperative that you take out their turret ring so that you can buy yourself more time to land shots on them. From there, try to take out the major components like the engine/fuel tank/ammo/transmission.

Also as a little tip, if you’re engaging at long ranges, you can hit space bar while aiming down the sights to adjust your range to more effectively (lazily) engage your enemies.

If you are the victim of an ambush, it’s imperative that you take steps to ensure your survival. Assuming that you’ve been ambushed by a tank that is of a lower tier than your own, simply returning fire is the best course of action. However, if you are ambushed by a similarly tiered or higher tiered tank than your own, then it doesn’t take a genius to figure out that you’ll be taken out before you can take out the enemy tank. As such, you need to knock out their offensive capabilities. The best option is to disable their cannon breech/barrel, however this usually means that you’ll be forced to try and penetrate the mantle which is one of the most armored parts on a tank. By destroying the barrel, you cause the enemy’s shots to be wildly inaccurate while destroying the breech causes the enemy to take longer to reload their cannon. Assuming that this endeavor is successful, you have two options to make.

I would recommend option 1 for most circumstances as you’ll probably have taken lots of damage from the enemy. However, if you haven’t been too badly damaged (or if you have balls of stalinium) you can continue to engage the enemy tank. I recall one time where I ambushed a T-34/85 with a Tiger I. The T-34 was able to destroy my breech and barrel while my shots kept falling short. As such, the T-34 managed to take me out. So option 2 is certainly viable in some circumstances.

Before discussing strategy, we need to talk about the AT equipment that infantry can have access to. First off, mines. Don’t even bother with them. Just get the first tier of handheld AT weapons. Panzerwurfmine for Germans, No. 74 for Americans, and RPG-43 for Soviets. Generally speaking, you want to aim these grenades at the sides/back of the tank. However, if there are any flat surfaces on the top of the tank that you can hit, aim for those as they tend to be the least armored (Look at the diagram for more clarity). 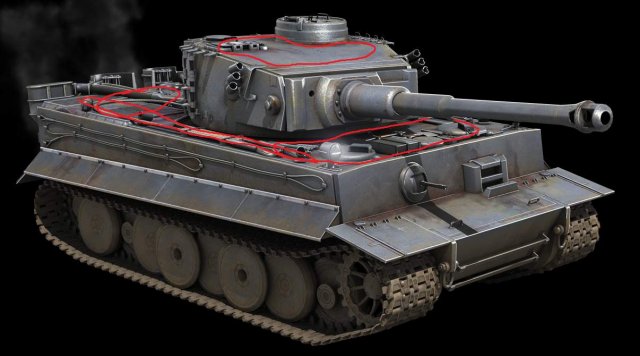 Moving on to the projectile AT weapons like the bazooka or the Panzershreck, you’ll want to follow the same strategy as if you’re engaging the enemy with your own tank. So just reread what’s in the Offensive (Tank V. Tank) section and follow that.

Side Note: From personal experience, I’ve found that American light tanks and tank destroyers are rather resilient to AT rockets to their tracks. I’m not sure if this is a legit game play mechanism or just me being a bad shot, but you’ve been warned.

When to Retreat (Tank V. Tank)

If you find yourself in any of these situations then you should immediately retreat.

A guide meant to help new players understand how the fps and rts sides of the game interact with each other and how to successfully play battles. 1) Basics In […]