Learn which skills you should acquire to become a great Rainbow Six Siege player!

This guide aims to highlight essential skills and their components that you will need to develop to step up your game in R6 Siege. If you are looking for a guide that will help you become better instantaneously, then you will be disappointed with our content. There are no shortcuts to learning a skill. It is a process and every process takes time and effort. The only way to improve your skills is to practice them.

Though, you got to know what you want to develop to develop it well, and here’s where this article comes in.

Map knowledge is probably the most crucial aspect to success in R6 Siege. This game puts the significance of map knowledge to a whole new level. Why? That’s because destructibility of the map and breaching possibilities are advanced in Rainbow Six Siege. Map knowledge is the biggest challenge new players encounter when getting into this game. Rainbow Six Siege has been out for years and many previous DLC seasons brought new maps to the pool or reworked old ones. Such additions only broaden the gap between new players who try to jump into game and old-timers who know every corner of maps.

Understand: It is natural to feel lost in the Rainbow Six Siege, especially as a new player. The process of learning maps will take a long time. 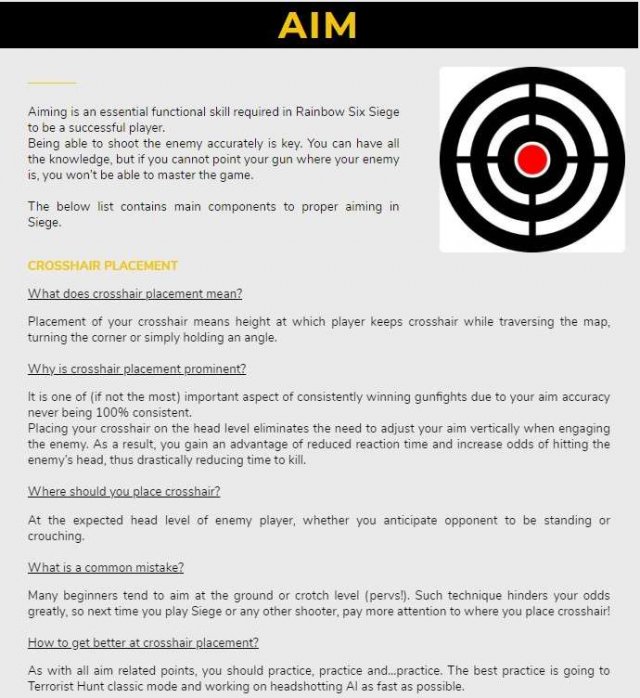 Being good at aiming is an essential skill required in R6 Siege. The ability to shoot the enemy accurately is key. You can have all the knowledge, but if you cannot point your gun where your enemy is, you won’t be able to master the game.

The below list contains main components to proper aiming in Rainbow Six Siege:

Similarly to sports, you may be good mechanically in computer games, but lack understanding of the reasoning – why things happen the way they do. In Rainbow Six Siege game sense occurs when the ability to comprehend visual and audio information meets an understanding of tactics, mechanics, and dynamics.

Once you understand the above aspects, you start having moments when it all clicks.

The method of movement thanks to which you attempt getting a quick glance of a corner or an angle with the least possible vulnerability of your body or avoiding overly committing to the combat.

There are two main ways to peek:

In Rainbow Six Siege you want to maximize the number of fast peeks and minimize slow peeks.

Here are our main tips on peeking:

Holding angles means that you are keeping the line of sight which enemy has to get into to shoot you.

A common mistake when it comes to holding angles is to remain in the same position for too long, when droned out or when previously peeked.

Main rules for holding an angle are:

Movement in Rainbow Six Siege plays a substantial role when it comes to winning gunfights, as well as surprising your enemy.

Tips on how to move:

Adaptability is present in R6 Siege in two main ways:

It is an important skill to possess. Many tactics and plans seem all good and clear, but when things get rough and not according to our plan, we need to improvise and adapt.

The main questions you should continuously ask yourself to develop the right mindset, are: 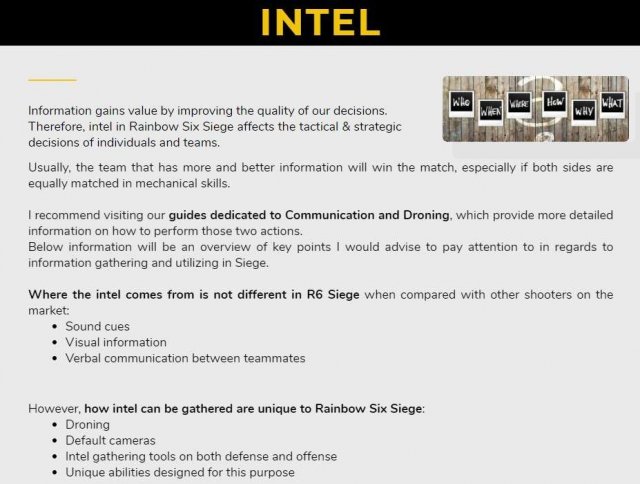 Information earns importance by improving the quality of our choices.

For intel-gathering our main tips are:

Intel utilization is a significantly more complex topic to discuss.

Here are two sample ways of utilizing intel in an advanced way:

This guide will go over what the clubhouse “garage spawnpeek” is and the ups and downs. Guide ContentsWhat the Spawnpeek Even IsThe Good Things About This SpawnpeekThe Bad PartsThe Second […]