Knowing that most of the game is played in the space stage, it is critical that you choose the right abilities during your finite playthrough of the Cell, Creature, Tribal and Civilization stages so that you do not gimp your creatures unnecessarily.

Note that you can go without most abilities, so if you wish to skip early stages you are free to. 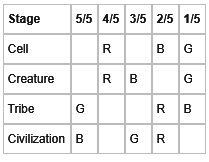 The cell type you get will affect what mouths you can get in the creature stage. If you start with an herbivore, you can never unlock an omnivore or carnivore mouth, for example.

You can sneak a probiscis on your creature, enabling it to eat both meat and fruit. This advantage does carry over into the creature and tribal stage, making food significantly less of an issue. However, this doesn’t affect what mouths you unlock throughout the creature stage. If you have decided on a type of mouth you want your creature to have, you must choose the appropriate cell type for it.

If you do a full game run, the following combinations are not possible:

All of these archetypes can be achieved with any mouth type if you start in the Creature or Tribal stage; if your first ability isn’t Power Monger, you should seriously consider skipping the Cell stage to get the mouth you want.

At the end of the creature stage, you are given your last chance to edit your creature’s appearance, so the DNA and parts you unlock there have a permanent impact on your creature.

The tribal ability you choose will affect your first city in the civilization stage.You can always take over the correct city type and make it your own, but you should be careful if you want to win economically and did not start with an economic city. Save scumming is recommended.

Do not worry about the outfit, buildings or anthem you use; these can all be changed at any time in the Space Stage.

When playing start to finish, you get the most abilities. There is only one build that is even arguably better by skipping the Cell stage, and that is the RGB Trader. See Straight to Creature.

Straight to creature has a number of notable quirks that allow these builds to fare better than you might expect. Bard, Ecologist and Knight are impossible to obtain without a full game run. Diplomat and Trader are comparable to creatures built from the cell stage, and the trader build is totally unique among its archetype!

Trader: RGB/14. You can give up Speed Demon for Gracious Greeter and the comparable Prime Specimen.

We will only list classes with leeway here; Traders, Shamans and Warriors have no choice and thus to list them would be to state the obvious. Diplomat is comparable to creatures built from the cell stage.

Diplomat: GB/10. Best abilities in the game, hands down.

Scientist: RB/7. Arms Dealer isn’t great, but you really don’t want to give up Spice Savant.

Going straight to the Tribal stage gives you the advantage of having all 2000 DNA and creature parts to work with. If you want to mix mouth types, you can do so by using the creature editor in the “create” menu, and then choosing that creature when starting the game. This is the earliest stage you can start at to control a race with mixed mouths. It is possible to include creature parts from the cell stage using a similar method; create an early cell in the “create” menu, and then edit that in the normal creature editor.

Trader grants you Spice Savant, arguably the most important passive in the game. Shaman gives you Green Keeper, which is recommended in some builds for its sheer convenience. Warrior gives you Pirate B Gone, which is less convenient, and a worse ability. It is however the only one that might remotely help a warrior nation.

Even traders are very poorly off, as Gracious Greeter is one of the game-changing abilities worth considering. The other two options are straight downgrades.

If you are going to go through the effort of the Civilization stage, you might as well also do the Tribal. The only conceivable circumstance where this would be ideal is if you wanted to farm achievements, since very few (if any) full game runs have you go red in the civilization stage.

You can only be a Wanderer. Unfortunately, this class doesn’t even have an ability. However, again, the abilities and such are only a small part of the game, and you can do just fine as a Wanderer.

You are also free to change your archetype to any class you want. This will not get you passives, but it will get you a better ability than none.

The most important ability is the active ability granted by your archetype, or philosophy. When ranked, these are: