If you’re wondering how to use a polearm effectively in Legend or Cata, this is the place to come to.

With the new DLC, there’s a lot of new polearms in the game now. Some may not understand how to use these effectively, especially on the more teamwork oriented difficulties. So, this is just a primer to let you know where you should be and what you should be doing. 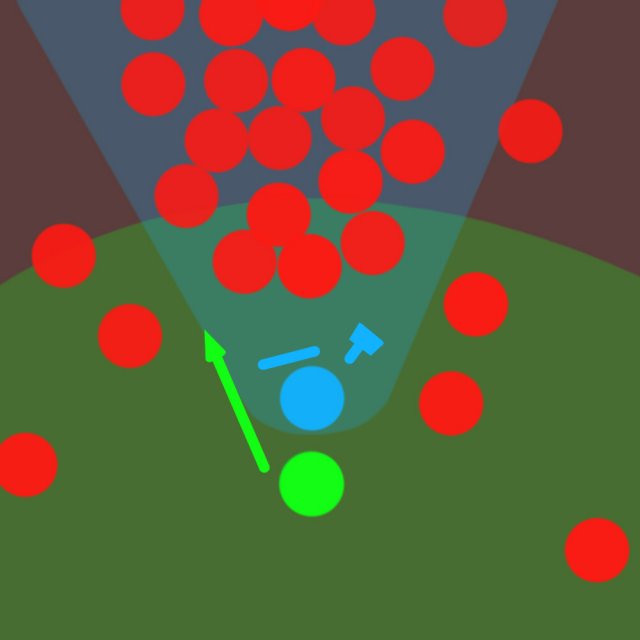 So, take a look at this picture. This is a basic diagram showing where you should be, and what you should be attacking.

If you’re color blind, proceed to the explanation further down.

If you’re playing on a difficulty like Legend or Cataclysm, you are going to have a tank. It’s just a necessary role, now. If you don’t have a true tank, just follow whoever the most aggressive melee fighter is, like a Slayer.

You should shadow this person and stand behind them. Let them do their job and assist them by attacking other spearmen, shields, or berserkers. Pick off the high priority targets.

In the diagram, you are standing behind the tank. You can move around a bit, of course. He’ll probably move a little too. But keep this basic formation.

The tank’s sphere of influence is a cone of 90 degrees. This is his primary focus, he can’t do a whole lot more than that. This leaves his flanks exposed, and he will die if he doesn’t have someone spotting for him.

Since your weapon is long, you can stand further back and still hit enemies. This puts you behind the tank, in a much safer location. Because you are safe, you have more freedom in where you turn your attention.

Locations of “The Lost Cog” for Okri Challenge: “Come To Bardin…” The Cog, will be in one of these locations. The Lost Cog Locations Location: One Location: Two Location: Three […]

Warhammer: Vermintide 2 – How to Complete All Outcast Engineer Achievements

This guide lists the most challenging Outcast Enginner achievements and how to complete them. How to Complete All Outcast Engineer Achievements / Trophies First of all: some challenges are extremelly […]