Walkthrough for “The Navigator” achievement as Portugal.

The achievement requires:
As Portugal, get owned provinces in Africa, India and Indonesia before 1500.

Whilst the Wiki lists the achievement as “Easy”, in my opinion it’s anything but, with timescales being relatively tight and plenty of room for mistakes. It would probably be better classified as “hard”, and currently only 0.7% of players have successfully completed it.

I prepared this guide using patch 1.28.3.0 with all major DLCs installed. In particular it makes use of Splendour abilities (Mandate of Heaven DLC).

Throughout the playthrough, the focus should be on generating diplo points, admin points and money. Major wars in Europe should be avoided, along with any territorial expansion that doesn’t progress us towards the achievement. If, for example, England is attacked by France, then we should dump our English alliance, since nothing ruins the treasury quite like being overrun by a major European power. We also won’t have any use for favours from allies – we simply keep allies to deter aggression from Morroco.

Other factors, such as Prestige and Military points, are far less important, and should have low priority when selecting options in events. For example if “The Last jousting tournament” event occurs then it should be declined since it costs something important to us (gold) whilst offering benefits that don’t greatly help our achievement progress, such as army morale.

In the first few months of the game you should do the following:

Delete the fort in Evora – it’s an unnecessary expense. Mothball the fort in Lisbon. We keep the fort active in Ceuta, since it’s the mostly likely point by which we could be attacked and is also vulnerable to Morroccan rebel stacks.

Split the light ships in half. Send 3, led by your explorer, to explore west Africa, with the remainder protecting trade in Sevilla. Your heavy ships and transports should be mothballed and your army set to minimum maintenance.

It’s important to set Granada as a rival. Set your second rival to one of Castilles rivals – preferably Morrocco or Tunis, but possibly Aragon. The third rival should be set after advancing the game a month and should typically be whoever Granada has allied.

Appoint level 1 diplomatic and admin advisors. Use estates to generate monarch points, Maximum monarch points (150) are available if an estate has more than 75 influence, so feel free to use abilities such as recruiting ministers (but not actually hiring them) in order to increase the influence of estates. Leave your country focus set to diplomacy, since you will need lots of diplo points.

In the early game we should focus on allying Castille and royal marrying both them and England. 2 diplomats should improve relations with these two powers, whilst the third should fabricate a claim on Granada’s territory of Gibraltar (Jabar Tariq). When your relations with England reach +100, the mission “English Alliance” will be completed.

You should also build 2 light ships (barques) and add them to your trade fleet. This will complete the mission “Competitive Advantage”.

Estates are reguarly used for monarch point generation and when we colonise we also want to use the abilities “Grant New World Charter” and “Establish New World Mission” on cooldown in order to maximise our colonial growth. However there’s a problem – initial Burgher influence is too low to activate the first ability.

Burghers typically do well in coastal provinces with trade bonuses, so I transfer Porto from the Clergy to the Burghers. This annoys the Clergy, but that’s not a serious issue.

There’s also a problem that too much of your country is initially in the hands of the Nobles, giving a constant danger of the Aristocratic Coup disaster – particularly if you use abilities such as recruiting generals which boost their influence yet higher. If this disaster is imminent then you may need to remove their control of two provinces – just make sure your army is in place and at full maintenance when you do so, in order to deal with any noble rebels.

Both Castille and Portugal start with a truce with Granada. However ours lasts a few months longer. As soon as this truce expires we will want to go to war with them. This war should be relatively easy.

Early in 1448, unmothball the heavies and transports in preparations for the war. In October 1448 raise our army mainainance to full, and arrange military access with Castille, moving our army to Cadiz.

Normally we can expect Castille to attack Granada in late 1448. Since we are still at truce, we will not initially be invited into this war. It’s important we don’t get invited later, so we want to declare our own separate war the moment our truce runs out in February 1448.

As soon as we declare war, move the troops to Jabar Tariq. Typically we will quickly occupy one or two provinces in the west of Granada whilst Castille takes the remainder.

If Granada is allied to both Morroco and Tunis, then we will not have naval superiority. All our ships including our trade fleet should hide in the north of Portugal, and only come out to occasionally snipe weaker enemy fleets. In these circumstances we can expect Ceuta to eventually fall, but that isn’t a problem – just use the army to counter any attempts to land forces on the Iberian mainland.

More commonly Granada is only allied to one of these powers. In this case Portugal and Castille have naval superiority, we get to keep Ceurta and we can use our fleet for blockades whilst letting Castille invade North Africa.

Either way, eventually Castille peaces out, taking whichever parts of Granada it occupies. This leaves us with full occupation of the remainder of Granada. We should have 40+% war score and Granada should have low enthusiasm.

It is important at this stage not to take any territory, since such territory will not only generate unrest itself, but will also be vulnerable to Granadan separatists from Castille, meaning we would constantly have to pull back troops to defend it.

Instead take something far more important in the peace deal. Humiliate Granada. This completes our second age objective, since we already have land in two continents, and greatly boosts our splendour point generation.

Early Colonization and the Second War

As soon as we have admin tech 5, we should take exploration ideas, and then we should start investing our diplomatic points into this idea group.

When we have the first idea (Mission to the New World) an exploration fleet should be sent to the Carribean. Discovering any land in America will give us our third age objective. We should immediately declare a Golden Age, which reduces power point costs, making our use of vital diplomatic and admin monarch points more efficient.

We should also have enough splendour to buy the ability “Portuguese Colonial Growth”. The +50 settler growth it gives is extremely powerful.

A couple of years before buying the second idea, we have some preparation to do. Start building a spy network in Jolof and use the fleet to move all our troops to the nearby island of Cabo Verde.

Select “Native repression” as our colonial policy for maximum colonial growth. From now on our troops belong in Africa and we should do whatever we can to avoid having to send them back to Europe.

Send the colonist to Cabo Verde. As soon as it arrives, use our pre-built spy network to immediately fabricate on Jolof and then declare war. Jolof may have alliances, which can typically be ignored, since they won’t arrive in time to help. An exception may be if Jolof is allied to Mali, which I haven’t seen, but if it occurs, I’d advise skipping this war.

After taking Jolof’s capital (Wolof) and their three coastal provinces sue for peace. Don’t waste time sieging down it’s allies and trying to get 100% war score. Our primary objetive in any peace treaty should be Trarza, which is the only territory in coring range of our existing holdings. However if the opportunity is available, take Cayor as well. If they have no allies then full annex them. This is our last offensive war so we don’t need to worry about Aggressive Expansion. 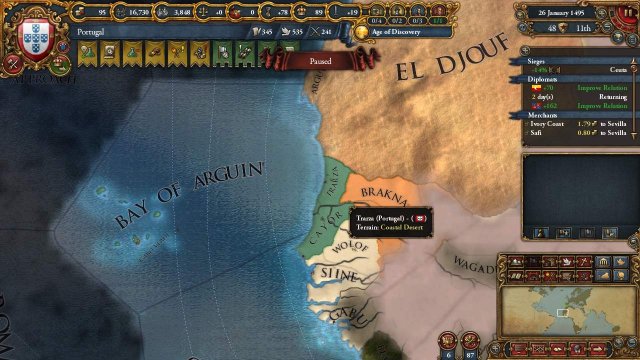 After coring Trarza, send our ships to explore more of West Africa. As soon as you see the Gold Coast, pull the colonist out of Cabo Verde and send them to this new location. Move all the troops and a general to fhe new colony to defend it and always keep them at at least half maintenance. When natives show up, increase maintainence to full mid battle and you should win.

Explore the south atlantic and continue to colonise along the coast of Africa in the order:

After colonising Lesser Namaqualand immediately build more light ships to reach naval capacity in order to complete the mission “The Cape of Good Hope”. Assign these ships to protect trade.

Meanwhile we should continue to invest in exploration ideas, taking the first four entries. After that, it’s important to stop. Getting the extended colonial range avaialable from Diplo tech 7 is far more important than the fifth colonial idea and will be necessary to reach Comoros.

As soon as you reach diplo tech 7, switch focus to admin. By this point you may already have admin tech 7, allowing expansion ideas to be selected. These help colonies grow faster, but I don’t believe they are necessary.

Onwards to India and Completion

When the colony in Comoros is completed, start another colony in Mauritius. This island is important. Although it’s close to Africa, it counts as being part of the Indonesian trade node,fulfilling that part of the achievement objective. The colony doesn’t even need to complete – it simply needs to exist to be eligible.

The explorer should also be sent to explore “The Arabian Sea”. They should find Goa, completing the “Push to India” mission. If the mission doesn’t immediately complete, check your mission tree to see which stage you are missing. The mission gives Goa to Portugal for free, and combined with Mauritius and our African holdings completes the achievement.

I completed it in 1495, although quicker is certainly possible.