Some of you are probably playing MK for the first time since “long ago”, if ever or haven`t played MK9/10. For this reason i will share a bit of MK story. Just a bit. You can start with Komplete Edition.

MK11 storywise is sequel to MKX. MKX is set many years after Komplete Edition (aka MK9). MK9 is set in different timeline/universe (whatever) than pre-MK9 games.

In MK9, we can see a an intro video where Raiden from the future (one of possible outcomes, if you prefer) is fighting Shao Kahn on Pyramid of Argus (where all characters died. Final MKA boss arena). Shao Kahn won and at the last moment Raiden somehow contacted his past self or rather Raiden from different timeline by now, to tell him one phrase:

Later we can see the original “classic” tournament. This time however, it will end differently… I don`t want to spoil you everything. You can watch videos or play those games yourself. All i will say is that the outcome of new timeline is different than the one in classic MK games.

After this story. Elder God Shinnok Finish him! appeared and said that soon he will be free and Netherrealm basically will own other realms like a b*tches. Well, maybe not exactly his words, but the meaning is same. Trust me.

He didn`t lied. MKX is set around 20 years after MK9 (not counting prologue). After Shao Kahn dead, new ruler of Outworld must be found. On one side we have Mileena. Shao Kahn`s daughter and his “true” successor. On another side we have new character Kotal Kahn. Who also wants Shao Kahn throne. We will see Mileena/Kotalconflict as part of the story and also continuation of Shinnok`s plans.

There is also MKX comics, which will show what happened between MK9ending and MKX story mode.

What happened after MKX ending you can see in MK11 intro.

1. X-rays were replaced with Fatal Blows. Similar thing, but unlike X-ray, you can use Fatal Blow only once per match and only when your health bar is below certain amount. Consider it “Saving blow”.

3. No sh*tty variations. Yay!. You can now select character with few base powers and add powers of your choice. There are 3 slots for powers. Some powers use 2 slots, to fix balance. Usually it`s 1 slot per power.

Instead of fixed costumes, we have customizable parts.

Scorpion, for example, has different models for his spear, mask and swords. Sonya has turret, hat/glasses/face part and gloves. Sub-Zero has different masks, axes and throwables.

All those items must to be unlocked in Krypt, Towers of Time, AI Battles or be bought in Premium shop. This a similar, yet perverted version of Injustice 2 customization. While in Injustice 2 you can enjoy the game and receive rewards from towers, in MK11 you have to grind like slave. Buying everything in Krypt is a pain in the eyes. Some items require X amount of fatalities against specific character. Some require X amount fatalities/brutalities and mercy for special items, which will allow you to unlock some doors. No guarantees that you`ll get new skins. There are duplicates and you`ll have to refresh chests many times before you`ll get what you want.

Devs lowered some requirements on patch for heads, but it`s still bad. To make it even worse, we have now 4 currencies. About this in next chapter.

We have four currencies now.

Koins are the most common currency. Easy to get. Souls are a lot harder to earn, but rewards are usually better in soul chests. You can find Souls in Towers, as reward. Hearts can be obtained by performing Fatalities and Brutalities. ToT is best choice.

With Time Crystals you can buy items fast in Premium shop, without wasting more time in Krypt or winning them as reward in ToT. Problem here is price. You have two options. Grind or buy them with real money. Prices are around 700-2000 per item. You can get 10 crystals for each level of your kombat card and some as rewards in ToT.

How to Get Gear and Skins

Except chests, other options should guarantee skins.

Heads in Krypt require fatalities or brutalities. As far as i know, to get heads you have to do everything in Towers of Time only.

When you picked a tower:

Before tower match started. When your opponent image on tower and your character image on the right. Press Square(PS4) or A (PC). Pick any augment you want. Some augments can reduce tower modifiers. Check icons. It can be Dark, Magic, Blood etc. It will be a lot easier to win with correct augments. Some can heal you, some can attack opponent, some can call other character for attack.

How to Improve Performance and Make PS4 Icons Appear

This is not a panacea, but it did helped me. Game looks good and works good, for now. 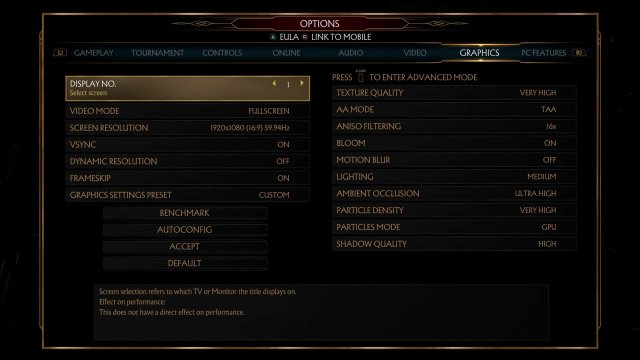 As for controls. If you have DS4 controller and you see Xbox icons instead of PS4 do this:

Game name/icon in Steam library – Properties > Steam input per-game settings – Forced off. Delete any non-official software you have for controller.

If it didn`t helped, then try installing PS4 Remote Play. Also configure your controller in Steam BP mode, even if you used Forced off option.

If you plan to play online, then PLEASE follow steps below.

1. Be sure that your fps bar is high/green. When you launch online for the first time, it will run a benchmark. If your fps is below high or it was high, but you know that it can become unstable, then lower your graphics settings. Playing with low fps is annoying for both sides and can be a real nightmare.

2. Check opponent ping. Below 3/4 bars? Find another opponent then. 4/4 is the best for stable connection, but 3/4 will work too, as alternative. Lower than 3/4 – Decline and find next opponent.

3. Don`t use Wi-Fi!. I understand that situations can be different, but no adequate non-wifi player would want to play with Wi-Fi user. Wi-Fi players are like FGS veterans. They can be annoying, they do bad things and when someone tries to tell them to stop doing what they`re doing – They don`t care. Don`t join the a-holes army!

4. Check your internet speed. I think that playing with internet speed below 10Mbit/s (1Mb/s) is not cool. On the other hand, if in your region slow internet is a common thing, then play with your comrades.

5. If someone uses duck command too fast few times in a row, that`s not always a “tbagging”. I had a match when i won 2 rounds in a row. Incredibly amazing Nice guy like me tried to show “Mercy” and sometimes fail. Opponent didn`t understood that and I am 99% sure that he thought that I am typical toxic FGS player. He disconnected on “Finish him” screen.

6. Don`t disconnect. It`s immature. I mean, unless you are literally immature or have huge lags etc, then okay… As an adult, don`t do that. It won`t benefit you in any way. You won`t look good after that.

Dictionary is based on information gained from wiktionary.

Chip Damage – The reduced damage a character takes from an attack while blocking. Generally an extremely small amount; in some games, normal moves do not cause this.

Juggle – A combo in which the victim is hit multiple times in midair. The move used to start the juggle is called a “launcher”.

Poke – Generally a quick attack that is done to hit an opponent from the maximum range that specific move will allow, generally done as a single attack to accomplish any of the following things (sometimes more than one): to stuff an opponent’s current attack, even one of their own pokes, to create distance between the two players, to deal “safe”, unpunishable damage; to hit confirm into a full combo.

Footsies – “Footsies” is archaic slang for the mid-range ground-based aspect of fighting game strategy. It refers to a situation where both players are outside of combo range and attack each other with mid- or long-range, generally safe attacks (pokes). The ultimate goal is to control the flow of the match, bait the opponent into committing errors, and attempt to punish every action.

Safe – A move that cannot be punished if blocked. Usually these moves have a very short recovery time, or they block stun the defender for a long enough so that the attacker can block before the defender is capable of retaliating.

Wakeup/Getup – The frames in which a character is considered to be standing back up from being knocked to the floor. A wakeup game is the ability for a player to choose how they stand up. Options open to the player may include: rolling towards, away from the opponent or attacking.

Cross-Up – A cross-up is a situation where it is more difficult for the player’s opponent to determine whether they must block left or right. Most commonly, this is done by attacking while jumping over the opponent so that it hits as one passes over them. Cross-ups are most easily used in many games after knocking the opponent down, as the opponent will be unable to move or attack while the attacker begins the cross-up. Cross-ups are usually not available in games where blocking is bound to a dedicated button, rather than moving backwards from the attacker, such as the Mortal Kombat series. The term ‘cross-up’ generally refers to jumping attacks, but is sometimes applied to any situation in which an opponent may have difficulty in determining which direction to block in. In particular, when a dash passes through the opponent it can create cross-up opportunities on the ground.

Zoning – Zoning is a tactic in 2D fighters usually used at mid-range or far mid-range, the purpose of which is to control space and keep the opponent far away using projectile attacks or long reaching pokes. The idea is to space oneself so that they are in a position to respond to or punish any entry angle or attack of the opponent’s. Ideally, the player can use certain pokes and attacks to beat the opponent’s attacks, punish their advances or jumps, and hopefully shut down their offensive options, while landing hits. In attempting to zone, it is important to know the properties of one’s own attacks as well as the attacks of the opponent, in order to find the best move to use in countering the opponent’s move. The ability to predict the opponent’s next move, and having good reflexes to react to that move, are also important.

Turtling – The act of staying in a defensive stance for most or all of the match, only attacking when the opponent misses, or with a reversal move. Usually done when far ahead in the match and running low on time, to avoid unnecessary risk.

Rushdown – The complete opposite of turtling, a rushdown style is considered to be completely offensive, often using a huge variety of mix-up, pressure, and mind games to force an opponent into a suboptimal defensive situation, seeking to create openings and watch for sudden mistakes to capitalize with proper, devastating punishment.

Mind Games – Mind games are described as the use of psychology to maximize one’s chances of winning. A big part of mind games is archetyping, dissecting the way an opponent plays and then immediately preparing oneself to ready an effective counter strategy, as well as a great deal of other tactics that take advantage of the amount of predictability present within an opponent.