Aim to the face, but not always 🙂
This is a aggro deck mostly red, but with some tools to deal with others decks. 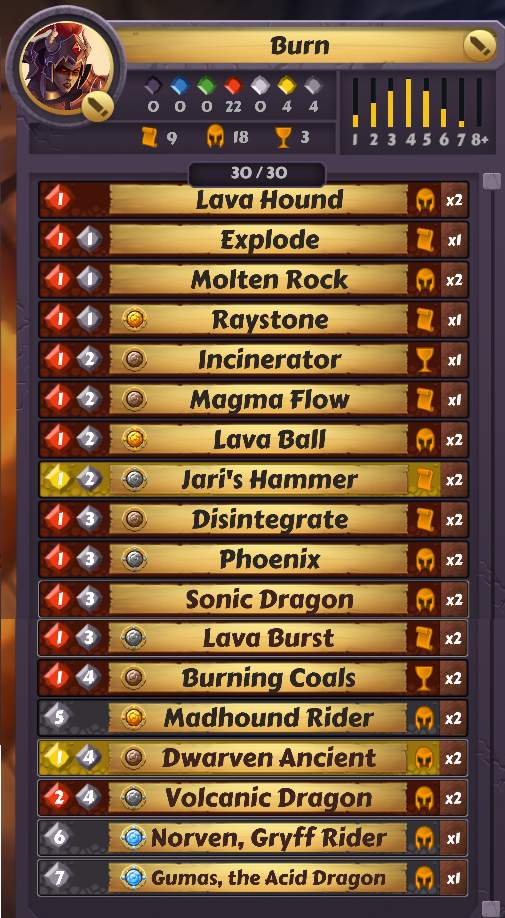 Try as much as you can to control the board and keep some creature on your side to attack your opponent. If it is not possible, clear the board with Lava Burst.

When you draw, hold Lava Ball and Disintegrate a bit, they’re great as finishers, but they’re also useful for eliminating threats like Pit Lord.

Volcanic Dragon is a great card to remove other creatures from the board and clear the path to attack the opponent.

Always be aware of the opponent’s health points, at any time you can have lethal damage.

Save your Incinerate for some Shaman’s Relic or Altar of Blood.

Burning Coals is quite versatile, use to destroy creatures, damage the opponent and always save a charge for the opportunity to use the Explode.

Your success with this deck will depend a lot on your starting hand.

It’s always good to start with Lava Hound and Molten Rock, but against mill and necro decks try to get Incinerate.

Against yellow and white decks Lava Burst is requested to eliminate their creatures.

This guide describes the basics of an yellow aggro deck based on small creatures with Rush, Anvil from Lofar and Stomper. In addition to being a lot of fun to […]