This guide describes the basics of an yellow aggro deck based on small creatures with Rush, Anvil from Lofar and Stomper.
In addition to being a lot of fun to play with this deck it is also very competitive, although a bit inconsistent sometimes. 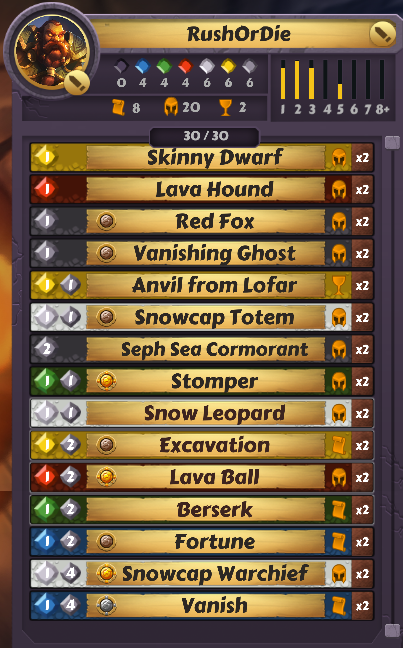 Despite being an aggro deck in the best “face” style it will require a bit more strategy than simply attacking the opponent.

The main idea of ​​the deck is to always inflict damage to opponent through small creatures with Rush until you can make a lethal combo with various creatures and Berserk or Snowcap Warchief.

One of the deck’s main cards is Anvil from Lofar, this card will allow you to play several creatures on the same turn. Use Vanishing Ghost, Snowcap Totem, Excavation and Fortune to buy cards and recharge your hand with creatures. Always use Anvil to play with Skinny Dwarf to generate mana.

Stomper is another card with key role on the deck, it will put some pressure on opponent with a creature that can get out of control quickly, if not removed. Try to play it when you can play other creatures on the same turn, but if the opponent’s field is empty it can be good just play it and in the next turn play more creatures to buff and attack.

Lava Ball has two purposes on the deck, the first one is to remove creatures that can offer some threat. The second is to help compose the lethal combo.

Now the latest addition on the deck: Vanish. Which is a rather curious card for this deck style. It also has two purposes in the strategy, first is to clear the field for you to make your final attack, especially against large creatures such as Pit Lord and Hydra. The other use is to bring back to hand cards like Skinny Dwarf, Snowcap Totem, Lava Ball or Rush cards to attack again, in the best Mind over Reality style.

Always look for Anvil from Lofar, Stomper and Skinny Dwarf. Vanishing Ghost and Snowcap Totem are good too.

Aim to the face, but not always 🙂 This is a aggro deck mostly red, but with some tools to deal with others decks. Cards List Basic Strategy The basic […]