The majority of terms that are used in Echo of Combats, such as “deck”, “hand”, “table”, “graveyard” and many others, should be already familiar to you. Below, we will describe only those mechanics and features that are unique or may differ from your past experience.

Each player in Echo of Combats has two attributes: Power and Mana. Power indicates how many Mana drops the player gains at the beginning of their turn. The mana pool indicates how many Mana drops the player currently has. Unused mana is stored for the next turn, and it can be pooled in the course of the battle. There is no cap on how much mana a player can have. 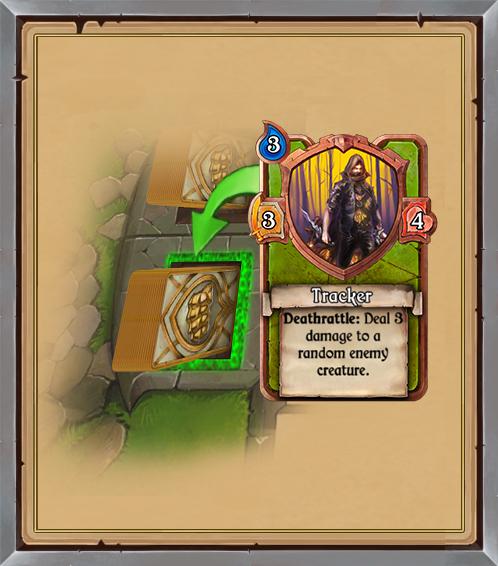 Once per turn, the player may discard a card from their hand by discarding it onto their deck. After discard, they may choose:

Players should make their choice wisely, based on the current situation. Remember that you don’t have to discard your cards if you don’t want to.

The cards that have been thus sacrificed (discarded) are returned back into the player’s deck. 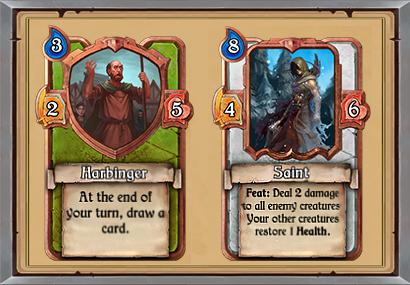 That is, each player’s half of the battlefield contains three first row cells and two second row cells.

Creatures in the first row protect characters in the second row making them untargetable by melee attacks. 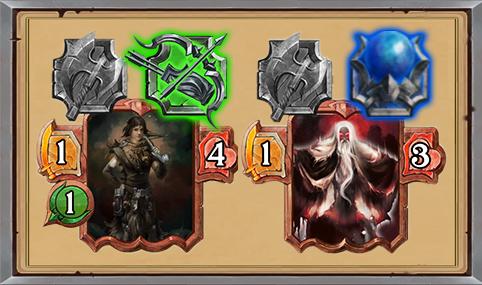 In addition to basic melee attacks, characters in Echo of Combats may also have an ability to make a Ranged attack or to activate a Feat.

Feat is a special activated ability that may be used instead of a regular melee attack. To activate a feat, you have to click on the creature having this ability. The action menu will pop up, where you can choose between making a melee attack and activating a feat. Since activating a feat counts as an action, after using it, the character is exhausted.