This guide should help you with beginning terraria, and teaching you about classes, co-op, and modding the game.

This guide is a basic walkthrough of Terraria for new players, and should not be followed to the WORD, there is a lot missing, all of hardmode, some bosses, biomes, ect ect.

Upon launching the game for the first time it will ask you to choose your language, of course, this is obvious.

After choosing which language you want to read everything in, (which, this guide will obviously use english in.) you will get the real menu, and something I reccomend to do is to into settings, cursor, and give it a border colour to make it more noticable in certain situations.

Once you get this done, you will either enter singleplayer, multiplayer, or just quit the game because ‘screw this’, if you’re that kind of person, just. why are you even reading guides?

Upon selecting singleplayer or multiplayer, you will need to create a character, while most of this is meaningless, some of it does mean something

The only thing that matters here is what ‘core/difficulty’ the player is, Softcore is reccomended for beginners and is the default, making you only drop half your coins, while mediumcore makes you drop all your items. Hardcore, deletes the character when you die, and is reccomended only for expert/veteran players, or if you want a real challenge.

Worlds have 3 main factors going into them, size, mode, and biome.

The size mainly depends on you, and if it’ll be multiplayer, Since this is your first playthrough, a small world is reccomended, as all things are closer together and easier to find, but, there are less resources and less building spaces, so medium is all around best for that, while large is only useful if you’re going to be playing with a large amount of other people, aka, for servers.

If this is your first playthrough, I reccomend normal mode over expert, as it makes the game much more difficult, but still more interesting, it makes you drop 75% of your coins, and instead of 2 armor equalling 1 damage blocked, 3 equals 2 damage blocked, which is great for tanks.

Crimson and Corruption are the 2 ‘evil’ biomes that can go into your world, corruption being added first, and crimson after 1.2 update, Corruption being ‘easier’, but Crimson having more things I prefer, it’s more up to your choice, as there are no real major differences, but, Corruption is better for building because of the Corrupt bricks. You can, however, get both in one world once you progress.

Upon Entering a New World

First thing you will want to do of course, is cut down as many trees as possible, get at least 500~ wood, and find the snow biome, which I will explain in the next section.

Once you gather enough wood, you will want to make a house, which should look something like this. 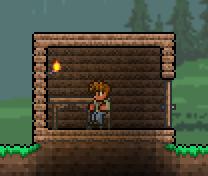 You will want to make a lot of houses, as shopkeepers/NPC’s move in, which sell lots of important stuff and allow you to sell stuff to them.

After this, you will want to go mining for as many ores as possible, prefferably platinum/gold, but get lots of iron/lead too, it is very useful late-game, you will also want to gather as many life crystals as possible, as they increase your maximum life and make life-regerating objects, as well you want to gather fallen stars at night on the surface to gain more mana.

Now onto the interesting and my 2nd favourite part of terraria, classes!

There are currently 4 main classes and 1 side class.

Then, there’s the thrower, who isn’t really supported and I don’t reccomend trying to actually play.

You can always be all of them at once, but I like limiting myself to only 1 damage caste of weapons.

Accessories are a major part of the game, and something I consider very valuable, they can also be used as vanity, but also provide powerful buffs ranging from great damage increases, innability to be knocked back, and, and there are a few early game ones you should get.

The hermes boots are always required if you want to progress easily, no matter your class, expert mode or not, it is practically REQUIRED for your first run, you can find it in gold chests underground.

Cobalt shield is an accessory that stops you from taking knockback and is very good for melee, as you can run through enemies, it also gives you 1 defense.

The mana flower is a mage accessory found in the jungle that reduces mana usage, and can be combined with a 1 band mana potion to make a accessory that automatically uses mana potions when you run low.

Assuming it didn’t randomly spawn already, once you have at least full iron gear and a decent weapon and enough health/mana to take sustained attacks, and prefferably an arena that’s a comfortable size with some campfires and prefferably sunflowers planted around it.

To spawn the Eye of Cthulhu, you want to bring 6 lens to a demon/crimson altar and make the Suspicious looking Eye, which you can also find in gold chests, you then want to go to your arena and summon him at the begginning of night, but you also want to stock up on healing potions.

Once the battle starts, make sure to dodge his attacks and only heal when needed and make sure to jump too, melee is harder in this fight as the EOC moves very quickly.

After beating the 1st boss you want to create a stronger weapon, and get the Dryad to move in, to buy purification powder, which is useful for going in.

Once you’re there, you want to travel into one of the mouths of the holes, make sure not to die from fall damage or the enemies, find some orbs and use the purification powder to dig down to them, and break the orb with a hammer, be careful not to break 3 until you make an arena for the boss it spawns, which depending on crimson or corruption, you may or may not be ready to fight it depending on that.

The dungeon is found in the direction of the snow biome, and is very very needed for most runs.

For the arena you want to have a nice flat area, maybe 1 or 2 platforms, skeletron is an easy boss if you aren’t in expert mode, but, a arena/farming area is very nice in the actual dungeon.

The Eater of Worlds is a fearsome worm that travels through the ground, and is pretty easy to kill if you’re a melee.

The arena is simple, but you will want it to be on surface corruption, make a fast way to get up there, prefferably using platforms, and make sure it’s pretty long and only has to be a couple platforms high, you of course want campfires there as with all arenas.

The Brain of Cthulhu is a large brain that is surrounded by many creatures you must defeat before you can damage the main boss, and grenades are very powerful against them.

For the arena you can just use the main chamber of the crimson chasm, try to put down as many platforms as possible in the chamber, as the brain teleports around it randomly, mobility is a must, as well as enough platforms to be able to move around.

After all that, you want to go near your spawn and dig straight down to the bottom of the world, a nd collect some obsidian on the way, straight into hell, where you will be mining for a bit for hellstone, and if you have an obsidian key, explore for some chests.

After a bit you want to create a single straight path through a lot of hell, and collect a voodoo doll, and also collect a hellforge, which is very useful.

Final Boss (Not Really, at All)

After you make the long platform and the best weapon/armor you can find, you want to get as many buff potions, health/mana potions you can and gear up for the final fight this guide covers, The Wall of Flesh.

After you defeat The wall, your world will be transformed into hardmode, there will be new bosses and enemies, new resouces and weapons.

The fight goes as so, you throw a voodoo doll into a pool of lava and run on your path, attacking the wall of flesh as you run away, It’s best to kill the small mouths that are connected to it first, after you kill those, aim for the eyes, you deal more damage that way, and once you kill him, take the hammer, and break some of those crimson/corrupt altars.

Modding the game is very easy, and requires very little skill or effort. Simply download the latest tModLoader version, move the .zip into the terraria folder, and extract it, then run the .JAR , then go into the mod browser and download any mods you like.

This guide will show you how to get moon lords legs along with some other secret items and content. Guide to Finding the Moon Lords Legs The Steps and Some […]

Terraria – How to Kill the Destroyer (Boss Guide)

Terraria Guides: Beginner’s Guide. Jeepers Creepers Achievement Guide. Guide ContentsThe DestroyerStep #1Step #2Step #3 The Destroyer Hello, If you are reading this, you are most likely struggling on The Destroyer. […]