An introduction to how to play one of the most popular game formats in Rise of Nations, Nomad. This guide will help you become an intermediate player in Nomad.

Nomad is a game format in Rise of Nations. It can be played as 1v1 or any team variants. The rules are as follows: 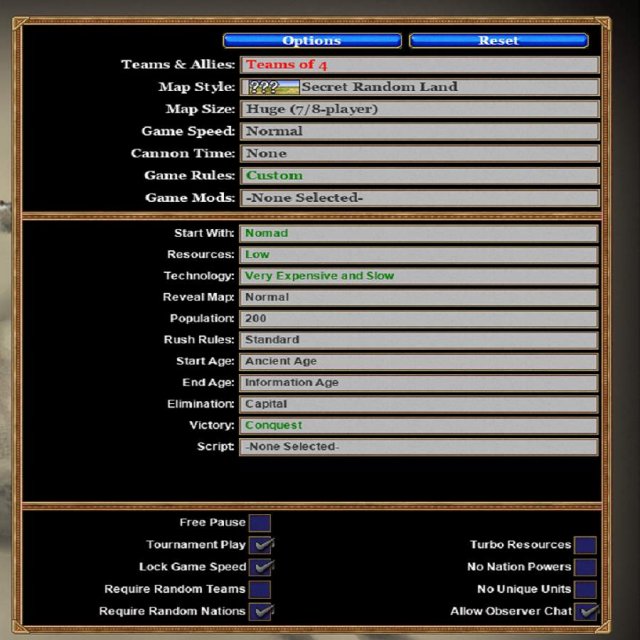 Nomad has two primary differences from standard. The first and most important is technology. Nomad technologies, including non-library technologies, cost 1.5x their usual amount (aside from Knowledge costs, which are doubled) and take 1.5x as long to research. This means that players advance much more slowly throughout the ages. Gunpowder Age is considered late game in Nomad, for example. This change also means a big variation on build orders one might use in standard play.

The other main difference Nomad has is in the name itself. Instead of starting with a city, you start with 3 citizens and half as much starting resources. You must build your first city, farms, and woodcutter camp from scratch, which also means Nomad starts slower.

These differences create a very different experience from standard games. Instead of the massive amounts of multitasking and speed that standard rewards, Nomad instead rewards strategy and planning, as well as micro. There’s nothing wrong with either game mode, it’s just up to personal preference.

A note about this guide: This guide is directed towards players beginning at Nomad. Some of the information in this guide will be incorrect to do if you are an intermediate or advanced player, but everything is simplified for the beginner players.

How Do I Get a Strong Start in Nomad?

The following section will show you what order to do things in order to get the best start in Nomad.

If you dislike reading, there is a video version of this, made by Rise of Patience.

I suggest both reading this section and watching the video.

When you start a Nomad game, you start off with your 3 Citizens and not many resources. Bring those Citizens together and put down your city. Try to find an area that has a good location: it has good wood, is near a rare, or is protected by terrain. Use all three Citizens to build.

When your city finishes building, immediately build 2 Farms and a Woodcutter’s Camp, and also continuously build Citizens. You should scout with 2-4 Citizens. Keep building Citizens and Farms, and put your citizens to work.

In Nomad, it is important to scout with Citizens because you do not start with a Scout. Scouting gives you crucial Ruin bonuses as well as tell you information about where the enemy is, where good rares are, or where to build your next city. Do not use Auto-Explore! Instead, right click on the minimap to manually set the Citizen’s path. These Citizens should scout until you are nearly at Classical Age.

After you have 5 Farms and a Woodcutter’s Camp all filled up by Citizens, you should have at least +60 Food and +60 Timber. Stop making Citizens and put down a library. This should happen preferably close to 4 minutes game time, but can vary depending on how many Ruins you have found and your nation. If you consistently put down your library at 4:30 or later, you should practice in solo games until you can put down your library earlier.

After your library finishes, research Commerce 1. In the meantime, take a look around the map and decide which rares you want to use. The power of the rares vary based on situation, but in general, rares that give Wealth or cheapen things are very powerful.

If the map is a land map (i.e. if there is no water on the map), you should put down a Market. Send 3-4 merchants to the best rares that you have access to. The rares do not need to be inside your territory, but preferably are in safe or remote locations.

If the map is a water map (i.e. if there is water on the map), you should put down a Dock first to fish. Put down the Dock and make two Fishermen. Afterwards, put down a Market and send merchants out.

At this point, you should have stockpiled some Food because you haven’t been spending it. When you get 180 Food, research Civic 1 and build your second City. Try to make sure you have at least 1 mountain in your territory after you build the city. Build a Caravan.

When your second city finishes, you should increase your Food income and Timber income to +100, and try to maximize your Wealth income. Build Farms if it is a land map and Fishermen if it is a water map. Make any extra Citizens necessary to get that +100/+100 economy.

After you finish building those military units, you should research Science 1, then Classical Age. At this point, bring any scouting Citizens back to your cities. If you have extra wood, you should make another Market or more Fishermen to increase your Wealth income (depending on if it is a land or water map, respectively). You should try to begin researching Classical Age around the 10 minute mark or earlier, depending on your nation and your rares, as well as your Ruins. Practice this in solo games.

This start is pretty much muscle memory to most experienced players (aside from variations one can do if they are more advanced), but for beginners, this is a very safe and solid build order.

After I Research Classical Age, What Should I Do?

By this point, you want to have a plan in mind. Are you going to do a quick attack and rush the enemy capital? Are you going to sit back and wait for a technology/economic advantage? There are many different strategies, but these two, rushing and booming respectively, are the two basic strategies in Rise of Nations.

Again there are Rise of Patience videos if you prefer watching. I recommend both watching these videos and reading this guide.

Let’s start with Booming. When you reach Classical Age, you want to spam Citizens from both cities. Build 1 University, a Mine, and a Senate at the most backwards city. At this point, you want to get enough Metal to research Republic at the Senate. Pause Citizen production in order to get enough Food, then research Republic. Build Scholars at your University and try to fill it up (7 Scholars).

Once Republic finishes, try to get your Food and Timber income to +150, and your Metal income to +70/+80. You should also put down a Stable and a Tower, if you have not done so already. Stop making Citizens once you have reached this economy. Again, if you are on a water map, do not make Farms, build Fishermen instead.

Research Militia at the Tower. This is a crucial upgrade that can protect you from rushes. If you have the extra Wealth to support it, put down a second University and crank out scholars.

At this point, research Military 2. Military 2 allows you to build Heavy Cavalry and a Siege Factory, among other things. Begin building military units, especially Bowmen and Heavy Cavalry. Try not to build too many Hoplites or other Food based units, you need Food for your research. Do not build Light Infantry, they only become useful starting in Gunpowder Age. You don’t need to upgrade your units unless your opponent is attacking you.

Research Civic 2 and put down your third city, and make a Caravan. You should have Military 2, Civic 2, Commerce 1, and Science 1, which will make Medieval Age available to you. Research Medieval Age as soon as possible.

That is the basic Boom build order. If you have that down, you can pretty much call yourself an “inter”, or intermediate player.

The Senator rush mostly follows the boom build order, with some key differences. You probably will not be able to afford as many scholars, but you should still build some. You want to have more metal available than a standard boom, maybe +100 or so, which will help you afford important units like Hoplites, Heavy Cavalry, and Catapults. Your army composition should be Archers, Phalanx and Heavy Cavalry, with some Light Horses sprinkled in if you want. Build two Catapults to siege your opponent. Make sure you do not compromise your economy heavily while you do this: you still want to have +150 Food and +150 Timber income. Also make sure to build scholars as you will likely still need to research Medieval Age.

The Despot Rush on the other hand is much more all in. Once you reach Classical Age, put down a Senate, Stable, and Mine. Research Despotism and make sure you have at least one tower. You need to make some citizens, but not nearly as many as when you research Republic as you can’t get above 100 eco. Get your Metal income as close to +100 as you can and research Military 2 as soon as possible, as well as Militia at your tower. You want roughly the same army composition as the Senator rush, but this time convert your citizens to Militia to bolster your army. You probably need to hit the enemy’s capital, so bring all your troops there and attack! Make sure to continuously produce units as if you do not kill them in the attack, your economy is crippled.

What Do I Do if the Game Goes to Medieval Age or Beyond?

By Medieval Age, you should have been making army. There is no set build order anymore, but in general, the research in the library you should take after Medieval Age is:

If the game goes late like this, you need to make as many scholars as you can. In addition, try to make a Wonder or two.

If you can reach this point in the game, especially against intermediate players, you can also call yourself an “inter”. Good job!

Some final thoughts I wanted to reiterate:

As you grow more experienced with these build orders, you will find they are not adequate for all situations. This guide is meant to be a beginner guide that has build orders that will work for most maps and nations, but not all. When you can do these build orders effectively and consistently, it’s time to start looking into more advanced strategies.