Barbiche’s strength is not with his parameters, which are very modest for a Boss. A Sorcerer can do more damage than Barbiche. Barbiche’s talents are made in such a way that you need to either overtake him in the round by attacking before he attacks. Or on the contrary, let Barbiche be the first to attack you.

Each round randomly generates one of the Aspects of Magic – Earth, Fire, Air, Water, Arcane, or Dark. Depending on the Aspect, it is beneficial for you to either overtake Barbiche or to choose Wait. If you try to suppress Barbiche by force, ignoring these magical Aspects, then the combat turns random. For example, when Barbiche has the Aspect of Water, in no case should you attack him first, as he will receive 3 charges of powerful regeneration.

Most often it’s better to attack the Boss first if the Aspect of Earth, Fire, or Air has worked.

Most often, it’s better to let the Boss attack first or to choose block if the Aspect of Water, Arcane, or Dark Magic has triggered. In order for you and not Barbiche, to choose who will go first, you need to take care of acceleration for your units or use slowing talents/equipment against Barbiche. At least one of your units, that can attack Barbiche, must be faster than Barbiche.

How to understand which Aspect of Magic is active? The visual effect on the Boss symbolizes this. There is also a description of the abilities in combat. Tooltips with descriptions appear if you hover over the Aspect icon with your mouse. 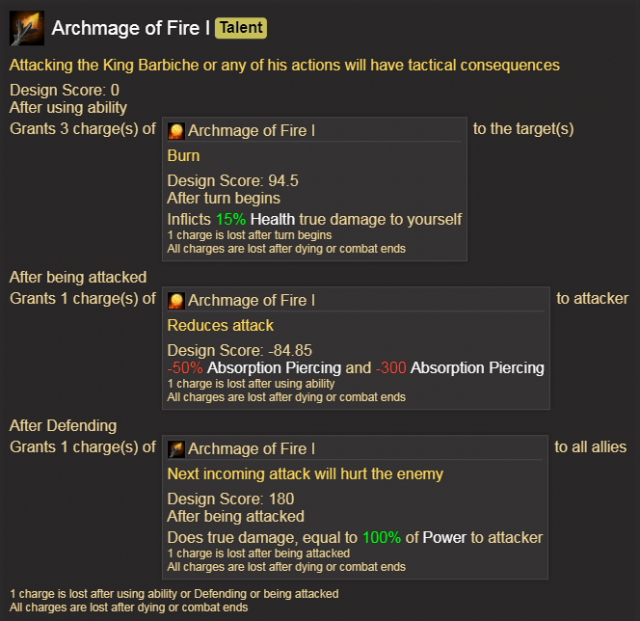 Attack the Boss at least once a round

Another important tactical feature is that if no one attacks Barbiche during the round, then he will generate 1 charge of buff that increases damage and speed. That is why it’s worth attacking the Boss at least once a round.

Very rarely, Barbiche can suddenly throw a buff on one of your units. For example, such that if you use the tactical command “Wait”, then your Damage and Heal will increase. The catch is that if you use the “present”, everyone in the Barbiche squad will receive the same buff. Here you need to decide whether it makes sense to use the “gift” or not.

Suppose your mage got such a “gift” that only works after his attack. Do not want to buff enemies – let your mage not attack this round.

How to overcome Barbiche’s defence

Barbiche has good protective parameters – Armour and Absorption. The talents that increase damage against such well-protected targets will work well against him. The archer-man and the woman-warrior have such talents.

If you have a warrior with huge damage, but unable to penetrate the Armour, then archers, both male, and female can drag the piano for him, by having learned the talent “Heavy Draw”, debuffing the enemy defence.

How to reduce Barbiche’s healing

To reduce/minimize the healing of Barbiche – use the talents, which lower the parameters of Vampirism and Restoration. The female-mage and female-warrior have such talents.

The female-archer has an interesting talent, aimed against healers – the more outgoing healing those have, the higher the damage they get. And Barbiche has the ability to heal.

Might is Right Guides: Basic Guide (Tips for Starting). How to Pump a Low-Level Mercenary? How to Play the Sentry. How to Use Life Steal. How to Kill a Healer. […]