It’s Pays to Land Away from the Action

Your initial instinct might be to land smack-dab in the middle of all the action when the match starts. This isn’t a bad idea to stack up Killstreaks, but it does pay to land away from the action if your team isn’t communicating or if you’re not entirely confident in your twitch reflexes. You’ll have more opportunities to loot and discover items first with fewer chances of encountering areas that have been ransacked already.

If you land just outside of hot zones, grab that gear then join the end of the big firefight. This is risky since some players might have Killstreaks ready to go, but it could pay off to catch them while they’ve expended resources. 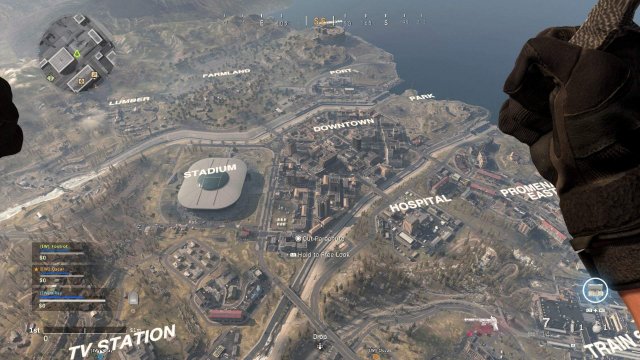 Benefits of Staying with Your Teammates

While the mainline Call of Duty multiplayer modes can be played solo, with little to no communication with teammates, Warzone’s Battle Royale is very much meant to be played with teammates. As such, you’ll want to stick with them at all times.

Staying in One Spot for Too Long Can be Detrimental

Much of the Verdansk map is made of areas from Modern Warfare’s Spec Ops mode and Ground War maps.

Familiarize yourself with as much of the map as you can (we recommend landing in a chosen area several times to figure out the lay of the land and go from there). While you move around, be on the hunt for weapon drops, Cash, Contracts, and Loadout Drops and make a mental note of them for next time if you choose to drop in the same area. There’s nothing worse than coming face-to-face with an enemy who’s fully decked out with top quality gear, while you’re equipped with a handgun.

The other thing to consider is that if you and your team stay in one spot too long, enemies can eventually catch on and swam you with better gear. If you’re okay with being bombarded and have a loadout that lets you defend an area, this might not be a problem.

Looting is great, but completing Contracts for gear is even better. Contracts are short missions you’ll see indicated on your map by a flag icon and offer some nice rewards.

Once you accept it, you’ll be tasked with securing locations or visiting various points across the map. Completing these Contracts will reward you with weapons, Killstreaks, items, Cash, and other enhancements. Again, it’s best to attempt completing contracts as a team.

Here are the three types of Contracts:

Get Used to Not Having Your Ideal Weapon Setups

This tip is harder to adhere to, simply because there are so many weapons that can be used. Depending on your play style, you might fancy yourself a sniper rifle, shotgun, or even a rocket launcher. It’s easy to become used to one weapon type, but in Battle Royale, that weapon might not be readily available.

When you’re out on the battlefield, you don’t always have the luxury of finding your favorite weapon. If you have Modern Warfare it might be a good idea to test out a few unfamiliar weapon types in multiplayer to prep for Warzone’s Battle Royale.

As you explore, you’ll also want to be on the lookout for Buy Stations. Here, you can purchase a Loadout Drop, which allows you to use custom loadouts.

Pay Attention to the Circle Collapse and Plan Routes Accordingly

The map space constantly gets smaller as the match goes on. When choosing your route, you should absolutely be paying attention to the circle collapse, which is the large space surrounded by gas.

It’s okay to move slowly from area to area, but typically, it’s best to avoid camping in one spot for too long. Players tend to panic when the gas gets closer, leading to careless mistakes and more opportunities for enemies to get the drop on you.

When planning where to go, always take the gas into consideration. Sometimes, it’s worth approaching the gas if a useful item lies ahead. You just want to make sure you have a safe means of exit, like a vehicle or at the very least, a gas masks.

It’s always a good idea to keep a gas mask on you. You can buy them from the Buy Stations, so make sure you save some money for one. Alternatively, you can find them from chests around the map or by completing Contracts.

Because the map is so expansive, you should take advantage of the game’s pinging system, which allows you to mark points of interest for your teammates. This also comes in handy when playing with a group who doesn’t have a headset. 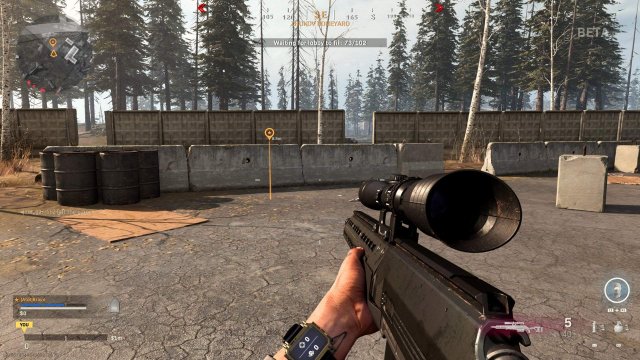 There are several different points of interest you can ping, from enemies, weapon stashes, equippable items, and even general locations on the map. Getting in the habit of at least pinging enemies will increase your chances of survival, especially if you’re sticking with your team.

Use Sound to Your Advantage

Although Battle Royale mode is prime for running around guns blazing, it’s a good idea to be aware of the sounds you, your teammates, and enemies make.

There are Warzone-Specific Versions of Perks

Try to Have a Varied Weapon Loadout

Because of the wide array of situations you can find yourself in, it’s a good idea to try to have as varied a loadout as possible. For example, having two snipers might not be ideal for close range situations.

Supply Boxes Have a Distinct Sound

That’s right, listen in for Supply Boxes as you play. They sound like a generator or some sort of heavy machinery. Try not to leave an area without at least checking into each of its Supply Boxes.

Take the High Ground When the Circle Collapse Gets Smaller

Once there are only a handful of teams left, the action tends to increase, while the distance you cover when moving around decreases. This is due to the limited space you have to move.

When this happens, it’s a good idea to stay high up so you can oversee the area in its entirety. This way, enemies will be forced to run out in the open, leaving them vulnerable for attacks.

It’s also smart to choose a high point in the center of the map, so you aren’t forced to expose yourself. This is easier said than done, especially in the heat of battle.

There are a few different ways you can get back into the action if you’re downed or are eliminated, altogether. Ideally, if you’re by your squad, you can be revived before you’re completely taken out. This means you don’t always have to quit out of the game if you go down. It by no means indicates that you’re out for good. Here’s what to do if you do go down or get eliminated.

If you go down:

If you get eliminated:

You cannot be revived if it’s too late in the game–Typically after 4 Circle Collapses.

Buy Stations Have the Tools You Need

Buy Stations serve as the in-game store for you to spend your hard-earned cash. There are a handful of items you can buy and you’ll want to take note of their prices so you can plan, based on your Cash on hand. Buy Stations are referenced on the map by a shopping cart.

Here are the items you can purchase from the Buy Stations:

Call of Duty: Warzone – Xbox One and PC Controls

This guide contains all used controls for Xbox One and PC controllers. Here you can find all move list and button layout for Call of Duty: Warzone the game. Call […]