A simple small guide about surviving as a hunter.

Having a hard time getting through the first dungeon? Maybe can’t complete the first quests? Tired of dying to the first enemy you see? Why not try being a hunter.

The goal of being a simple hunter is to build some gold up and get some footing before you go out and fight. This strategy can be done…well forever(or as long as merchants have gold). The first thing to do would be to select Dirwin(or once character creation is added make a character that is good with bows). This can be done with anyone as long as you have ranged abilities but Dirwin should be the easiest.

Then simply go out to forested tiles and find animals to hunt. So what should you look for?

Deer: Perhaps the most profitable animal I have found so far. When killed they can drop their pelt, antlers(if they are bucks) and meat. I think with good RNG getting all 3 you could make 100~ gold or more from a single kill for 0G investment.

Fox: While they only drop pelts from what I have seen these pelts have a good value to them. They will not attack you and flee when provoked. It is worth going after them.

Boars: Contrary to what you may believe. When provoked they will flee and not attack you. I have only seen them drop pelts and they sell so-so. You won’t get rich going for these guys. But you won’t starve either.

Rabbits: Perhaps the best of the worst. While I still hunt them if I get the chance they won’t make you rich off a few kills. However their pelts are 2×2 instead of 2×3 for larger animals meaning you could carry 5 large pelts and up to 5 rabbit pelts assuming an entirely empty inventory.

Wolves: The most common animals I see. Their pelts sell nicely for how common they are. If you see a pack of them attack one at range and take them out one at a time and you can make a nice chunk of gold doing so.

Skills: So what should you do from the moment you start the game? If you are starting Dirwin go straight for Take Aim. This reduces the starting -55% accuracy to your bow down to -5% for 1 turn. This makes hunting a lot faster.

Go straight towards Precision as this makes Take Aim last for 2 turns instead of 1. Making hunting much easier especially for wolves. This will help in combat as well.

Gear: You should have a bow and arrows. Your other loadout can be whatever. Currently I am using a Felling Axe and Home-Made Sword. This works well against wolves as you get 2 attacks instead of 1 as you would with a weapon and shield.

Inventory. Remember that large pelts take 2×3 spaces meaning you can only carry 5 at most. Unless it’s a rabbit pelt then those can fit into a 2×2 space. 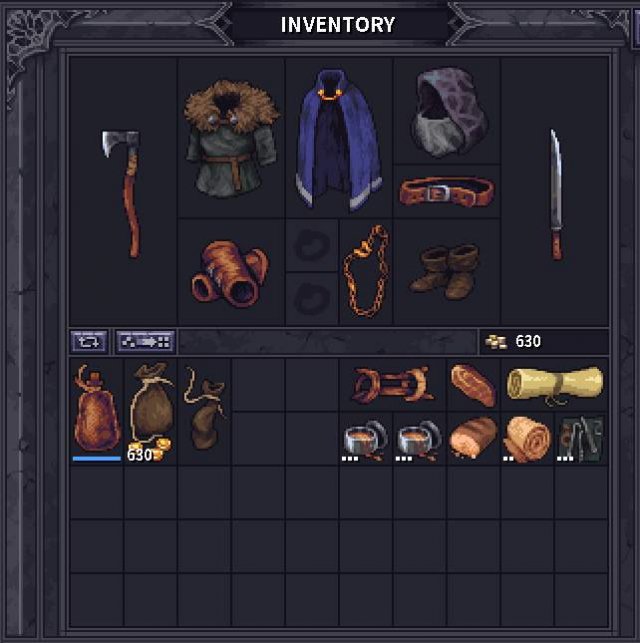 This is how I currently have my inventory set up.

Once you reach the level you want or have a good set up then go ahead and start dungeon crawling. This guide is all about spreading a neat little strategy that can be a lot fun to roleplay and gives you a small edge once you begin going through dungeons. 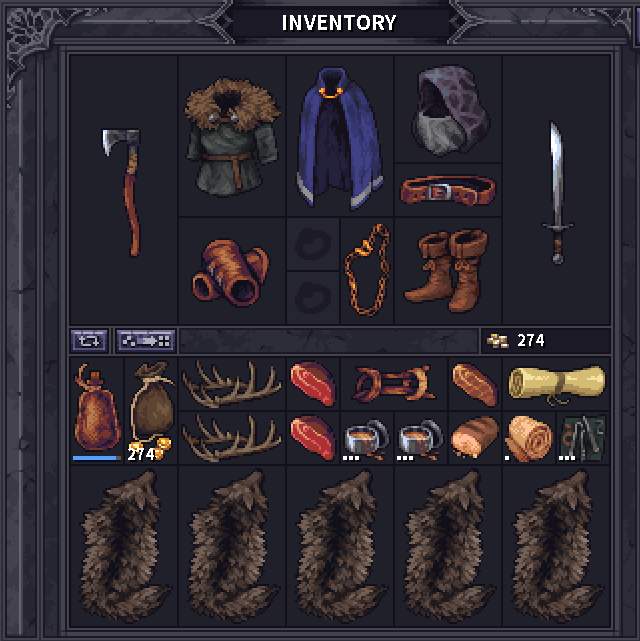 What a good hunt could look like. If memory serves right this should roughly be 300-350~ gold for a few minutes irl time with little to no danger.

From my experience containers in non-respawning locations(cleared camps, Osbrook the starting city)are safe to store items. So far I am using a camp to the south of the starting city as a sort of base of operations storing a few pelts and about 3 stacks of arrows for refilling. Even after sleeping(saving)and closing then reopening the game all the items was still there so unless they reset after a period of time these containers should stay safe.

All your herbs and mushrooms. Herbs Herbs will probably be used to make potions. but until they implement it you can still eat the ingredients (herbs) for similar effects. If […]

In this guide you can find all info about melee in detail. Guide ContentsGuide to MeleeGeneral Melee AdviceGear for All TreesWeapon Tree SpecificsGreatsword (GS)DaggerSwordMaceStaffShieldAxeSpewage of the Unnecessary but Mandatory Highroller […]

Stoneshard – The Best Way to Weaken Then Kill Enemy

The Best Way to Weaken Then Kill Every Enemy! Distance is core for this strategy to work, in cases of hunting or killing enemies. Regardless of your set of skills/class, […]