This is less of a dedicated guide to a specific build path and playstyle and more of a documentation of any builds that I’ve played around with and found, if not powerful in their own right, just interesting to play. I won’t promise you that all of them are gonna be winners, but if you like off-meta stuff, then you definitely want to stick around!

These builds are made in mind that you’ve already completed Iceborne. If you’re going through the game currently and haven’t finished it, if you care about that sort of thing then this is your chance to click off now and go finish the game. Of course, if you don’t, then feel free to keep going and seeing what kind of wack-♥♥♥ builds await you as you careen into endgame.

Or, if you’re looking for something that can take you through Iceborne, and don’t mind playing a support-style build, maybe take a look at other guide to the Mushroomancer skill and see how that works out for you: 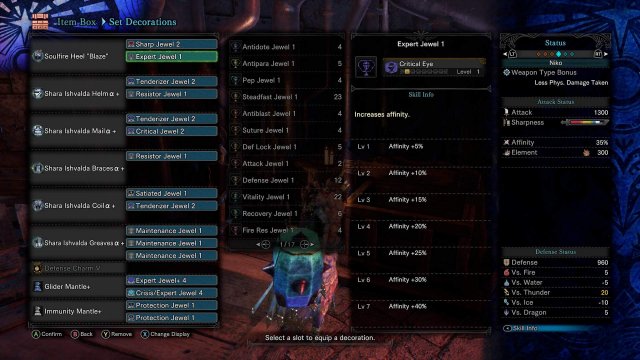 When I finished Iceborne, I immediately ran over to the Smithy to see what kind of fresh hell this rock monster/SoundCloud rapper would have in terms of gear. Boy, was I excited to see a 5-Piece Set Bonus with a monstrously powerful effect. The gears started turning and I decided I wanted to see if I could put together a build that built on all the skills that the set gave, but also worked in mantle usage to maintain True Gaia’s Veil with nigh-100% uptime. The results are a very competitive, but still not entirely meta, build that gives you a myriad of defensive and offensive skills to ensure that you’re living every hunt and not getting bodied by anyone that decides to get fresh with you. Except for maybe Lunastra and Teostra, you might want to still bring Cool Drinks and eat for Elemental Resist for those.

This build doesn’t particularly marry itself to any specific weapon, but if I were to recommend one that can fully take advantage of what this build offers, then I picked the following criteria:

Naturally, Greatsword and Hammer immediately came to mind, but just as well the likes of Charge Blade and Switch Axe could definitely work with this. The weapon I chose specifically was Soulfire Heel “Blaze” from the Lunastra line of weapons because it fit my criteria, gives a nice bonus in the Guts skill which is another emergency defensive skill, and I just like playing Hammer, personally.

Of course, the main headline of the set is the 5-Piece Bonus, True Gaia’s Veil, which grants any Mantle you wear Tremor Resistance 3, Earplugs 5, maximum Windproof, and Flinch Free. This basically turns any mantle into Rocksteady Mantle without the super armor. Because by nature this is a mantle-using build, we want Tool Specialist 3 to reduce the cooldowns of our mantles so we can maintain uptime of this skill. This is basically non-negotiable.

The only consumable items I would deem absolutely necessary are Antidotes, Nulberries, Energy Drinks and Astera Jerky because you need them to proc Coalescence. Ideally you were bringing them anyway, but just in case you needed the reminder, here you are.

Finally there’s the subject of your Mantles:

The Gunlance was actually the first weapon I picked up in Monster Hunter: World when I started playing it. I had a friend at the time who was already playing Lance and I wanted to try something at least a little different from it. At first I didn’t really get this slow, clunky, and unwieldy weapon, so I decided I’d come back to it later once I got a couple more hours under my belt. Needless to say, this is that time. And while looking up Meta Builds for Gunlance, it struck me that a Long Shelling Gunlance only needed a few skills to reach their maximum damage potential, which left me a whole lot of wiggle room to play around. It was then I decided to beef up my defenses to the point where chip damage doesn’t even register because it gets healed automatically.

A collection of ultra-quick guides on what to do once you’ve engaged your target. Guide ContentsIntroductionTerminologyGreatswordLongswordSword and ShieldDual BladesCharge BladeSwitch AxeHammerHunting HornLanceGunlanceInsect Glaive Introduction This guide is an ultra-quick look […]

The damage for elemental Charge Blades is set, making it easy to figure out effective elements on a monster. Elemental damage is absolutely necessary to defeat Alatreon, solo or with […]

This guide could only help a select few people, however, it solved my issue once I did it, as well as another friend’s similar issue with MHW connections. Guide ContentsInfamous […]