From unlocking skill upgrades to utilizing your combat strategies correctly, here are 8 Essential Tips and Tricks to get you started in Dragon Ball Z: Kakarot.

Try To Keep Your Ki Gauge Full During Battle

Boss battles aren’t always easy, so it’s easy to forget in the heat of the moment that all that zipping around and Ki blasts are chewing away at your Ki gauge – the small blue bar that can be seen below your characters health bar. 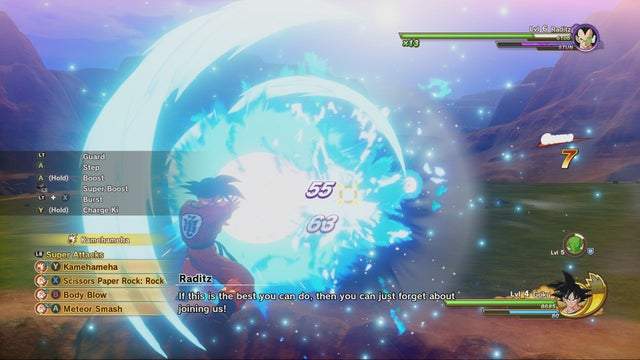 Although it is only explained briefly, it is important to get into the habit of using your Ki sparingly, as it is best used to perform the much more superior Super Attacks.

Thankfully, Ki is quite easy to replenish as it can be recharged by holding down Triangle/Y whenever you have a free moment outside of battle.

There’s nothing worse than being caught off guard during a challenging boss encounter without any healing items up your-sleeve. Having learnt the hard way early on in the game, it’s important to ensure that your health restoration items are always well stocked up and equipped with the menu the system. 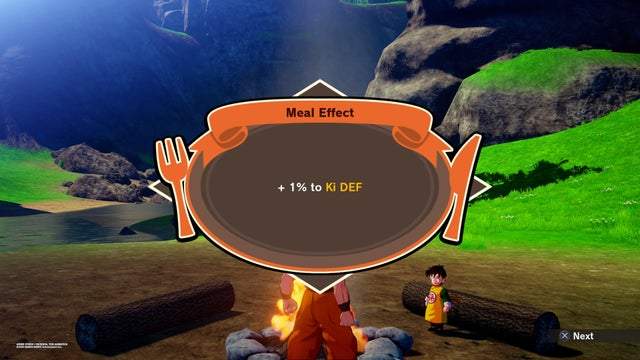 Stuck On Ingredients? Check Out Local Vendors In The Area

Need ingredients on the fly and can’t be bothered to seek them out yourself? Well, you may be surprised to learn that you can actually purchase a whole range of items from local vendors that can be found throughout settlements across the world. These vendors can range from the likes of Item Shops, Grocers, and Cooking Stores.

Surprisingly, these shops tend to stock items that can be used for healing, such as Vitadrinks. So, next time your in the market for some quick items, make a pit stop at one of the nearby villages.

Collect Every Z-Orb That You Can Find

One of the biggest mistakes that I made early on in the game was not collecting all of the Z-Orbs that can be found scattered throughout every location that you visit. 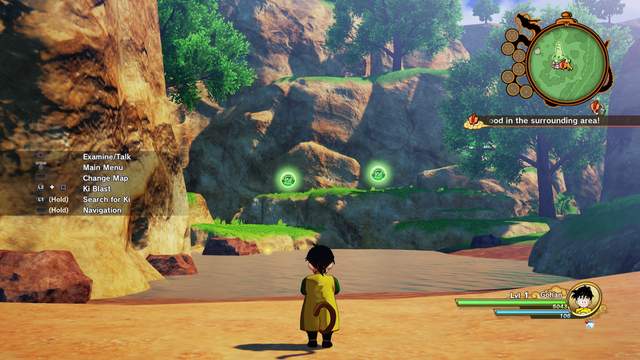 Explained only vaguely during the main story, Z-Orbs are an essential aspect of the game, as they provide the play with the ability to unlock all new Super Attacks and skills that can be used to increase your damage capabilities.

With a total of six different kinds of Z-Orbs available, you will most commonly come across those in the color of Green, Blue, and Red.

To make the collection progress as easy as possible, you can find the following colored orbs in the listed locations.

While many of the Side Quests in DBZ: Kakarot are pretty standard, they do happen to provide plenty of helpful items such as consumables, ingredients, and even Soul Emblems. 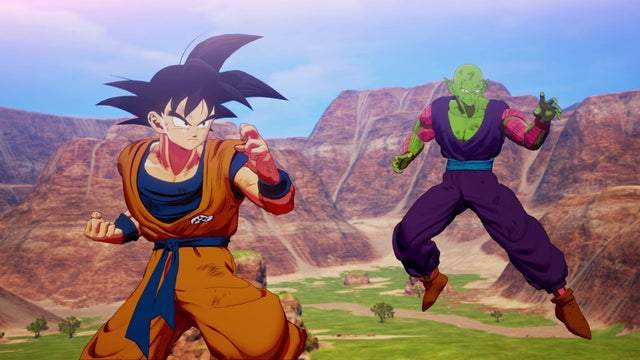 To find Side Quests, simply look for blue exclamation marks on the World Map and Mini Map.

As we have already mentioned, DBZ: Kakarot doesn’t do a very good job at showcasing some of their most important features. For this reason, it’s easy to understand why so many people may be surprised to know that there is actually a way to upgrade their stats and skills through a feature known as the Super Attack skill tree. 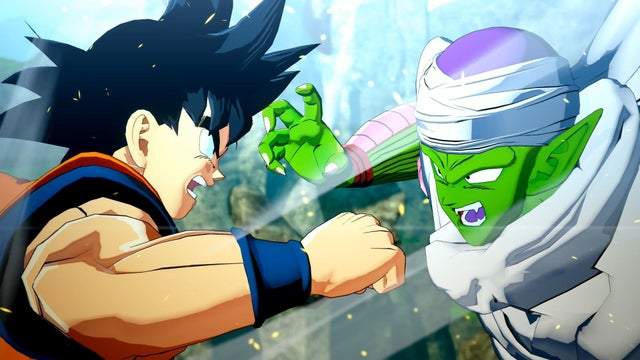 Unless you may have accidentally stumbled upon this feature already, you may be asking what exactly is the Super Attack skill tree? Well, hidden within the Character menu, players have the ability the select a character and press Triangle/Y.

In this menu, players will have several different options that will allow them to either unlock or upgrade their stats and skills. It is worth noting though, that not every option will be available to begin with and many will require quite a large number of Z-Orbs in order to upgrade.

One thing that you will quickly pick up on in DBZ: Kakarot is that Boss Battles are not particularly easy, with many often requiring several tries before you can successfully defeat them. 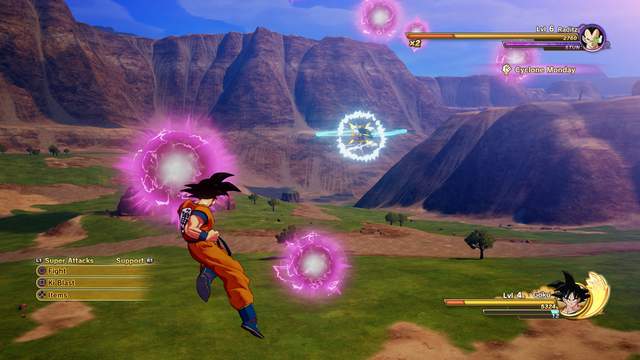 With the button mashing option out the window, it’s important to understand that battles in Kakarot require patience and strategy. While rushing in and hitting bosses with as many attacks and combo’s as possible may seem like a good idea at the time, you’ll quickly come to find that every time the boss manages to perform some rather significant damage in just a short period of time.

To overcome this, take some time to observe the bosses and study their attacking patterns. As you analyse their patterns you will soon come to learn that each boss carefully times their attacks and often perform each of their unique attacks in pattern.

Now that you know their pattern, take it slow, heal up and only enter close quarter combat when it’s safe to do so.

Focus On Blocking and Dodging Early In The Game

The combat system in DBZ: Kakarot is rather complex and apart from a few short tutorials, you are often left to figure things out on your own. 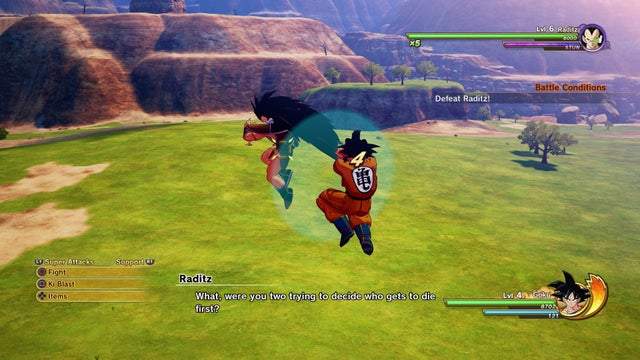 Thankfully, after spending several hours in the game, we highly recommend that during the early stages of the game you work on perfecting your dodging and blocking skills. As a perfectly timed Dodge right before your opponent performs a melee attack will slow down time, allowing you the opportunity to counter your opponents attack.

The Community Board Can Be Extremely Helpful When Used Correctly

When it comes to poorly explained features, The Community Board system may just take the cake, as the essential feature receives very little tutorial help to fully navigate and understand the system. 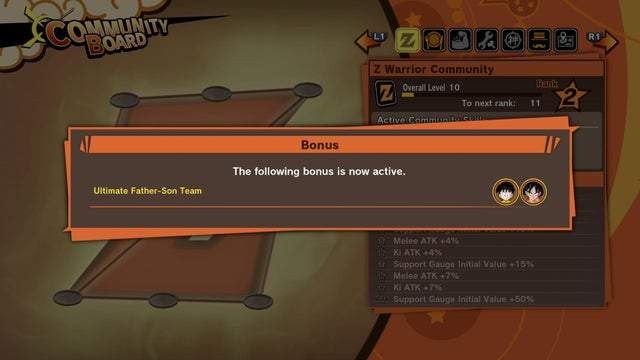 Best described as character cards, Soul Emblems allow you to unlock unique characters – often familiar faces – that can be used to obtain additional bonuses when added to Boards.

These bonuses are often seen in the form of improved fighting stats, improved cooking success, increased experience rates, enhanced food bonuses, and extra money rewards. Although the rewards are often small, they will definitely start to make a difference once they begin to stack up the further you improve them.

Dragon Ball Z: Kakarot – How to Get Zeni Fast