Ways to survive against the Knights.

First of all, it is absolutely natural if your squad is not equally effective against different enemies. The game is designed to ensure that it’d be impossible to create a universal squad, tactics or learn a certain set of talents that work equally well against any enemy.

Knight is specializing in destroying single targets. He has decent Health and huge – the biggest Damage in the game. The size of the Damage is very depending on the talents you’ve learned.

Your units in the front line can use the ‘Defensive Stance’. Together with regeneration or a Herbalist in the back line, this will be enough so that the Knight would not be able to kill anyone in your front line.

All talents and items with Armour Increase do perfectly reduce the Damage done by the Knight. In addition, the Knight’s Armour Piercing parameter does not grow with new levels.

Buffers and Herbalist can also increase Armour for allies.

The Sentry’s ‘Defence Instructor’ talent branch can be very useful, as all units in the squad will receive an incredible Armour bonus in the ‘Defensive Stance’.

Scrolls of Regeneration together with Damage Ward are also very helpful.

You can use items with increased Armour and rush everyone to attack. It is possible that you will kill the Knight in the second round – before he has time to finish off at least one of your units.

If your Grove Keeper uses the ‘Potion of Invulnerability Touch’, then, together with healing, he will impose an Armour increase immediately on all units in the squad (2 charges of Armour each). It is crazy effective.

The traditional tactic is three tanks at the front and damage dealers at the rear. If you have a Sharpshooter, then things shall go smooth.

The safest way is to use the talents with Return Damage hence they allow you to spend more turns in the ‘Defensive Stance’. These are ‘Retribution Shield’, ‘Dragon Skin’, ‘Stinging Vines’ and ‘Thorns’. The minus point is that everyone in the front line needs to learn such talents.

Front-line Sentries who have learned ‘Living Armour’ and the talents with increased Armour will do a very decent amount of True Damage and will receive relatively little Damage in return.

If you have a summoner, and you are not afraid of remote enemy attacks, then summoner can throw one elemental into the front line per round, feeding them to the Knight. No matter how terrible the Knight is, he will not kill more than one target per round and will never dig to your back line. With the summoner in your squad, you should have one or two empty slots in the front line.

The Knight is an excellent target for the Sharpshooter’s ‘Fire Arrows’ because the amount of Damage depends on the Health of the target. 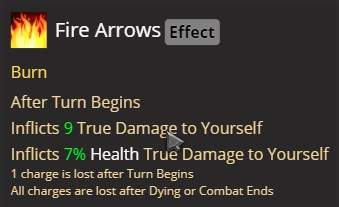 Might is Right Guides: Basic Guide (Tips for Starting). How to Quickly Increase the Size of Your Squad to the Maximum. How to Pump a Low-Level Mercenary? How to Play […]

Might is Right – How to Win the Combat against Boss Barbiche

Aspects of Magic Barbiche’s strength is not with his parameters, which are very modest for a Boss. A Sorcerer can do more damage than Barbiche. Barbiche’s talents are made in […]