Guide on how to unlock the Offense Is the Best Defense achievement.

What We Have to Know about the Achievement

Offense Is the Best Defense

Defeat all opponents before constructing a Wonder in the sixth Saladin mission “The Lion and the Demon”.

To obtain this achievement, you have to win by defeating the five enemies of this mission, without building the Wonder.

Seems to be difficult, because you have to fight alone against five enemies (1 vs 5). But with a good unit management and fast attacks you should be able to complete it without any bigger problems. 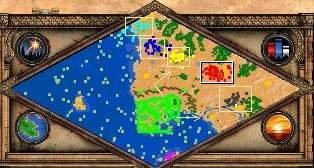 Located in the southeast of the map.

The first enemy, that you will defeat in this mission.

There is not much to say about Jerusalem, because they will resign before they do something.

You can easily defeat him using only the 4 galleons, which you are given from the beginning. 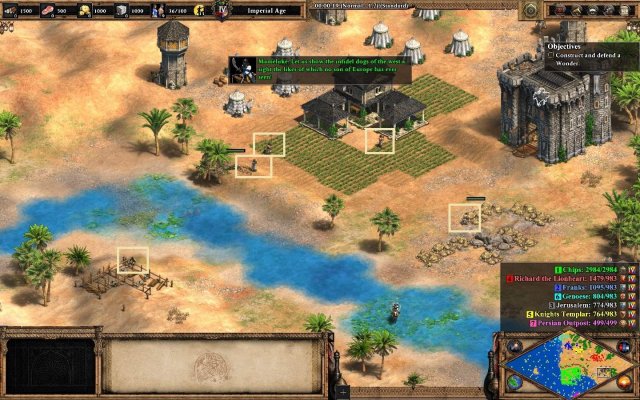 Located in the northeast. Yellow starts with a Town Center, Towers, a castle and some paladins, that scout the area.

They create paladins, capped rams and teutonic knights (at the time you attack him, they still don’t create military units).

If you manage to kill his paladins at the start of your attack, it’s easy to destroy his base. Located in the north, near Yellow’s base.

He starts with a town center, siege workshop and 3 towers for defense.

He has 3 bombard cannons and 2 siege rams. At some point he’ll use it against you (around min 2-3). At the beginning he sends a group of paladins to explore the map, they might attack you.

He constantly creates hand cannoners, so be careful. 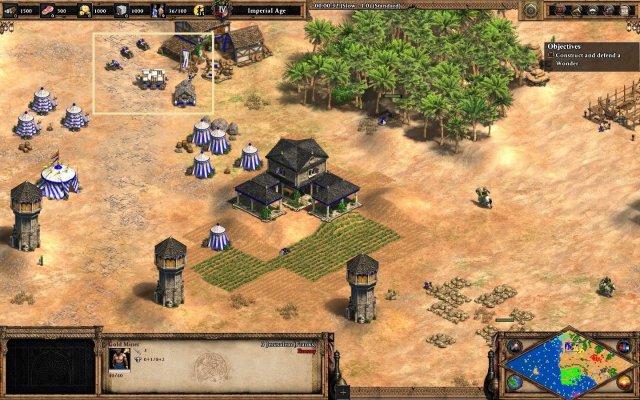 Located in the north (behind blue’s base). I consider Teal as the easiest enemy to beat with units.

Genoese only has towers as defenses, so it’s not difficult to defeat them.

They only prioritize on creating ships and villagers, they don’t have military units / buildings. 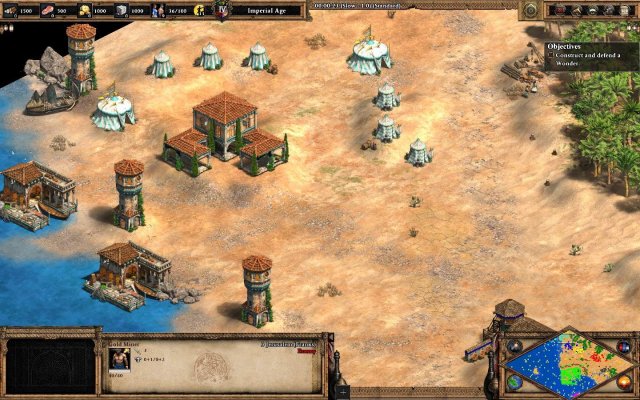 The last enemy that you’ll defeat in this mission and the most difficult in my opinion for his defenses (towers, castles) and units, which he constantly spams.

He tends to create a lot of units at the moment that you attack him (Siege Units, Cavalry and Longbowmans).

Be careful when you are going to attack him, it might become complicated. 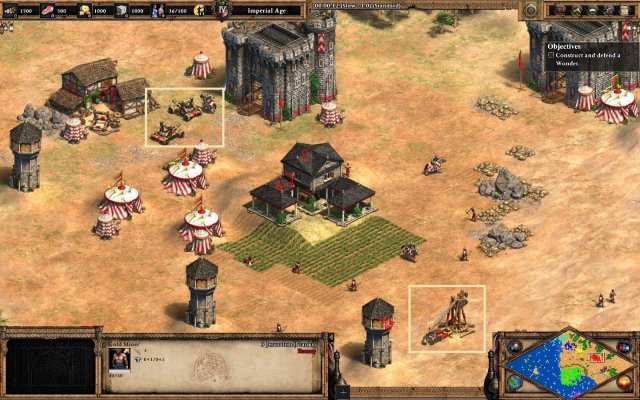 Note: You should do both things at the same time. I strongly recommend to use F3 (Pause) at the beginning because you can prepare all the things that you have to do without losing time.

You can pause and unpause anytime!, don’t be afraid to use it.

You’re starting with a big army – 4 galleons, 4 fishing ships and 9 villagers (6 near the town center and 3 in the gold camp). 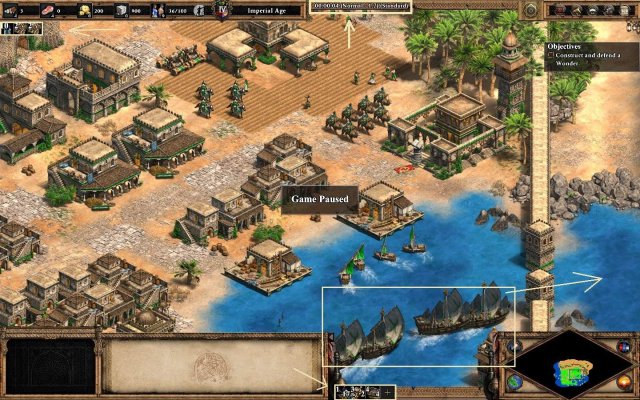 You should do these things, before attacking the enemies:

When you have your trebuchets ready in the north, you can start the attack.

Balance your economy, produce villagers (max 55 – 60) and military units(Mamelukes).
Food and Gold are essential for units and technologies, so focus on these resources.
When you have a good quantity of resources, reseach technologies for your mamelukes and trebuchets.

Take all your galleons and send them to the east, a few seconds later you can see a small passage that takes you to Jerusalem (Around 00:40 – 00:50).

When you reach his city, kill all the villagers (prioritize the villager that is building a blacksmith).

Two things can happen in that moment:

Grey will resign at some point in the game, so dont worry about it. 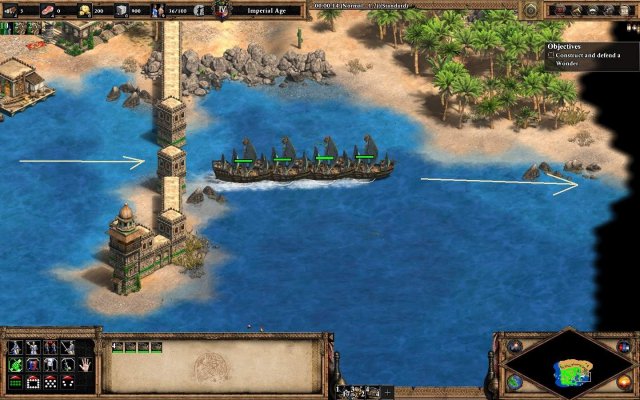 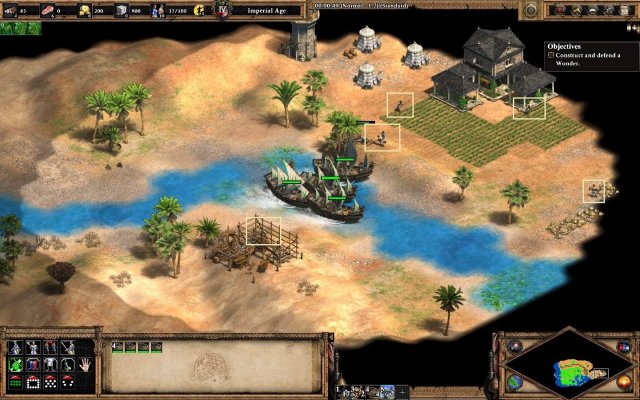 Now that we have everything to continue, you should start attacking yellow first.

The strategy is simple: defend your trebuchets, while they destroy buildings.

Tip: Before using your trebuchets, you can use your army and attack a yellow building to force their paladins to attack you. After that it’s easy to destroy Yellow’s base. 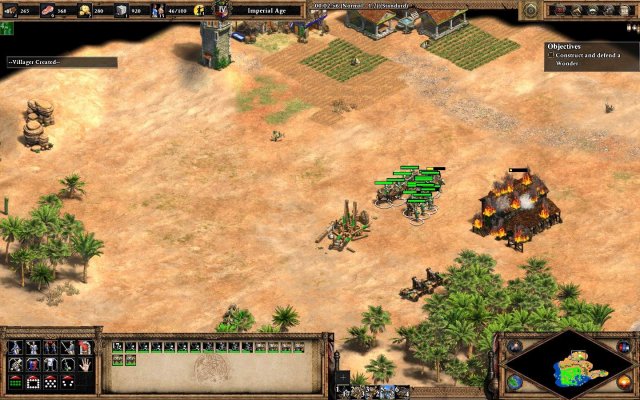 ⠀
Around min 3 – 4 (game time) blue is going to send their Bombard cannons and Siege rams to attack you, so be prepared to destroy them before they attack your trebuchets.

After that, blue only tends to attack you with hand cannoneers.

If there are no enemies, you can use your units to attack their villagers and your onagers to destroy other buildings. 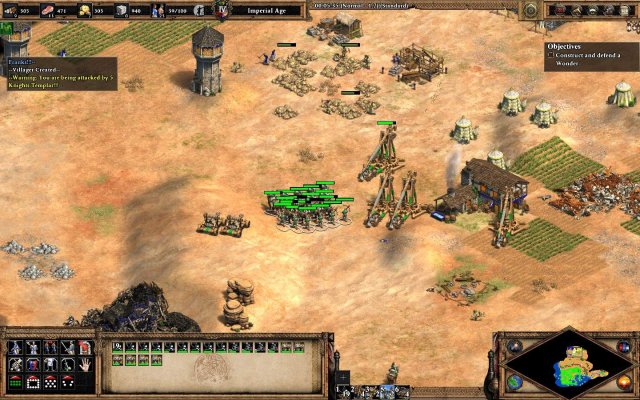 When you manage to destroy their defenses, it becomes easy to play aggressive.

If you want to destroy them faster, create more trebuchets / mamelukes and research technologies.

When you finished destroying their bases, try to find the villagers that escaped when you attacked them. 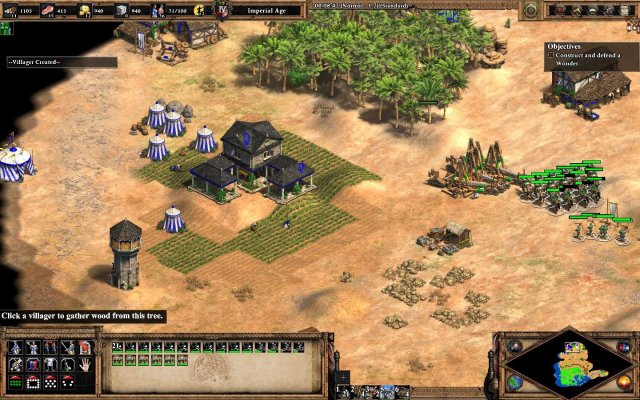 Your enemies resign when you destroy their important buildings, killed all their villagers and military units.

It’s not necessary to kill all the villagers, while you attack the bases. You can finish them off at the end.

If teal doesn’t resign when you destroyed his buildinds and villagers, you have to use your galleons and kill their ships near the coast. 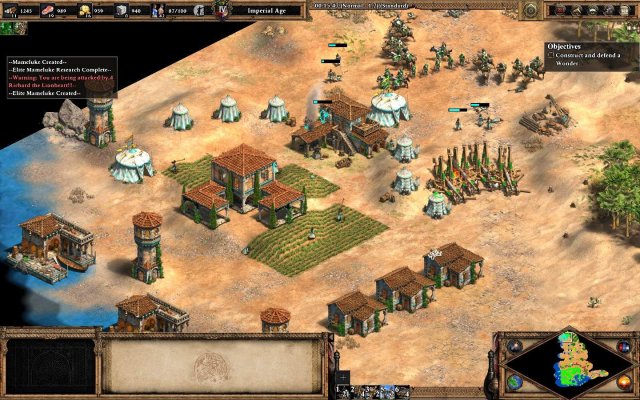 Now only 1 enemy remains. The most difficult to defeat, if you compare him with the others.

By now, red has a big army and tends to create units constantly, so you must be careful when you attack.

The best way to defeat red is to aggro theirs units outside (where you can attack them without receiving damage from the castles / towers), before starting the siege.

When you attack a building with your army, they attack with a variety of units (Onagers, Scorpions, Paladins and Longbowman) and start creating more units.
When you use your trebuchets, they will attack you with Rams and trebuchets (Heroes / Normal).

Around minute 25, your ally sends you a ship with elephants. Useful to tank damage, while your units try to destroy the base.

When you manage to destroy a big percent of his army [specially onagers and trebuchets (Heroes / Normal)], you can start attacking his castles to stop them to produce more units.

After destroying the castles, towers and the town center, it’s time to find the villagers. You have to explore the map to find them, red villagers tend to try to build a new town center or military buildings. 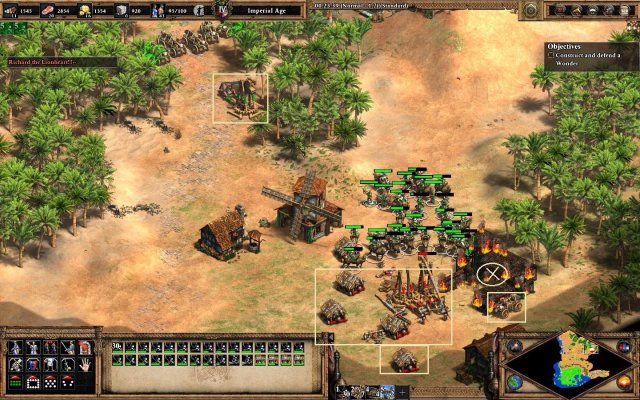 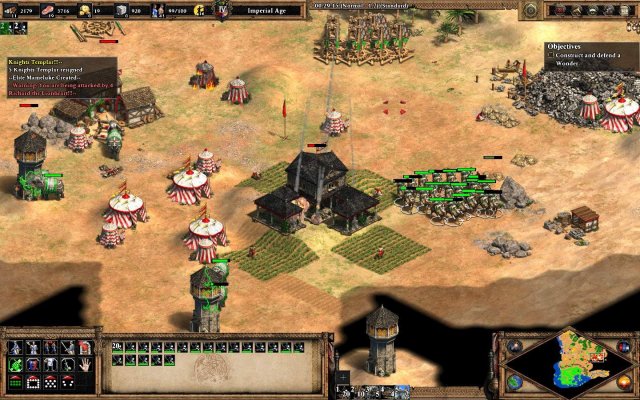 When all the enemies are defeated, you will obtain the achievement (and the victory too).

Easy to follow build order sheets. Build orders with a similar start are combined together to minimize the number of sheets. This guide contains 11 build orders in 3 sheets. […]

A comprehensive guide to all the cheat codes in the game. How to Enable Cheats While in-game, hit the Enter key or click the Chat icon in the top-right. That […]