Trying to use Sumika’s hyper to steal Miracle Walker? It’s harder than you think!

The New Toy, and the Discard Pile

On December 23rd, the OJ community was graced with this new hyper, among other additions: 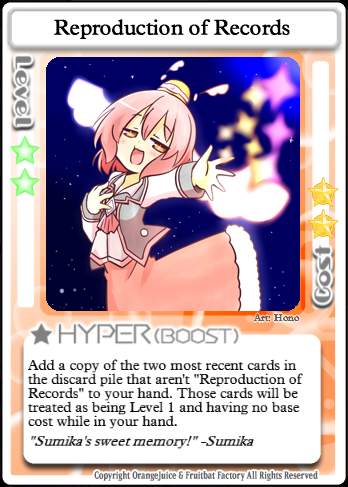 This card, as written, attempts to pull two cards from the discard pile, producing copies that can be played at any level for free. …thing is, this is not the discard pile.

This is a list of the most recently played cards and/or activated traps.

The discard pile is an invisible pile containing only the cards which should be reshuffled into the deck, should it run dry. This includes cards that are played as well as those discarded, either by traps or by having a full hand.

This does have moderate overlap with the played card list you can see in-game, but that list doesn’t show discarded cards. And unless Sealed or Melting Memories is in effect, you won’t have much of an idea what your opponents are discarding.

Oh, and this doesn’t fit in any of the following categories: Cards with variable star cost, like x16 Big Rocket, will NOT become free to play. This is not a bug.

What Can It Copy?

Most cards played or discarded can be copied. Notably:

What Can It Not Copy?

Cards created from other cards, or otherwise are not part of the deck, cannot be copied. Some other restrictions apply:

The following cards discard other cards when played:

Bad Pudding discards itself first, followed by the card it chose to take with it.

The other four discard themselves first, followed by the entire hand they are targeting from left-to-right. Note that the small versions of hands next to Player 2 and Player 4’s portraits are in reverse order.

For example, if a player steps on a Flamethrower and discards Dash, Mimic, and Invasion (assuming none of them are copies), the two cards at the end of the discard pile will be Invasion and Mimic.