This beautiful world was created by the civilization of the Ancients. For reasons unknown so far, they disappeared but left behind a legacy of many secrets, mysteries, artifacts, and most importantly – technologies.

This world is completely devoid of any magic and consists of two continents and many islands.

The main values of the world are resources and Bastions. A guild that captured a Bastion controls its surrounding area.

The World map button is located in the upper right corner of the interface. 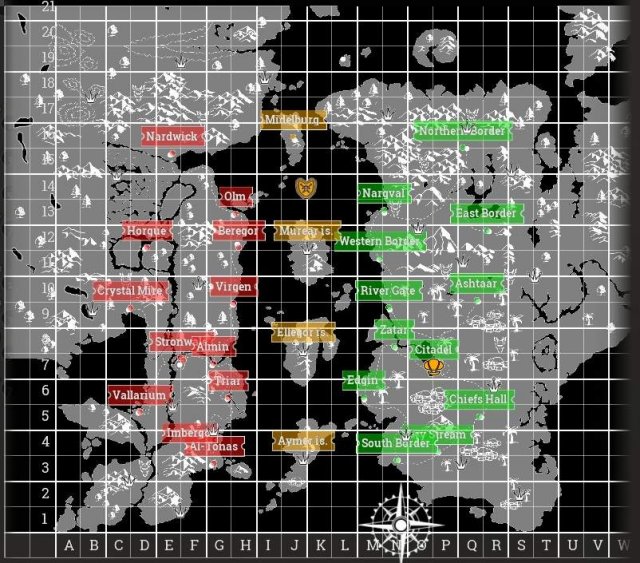 Humans were the first who discovered the obscure World of the Ancients. They chose the best lands with a mild and humid climate. Soon, they have established a state – the Iron Empire. The first explorers found ancient castles abandoned hundreds of years ago by the unknown Creators of the world. Inside the castles, humans came across something now considered as the secret of aviation, the things named cores. The Empire fights to gain control over the islands in the centre of the world because that is the place rich in most valuable resources. These resources are the key to the future prosperity of the Iron Empire.

Orc tribes were long engaged in the lasting war for dominance in their world. Only the invasion of the unknown enemy named Rarg-Ush forced them to unite into the Blood Red Union of Tribes and then run seeking salvation in other worlds. When they got into the World of the Ancients, they faced another opponent who arrived earlier – the humans. After being defeated in all major battles, they finally managed to reveal the secret of flying, but still had to retreat into wastelands. Now, they are accumulating power to fight back for their freedom and the treasures hidden in the islands in the centre of the world.

Be careful. Do not fly too close to the cities of the enemy faction. If your ship is near enough, it will be immediately attacked. Any of the factional cities can be used to build ships, store resources, and produce weapons, ammunition and armour.

The scarcest and most valuable resources are hidden in the bowels of the three central islands: Aimer is., Ellegor is., Murear is. Each island is connected to the Bastion, to the warehouse of which a % of all resources extracted on the island are automatically transferred. In addition to that, the Bastions generate a certain amount of resources on their own.

There are fierce battles for control over the islands.

To toggle the map mode and see the resource map, press the “Resource map” button. 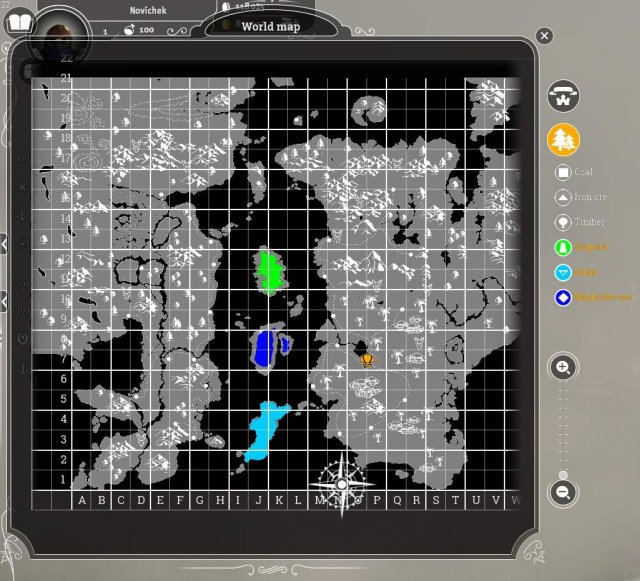 Each new player is granted with beginner protection. While it’s active, your property cannot be destroyed by other players, but you cannot attack anyone too. To remove the protection before it expires, buy and activate “Letters of Marque and Reprisal” in the flight centre of any city of your faction.

The ships of a player that is under the beginner protection still can be destroyed in combat zones. Combat zones are: Aimer is., Ellegor is., Murear is., the areas around each of the Bastions (regardless of the faction) and the “War” event.

Each player can create an unlimited number of characters of any fraction. The first two characters can be created for free. Creating any subsequent character costs gold louis d’or. Even if you are really willing to, you cannot delete the last two characters.

You can choose and buy a portrait to any character.

Skills open up new horizons for each character.

The level of your character grows by getting achievements. The higher the character’s level, the higher skill levels are available to learn.

Each faction has unique airships and ships. You need to learn the skills to build and pilot most of them. In the World of the Ancients, two types of ships are used: cargo ships and combat ships.

All movement is carried out only by air. Depending on the Pilotage skill, you can pilot one or more ships. Control a ship using a keyboard, mouse, or control panel.

It is possible to control ships even if they are in other cities. Open the Property tab – select a city – select a ship – select an action. 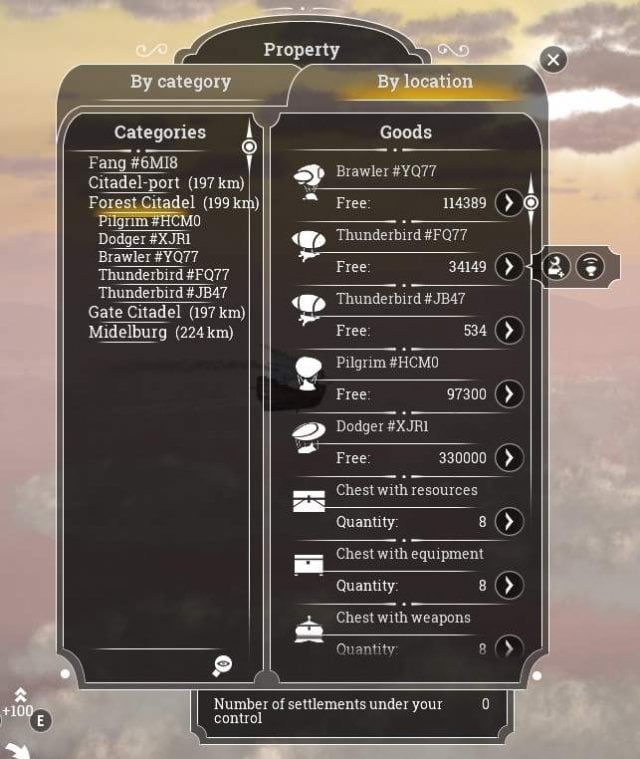 To remotely control a ship, use the Remote ship control panel. It can be found under the portrait of a character.

Every Ship Has Insurance

Every ship (build or bought) has insurance. It lasts forever and you don’t need to buy it. If your ship is destroyed (shot down or burned from exceeding flight altitude), it will be moved to the capital of your faction with 1 point of strength. This ship will drop all contents of the hold and some of its attachable equipment at the crash site.

Before building/buying a ship make sure to check its characteristics. To do this open the Market, choose Ships and select a ship. 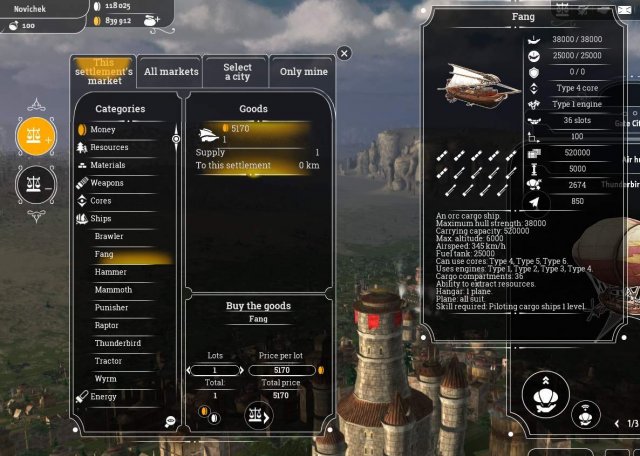 Or open the Shipbuilding and select a ship. 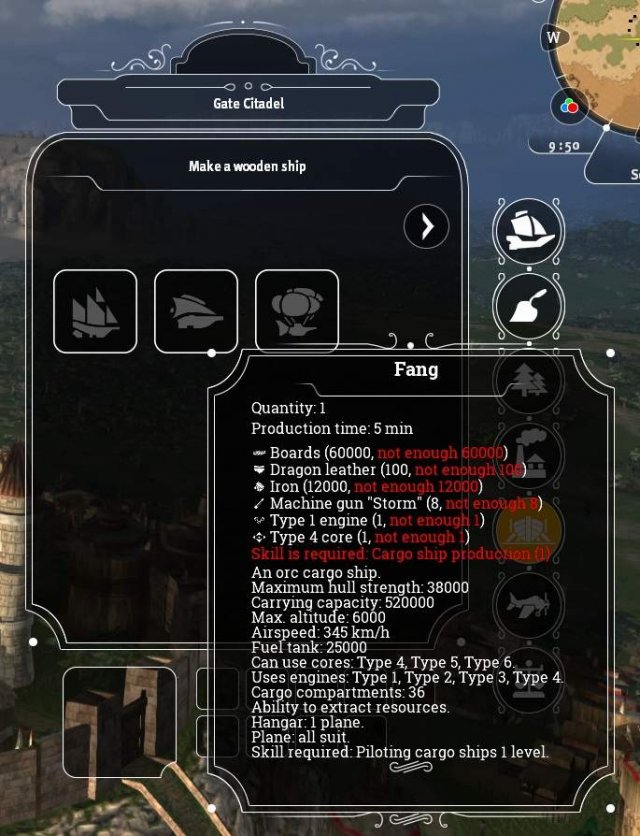 Installation and/or replacement of equipment can be done only in the Air hub of a city or settlement.

A ship cannot take off without a Core. Different types of ships require different cores. Cores vary in power. A core enables a ship to manoeuvre better, increases flight speed and rate of climb.

To increase airspeed you can also use the Glide mode or a Ruby resonator.

Each ship has an Energy shield. An energy shield and strength are restored automatically if a ship does not take damage for more than 1 minute of real time.

Ships’ weapons have infinite ammunition of high-explosive shells. Armor-piercing and fragmentation shells must be produced/purchased and loaded separately.

Gates are means of teleportation that can be used to travel around the world. The gates can be found near all major cities. Anti-aircraft platforms of cities do not reach gates. To teleport the ship must be inside a gate. Press the Teleport button and select a city you want to move to. Teleportation is instant. 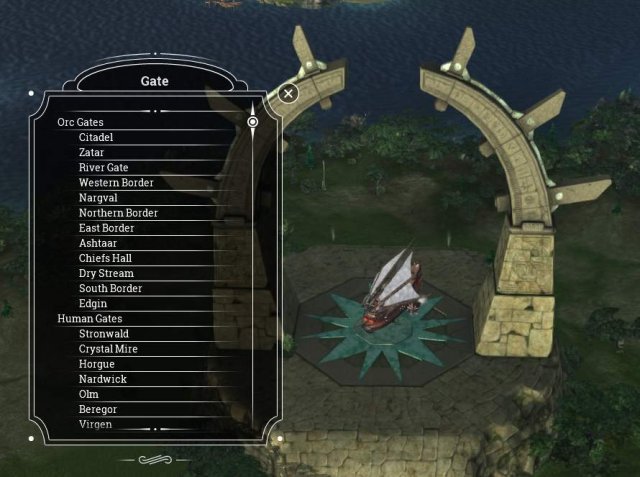 Do you want to move to participate in the capture of a Bastion on the central islands? Or maybe you want to move to the Battlefield of the factions’ fleets? To do this, approach a city of your faction and press the “Fight!” button (it’s to the left of the minimap). Then select where you would like to move. You will be transferred instantly, but only in one direction. You have to fly back by yourself. 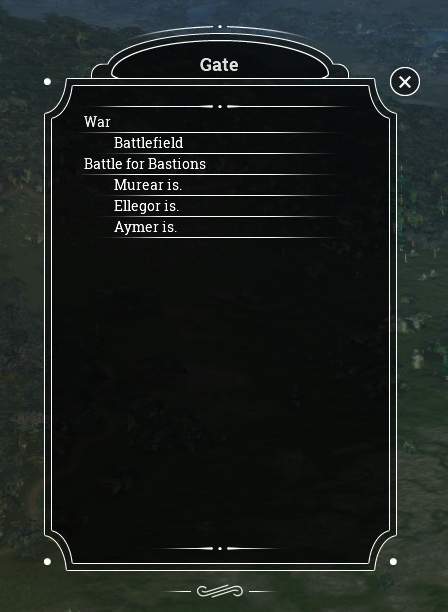 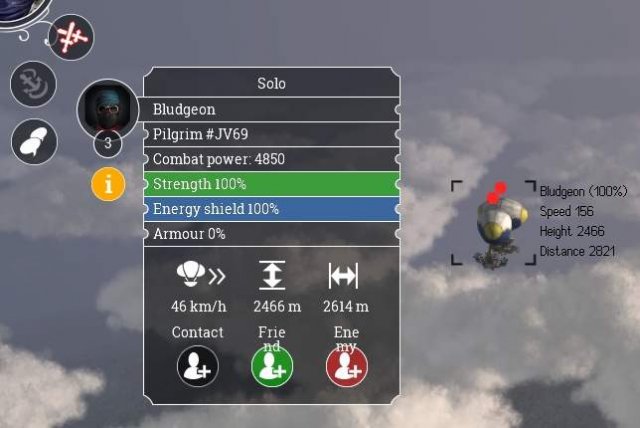 Click on a ship to open the actions window. Check the tips for each button. Here you can select any of the available actions.

The Lock on a target button enables you to aim your weapons to an enemy. Press and hold the Spacebar to attack.

Trading caravans connect all the cities of the world. These caravans are not formed by players. Caravans’ holds are full of different valuable items. Players can form caravans of their ships by themselves.

The world of the Ancients is inhabited by fire-breathing dragons. Dragons are a force to be reckoned with. They live in deep caves. Several dragons can take down an unprotected ship in a few minutes. Killed dragons leave you trophies: eyes, skin, and meat. You can use them later to make some profit.